The disposal of Deutsche Telekom's phone business in Romania seems to have been a talking point for years. On Monday, it became a reality when a deal was announced with France's Orange for the controlling stake in Telekom Romania Communications (TRC), the former state-owned incumbent that provides fixed-line services to Romanian consumers.

Orange is paying 268 million (US$318 million) for a 54% stake in TRC, valuing the entire business at just less than 500 million ($594 million). For that fee, it gains control of a business that serves about 930,000 broadband and 1.2 million TV customers, generating 622 million ($739 million) in annual sales. Of particular interest will have been TRC's fiber-optic network, which snakes over a distance of 90,000 kilometers and covers about 3 million homes.

The deal essentially switches majority control of this asset, and its customers, from one of Romania's mobile operators to another. While both Orange and Deutsche Telekom already had mobile assets, Orange has never had a fixed-line business to go alongside them. That was seen as a deficiency by an operator that champions fixed-mobile convergence. In most of its other big European markets, Orange owns both types of network.

As part of the deal, Orange will take control of about 881,000 customers buying fixed and mobile services on the same plan. The switch will result in a mobile boost for Orange and a slump for Telekom Romania Mobile (TRM), Deutsche Telekom's mobile asset, as customers are moved between networks. 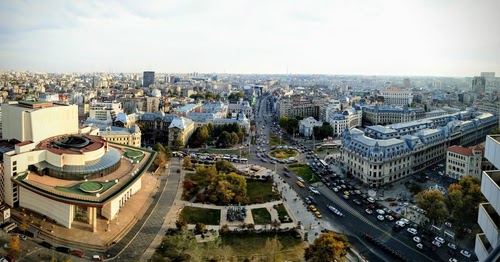 Downtown Bucharest, where Orange may soon have a fixed-line network offer.

Convergence is important to Orange partly because it lessens the risk of churn. In Romania, its mobile business had faced competition from three rivals with fixed-line assets  Telekom Romania, Digi Communications and Vodafone, which bought a cable business off Liberty Global last year. Orange's mobile-only customers might have been lured to low-cost bundles of fixed and mobile services.

With Orange now planning a major convergence push, competition looks set to intensify. And given the success of Orange's convergence strategy in markets like Spain, Romania's other service providers will be worried. There is also a substantial opportunity to slash costs, by eliminating overlap between the merging companies, and to cross-sell various services to different customer groups.

The divestment indicates Romania is no longer a priority for Deutsche Telekom, and that a sale of TRM remains a possibility. Shorn of the fixed-line business, Deutsche Telekom will be in the same mobile-only predicament as Orange. If it believes it can thrive without TRC, it has previously attached as much importance to convergence as the French operator. In its last annual report, Deutsche Telekom said: "we work continuously to improve and expand our convergent portfolio."

A sale that included TRM would certainly have been harder to get past officials. Regulatory authorities, which have yet to approve the fixed-line transaction, might have kicked up a fuss about the disappearance of a mobile operator and its impact on competition. Yet Deutsche Telekom's mobile asset will clearly be weakened by the transaction with Orange. Finding a buyer for that unit would subsequently be difficult.

The German operator has evidently been disappointed by its recent experience in the Romanian telecom market. In December, it wrote down the value of its assets by 320 million ($380 million) after "business development that was worse than expected on the back of intense competition." Accounts for the June-ending quarter show that its broadband and TV businesses lost about 9% of their customers during the previous year. The mobile business shrank 10%, to about 4.7 million subscribers, due to losses at the prepaid division.

Lack of control has always looked like a problem for Deutsche Telekom. It owns shares in TRC and TRM through its 46.9% stake in OTE, the Greek telecom incumbent. Indirectly, this means it owns only about a quarter of TRC. The deal with Orange simplifies the ownership structure and leaves the French operator as the controlling shareholder. It may have more freedom to steer through organizational and strategic changes than Deutsche Telekom has enjoyed.

For that same reason, the deal might yet encounter resistance from the Romanian government, which owns the other 46% of TRC. Orange does not expect to finalize the transaction until the second half of 2021 because of the drawn-out approvals process, which involves the European Commission as well as "other relevant authorities." Jefferies, a bank, said the "anti-trust process will be interesting" in a research note today.

If Orange can make it work, Romania holds plenty of attractions. With a population of nearly 20 million, it is one of the largest countries in central and eastern Europe. And before coronavirus struck this year, its economy was one of the fastest growing in the region. Deutsche Telekom's exit signals a major retreat, but it means the German incumbent will be able to focus on markets where its performance has been stronger.