Why Deutsche Telekom could exit Romania

For several months, Deutsche Telekom has been dogged by rumors that it wants to quit Romania and retreat from one of the biggest markets in its European empire. Press reports in recent days say the German operator is in talks with several investors. RCS&RDS, a local operator, has been identified as a potential buyer of Telekom Romania's cable TV business, while Orange is said to have an eye on its mobile assets. The fixed-line network appears to have attracted the interest of a Russian investment fund.

Spokespeople for Deutsche Telekom have dutifully declined to comment on "media and market speculation." But the reports have mounted, and the details of prospective buyers make them hard to ignore. Deutsche Telekom is seeking $1 billion for all its Romanian assets, according to some outlets.

The medieval city of Sibiu in central Romania.

A divestment could rid the German operator of a troublesome unit that has persistently underperformed. First-quarter revenues dropped 4%, to about 217 million ($244 million), compared with the year-earlier quarter, and earnings slumped more than 21%, to 26 million ($29 million, before interest, tax, depreciation and amortization), despite headcount reductions.

Sales dropped even though Telekom Romania finished March with 5.42 million mobile customers, about 61,000 more than it served in December. Deutsche Telekom blamed the revenue squeeze on falling prices in Romania's competitive mobile market. It also lost customers at both its fixed telephony and broadband divisions.

Unhappiness about local conditions appears to have intensified with the government's recent introduction of a special tax on the telecom sector. Under new rules announced in December, authorities increased their "monitoring tariff" from 0.4% to 3% of annual turnover and attached similar rates to spectrum licenses, provoking a backlash from Romanian operators. 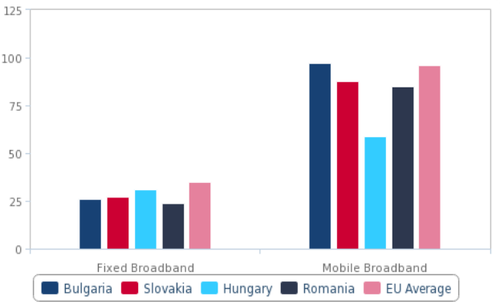 Fitch Ratings thinks the legislation will hinder the deployment of 5G networks in Romania and could drive some investors out. "The new measures introduced by the ordinance could present Deutsche Telekom with a further reason to exit the market," said the ratings agency in a research note.

Deutsche Telekom's lack of control might also explain its interest in quitting Romania. While it owns majority or full stakes in most of its other European subsidiaries, it holds shares in Telekom Romania through its 45% stake in OTE, the telecom incumbent in Greece. The shareholding structure is complicated. Despite the single brand, Telekom Romania is formed of two companies: Telekom Romania Communications (previously Romtelecom), the fixed-line business; and Telekom Romania Mobile (previously Cosmote). Local press reports indicate that OTE owns 54% of the former and 70% of the latter, with the remaining shares mainly in government hands. Indirectly, this would leave Deutsche Telekom with just 24.3% of the fixed-line business and 31.5% of the mobile operator.

This situation could make a divestment hard to negotiate and potentially involve Romania's government in sale talks. Attracting buyers may be difficult in what Fitch describes as a "worsening business environment," too. Conditions are deteriorating, says the agency, "lowering the attractiveness of the country as an investment destination." Any opportunity for Orange or RCS&RDS to merge assets could hit the usual opposition from national and European authorities keen to preserve existing levels of competition.

Strategically, a Romanian retreat could raise awkward questions for Deutsche Telekom. Group CEO Timotheus Höttges has long spoken of Deutsche Telekom's ambition to be the preeminent communications player in central and eastern Europe. With a population of nearly 20 million, Romania is that region's third-largest member of the European Union (EU) after Germany and Poland. If conditions are bad today, they might improve in the years ahead. And the future emergence of a more unified, "cross-border" EU market for communications services could bode well for telcos with an extensive regional footprint.

Romania has also been a part of Deutsche Telekom's efforts to build a single "pan-European" network, based on the same cloud platforms. For one thing, it has opened a service operations center for this network in the Romanian capital of Bucharest. Take out a big country like Romania and the pan-net efficiency story becomes far less compelling.

The attractions of a Romanian retreat
On the other hand, a tidy sum for Romanian assets could be reinvested elsewhere and allow Deutsche Telekom to focus on more important countries where conditions are also tough. That includes its domestic market, where it this week launched a limited 5G service in Berlin and Bonn after spending nearly 2.2 billion ($2.5 billion) on new spectrum. Blanketing other parts of Germany with a 5G service will maintain the pressure on capital expenditure, which outside the US has risen sharply from 14% of revenues in 2013 to a fifth last year.

Deutsche Telekom's balance sheet has also become a concern for analysts after accounting changes and some other factors led to a sharp increase in net debt -- from 55.4 billion ($62.4 billion) at the end of 2018 to 71.9 billion ($81 billion) in March. That gives the operator a net-debt-to-earnings ratio of 2.65 and puts it close to a new comfort-zone limit of 2.75. "Our numbers don't indicate that we're going to leave the corridor  but there is going to be very little wiggle room," said Höttges during the last earnings call. A sale in Romania might offer some relief.

Perhaps the main uncertainty is what happens in the US, where Deutsche Telekom is desperately trying to secure regulatory approval for a merger between its T-Mobile subsidiary and rival operator Sprint. If this eventually goes ahead, it is likely to consume the attention of senior executives and gobble up financial resources for some time. Europe would naturally assume less importance, and any desire to maintain a presence in Romania could fade. Höttges's heart might be in Europe, but he knows in his head that Deutsche Telekom's best growth prospects lie far away from it.