France's Iliad mounted a surprise attack on Italy in 2018, causing as much carnage as a wooden horse loaded with bloodthirsty Greeks in the ancient story of the same name. Since its arrival, Telecom Italia, Vodafone and Wind Tre have lost more than 12 million mobile customers, while Iliad has picked up more than 8 million. The number could now swell to more than 26 million in the next phase of the French conquest.

That's because Iliad is preparing to buy Vodafone's Italian unit, according to a Bloomberg scoop that cites people with knowledge of the matter. It has already submitted a bid to Vodafone's board, says the report, and markets seem to have taken this mouse-swallowing-the-cat story half-seriously. Vodafone's share price closed up 2.4% yesterday in London after the news broke, just weeks after a separate Reuters report about a possible tie-up. 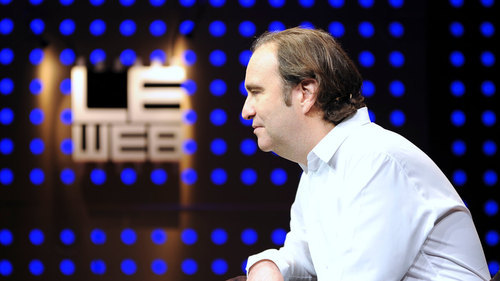 Europe's operators are certainly desperate to merge in what is arguably the world's most competitive region for mobile telecom services. A regulatory obsession with ensuring there are four networks per country has weakened investment returns and forced operators into network-sharing ventures and capital-raising infrastructure spin-offs. Debt levels remain stubbornly high.

Right now, no one seems to have greater enthusiasm for consolidation than Nick Read, Vodafone's under-pressure boss. His firm's share price, despite yesterday's small gain, has fallen 7.5% since he took charge in October 2018 and is worth 42% less than it was in December 2017, when Read was chief financial officer. Cevian, an activist investor, is reported to have taken a stake in Vodafone and begun agitating for a portfolio shake-up.

Suddenly, consolidation is at the top of Read's agenda. "There could be circumstances where a particular market does not meet the [strategic] criteria and in those situations we will be very proactive and very pragmatic at finding other alternative solutions  joint ventures, us moving into a majority controlling position, us moving into a minority controlling position or a disposal," he said on a call with equity analysts last week. "We don't close down options."

Italy has not been kind to Vodafone in the Iliad era. Besides losing customers, it has clocked up seven consecutive quarters of declining service revenues, with the figure down 1.3%, to about 1.1 billion ($1.3 billion), for Vodafone's recent third quarter. It was thanks only to growth at Vodafone Italy's smallish fixed-line business that its service revenue performance was not worse. Vodafone has cut 11% of its Italian workforce in the last two fiscal years  about 700 jobs. 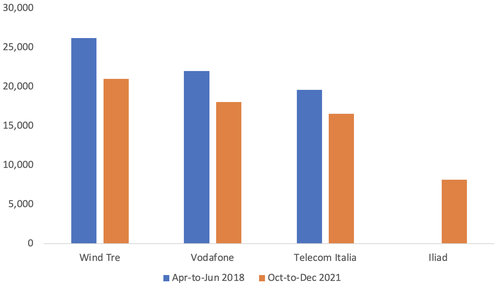 Iliad, by contrast, remains on a roll. Majority owned by French billionaire Xavier Niel, it picked up another 345,000 mobile customers in Italy for its most recent quarter. Sales were up 23% for the first half of 2021, to 383 million ($438 million). Unfortunately, it is incurring substantial costs associated with the rollout of its own mobile network. By June last year, it had equipped just 8,900 sites and turned on about 7,800 of them  not much considering a joint venture between Telecom Italia and Vodafone maintains about 22,000 towers. Lacking nationwide coverage, Iliad rents capacity from Wind Tre in areas it does not currently reach.

The whole Italian venture, then, is still reporting losses, although these did narrow to 139 million ($159 million) for the first half of 2021, from 214 million ($245 million) a year earlier. Buying Vodafone, though, would give Iliad an instant nationwide network and allow it to exit the roaming deal with Wind Tre. Like Vodafone, it has begun offering fixed broadband services to Italian consumers and would also be able to realize cost-saving and marketing benefits if those units were combined.

But a deal would be as hard to pull off as the conquest of Troy, a feat that took the Greeks ten years in Homer's epic poem. Iliad looks ill-equipped financially for a takeover, for one thing. Its net debts had ballooned to 7.4 billion ($8.5 billion) last June, from 3.7 billion ($4.2 billion) a year earlier, and its leverage ratio (debt to annual earnings) was about 2.75. That puts Iliad a par with Europe's indebted incumbents and looks awkward during a time of rising interest rates.

Of course, a full acquisition funded through cash would not be the only option for the merging companies. A more substantial hurdle could be thrown up by competition authorities. For years, they have resisted any deal that would reduce the number of mobile networks from four to three. The gates to Italian mobile were opened for Iliad precisely to avoid this reduction when Three Italia agreed to merge with Wind Telecomunicazioni  the deal that produced Wind Tre.

Read senses a post-COVID-19 change of heart about merger activity among Europe's politicians, he told analysts last week. But investors have heard this sort of optimistic chatter before, and regulators have plenty of reasons to worry about an Iliad tie-up with Vodafone. The overriding one is the impact it might have on struggling Italian consumers as prices creep up  a natural consequence of merger activity.

In the wake of 5G spectrum awards and network-sharing moves, it would leave the Italian market with a very lopsided appearance unless stringent conditions were attached to the deal. The merged company, for instance, would hold two thirds of the 700MHz licenses and a half of the concessions for the 3.7GHz band. A tie-up would also, effectively, leave Italy with only two mobile networks in parts of the country  the infrastructure that Telecom Italia, Vodafone and Iliad share plus the one built by Wind Tre.

Italy is not the only European country where merger talk is in the air. In Spain, a similarly uber-competitive market, there are reports that Orange is considering a merger with Masmovil. In the UK, Vodafone is said to have asked for Three's hand in marriage. The regulatory go-ahead for any one of them could set a welcome precedent.