Peaceful, placard-waving protests about Internet freedom seem almost quaint in late 2020. As the US is riven by coronavirus and racial strife, it is hard to imagine the net neutrality issue would top anyone's agenda in voting for the next president.

Yet one consequence of a likely win for Democratic nominee Joe Biden could be net neutralitys resurrection by the Federal Communications Commission (FCC), the US telecom regulator. Ajit Pai, the FCC chairman appointed by Donald Trump, tore up the net neutrality rulebook written by his Democratic predecessor, Tom Wheeler. Pai's likely Democratic successor will probably glue it back together. 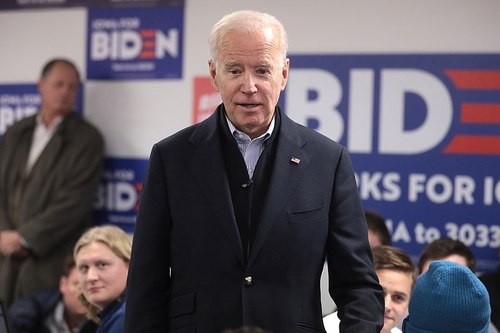 What will America's likely next president do on net neutrality?

It would be a wasted effort if he or she does. The experience of life without net neutrality legislation has shown what a red herring it always was. In the days of orderly protests, net neutralists claimed the very survival of a free and fair Internet was at risk. Rules were needed, they said, to protect the web from a small pack of abusive keyholders, the telecom networks that are its gateway. But in the two-and-a-half years since the regime was toppled, nothing much has changed.

What does it all even mean?

One problem with legislating is the haziness of the concept. The basic principle seems to be that network operators should not be allowed to favor an Internet service over another of the same nature. Propelling a partner's video stream while bungee-roping a competitor's offer would be a flagrant violation. A big concern is that deep-pocketed Internet giants might pay operators for such preferential treatment. Startups would have no chance, say fans of regulation.

Not all examples of alleged discrimination are so clear cut, however. In a practice called "zero rating," operators in some countries have allowed customers to use certain Internet apps without depleting their monthly data allowances. Is this a breach of net neutrality? The practice has been fairly widespread in Europe, and yet the European Union's top court decided it breaks the rules in a September decision against Telenor Hungary.

Network slicing, a feature that operators hope to offer with future 5G services, is another complication. It would, in theory, let operators provide different service guarantees over the same infrastructure. That sounds like anything but net neutrality. Unfortunately, for bureaucrats, it is one of 5G's only selling points. In a classic fudge, no doubt after some vigorous lobbying by Europe's telecom industry, the EU has ruled that network slicing is acceptable because it covers "specialized services" that do not interfere with basic Internet access. Try explaining that in the future to a savvy gamer on basic 5G, conscious that organizations have paid generously for the no-lag service he craves.

While legislators fudge, and lawyers grow richer, no one in Europe's mainstream seriously believes its gatekeepers have made the Internet more discriminatory and less diverse. A big test came this year, when a pandemic lockdown produced a deluge of Internet traffic. Congestion would have provided the perfect incentive for throttling some applications. Yet guess what? The story about all-powerful telcos strangling the Internet was never written.

The ultimate safeguard is probably the region's competitive broadband market. As in any scenario, market abuse is much likelier when there is a dominant service provider, the situation that still prevails across much of the US. That so many American households face such a limited broadband choice is the real failure of that market and its regulators. But instead of fixing this, successive administrations vanquish or restore a net neutrality regime whose only significant achievement is to keep some law firms busy.

Under Wheeler, the FCC moved to regulate operators under arcane Title I and Title II rules. A Title I designation marks an operator as an "information service," which is harder for the FCC to corral. Wheeler's decision to reclassify telcos under Title II made them "common carrier services," subject to net neutrality restrictions. Pai switched them back to Title I, although some states have resisted. An FCC boss under the Democrats  likely to be Mignon Clyburn, a former commissioner, or Jessica Rosenworcel, an existing one  is expected to revert to Title II.

Unlike other federal government policies, this flipflopping has made zero difference to the US telecom sector or wider Internet. Between 2014 and 2015, a $1 billion slump in capital expenditure, which operators blamed on the Title II shift, could have had any number of causes, and was smaller than other drops since 1996. On the other side, there have been no more instances of telco abuse than there were before net neutrality was enshrined in legislation.

Indeed, the US managed perfectly well for years without additional rules. In the first decade of the century, the Internet was already a thing, but networks were much slower and struggled to cope with some applications. Since then, sensible operators have also given up trying to compete against over-the-top players in the applications market. When operators were previously accused of throttling Internet telephony providers, cases were settled under existing competition laws.

Despite all this, the Internet has grown less diverse. However much they try to wriggle free, netizens are in the jaws of FAANG (Facebook, Amazon, Apple, Netflix and Google) from the moment they are woken by the smartphone alarm until the hour they switch off the smart TV. Collectively, those firms are worth nearly $6 trillion and their value has more than trebled in the last five years. Combined, the market capitalization of AT&T, T-Mobile and Verizon is just a tenth of that amount, and the valuation gap is widening.

Market capitalization of major tech and telecom firms ($B) 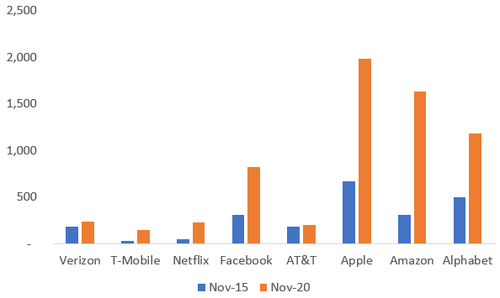 Net neutrality, or the lack of it, has nothing to do with this distortion. Its causes include non-technological network effects and a growing dependence on Internet services for work and recreation. That means it will become even more pronounced during a pandemic that has forced people online. But regulators that are constantly playing catch-up are partly to blame, too. Blocking Facebook's acquisitions of Instagram and WhatsApp would have been advisable, it turns out, if competition and diversity are government priorities.

No companies have ever been allowed to be as economically dominant as FAANG. Finding an answer that does not provoke charges of government heavy-handedness should be a part of Biden's manifesto. Net neutrality is just an expensive distraction. But rather like the White House's current occupant, it may simply refuse to disappear.