Despite the recent introduction of speedy, fixed wireless services aimed at disrupting the wired, in-home broadband market, there were "no signs of wireless substitution (either fixed or mobile)," in Q4 2018, MoffettNathanson's Craig Moffett found in his latest analysis of the US broadband sector.

Verizon's initial move into four markets with "5G Home," an in-home fixed wireless broadband service delivered on millimeter wave spectrum, has done nothing yet to dent cable's growth. The launch "was far smaller than expected  and it was far too small to have any impact whatsoever on market share in 2018," Moffett noted.

Still, Moffett said similar concerns about the threat will linger for MSOs and other wireline ISPs in 2019, "albeit with perhaps a bit more skepticism now" even as Verizon prepares for a more "meaningful expansion" of 5G Home in the latter part of the year. 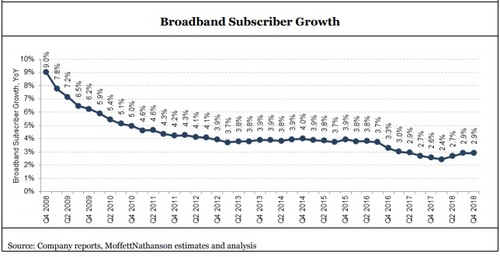 Moffett further observed that AT&T's expanding fiber-to-the-premises footprint hasn't swung market share back to the telco (it lost subs in 2018 even as that footprint expanded by 4 million during the year), and the decline of legacy DSL has likewise not starved US cable of broadband growth.

Moffett again stressed that contributions from new household formation, rather than straight up sub adds and market share sways, is the key metric to follow with respect to broadband penetration, which stands at about 80% of occupied households in the US. He said broadband growth would have slowed considerably if not for the strength in new household formation, which accounted for about 44% of the industry's 2.7 million net adds in 2018, according to his estimates.

He said new household formation growth in Q4 (+1.3%) "continued at levels well above what we have seen in recent years"

"The stronger growth in broadband is not somehow tarnished by the fact that it owes to a macro driver like growth in occupied dwelling units. But it is important to understand the source of the industrys growth," Moffett said.