AT&T Fiber's subscriber base is growing rapidly, but AT&T appears to be benefiting largely from speed upgrades from its existing high-speed Internet customers rather than by stealing share away from cable rivals, according to a new analysis of the US broadband market.

When it announced Q1 results a few weeks ago, AT&T disclosed that AT&T Fiber -- the expanding FTTP portion of its footprint capable of delivering speeds up to 1 Gbit/s -- gained about 1.1 million subscribers over the past year, bringing the total AT&T Fiber sub base to about 3.1 million.

While that translates to an astounding 57% annual growth rate, that has begged a bigger question: Where are those AT&T Fiber customers coming from?

"The short answer appears to be... from AT&T itself," wrote Craig Moffett, analyst with MoffettNathanson, surmising that the bulk of new AT&T Fiber subs are coming from the company's own broadband subscriber base, usually in the form of upgrades or migrations of existing U-verse customers.

To amplify that point, he said AT&T's broader "IP Broadband" category -- which includes AT&T Fiber and U-verse/fiber-to-the-neighborhood customers -- has posted comparatively modest subscriber gains over the past year. 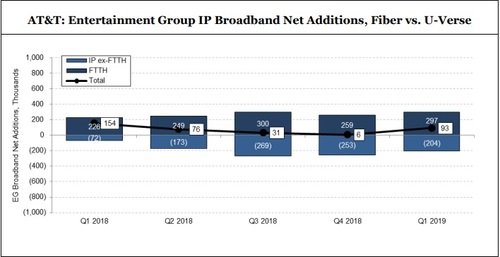 "Therefore, unless AT&Ts U-verse broadband customers are suddenly fleeing for other providers in droves (unlikely), one obvious possibility is that many, or even most, of AT&T's fiber gains are simply migrations of their existing customer base from one product to another," Moffett explained, estimating that about 81% of AT&T Fiber net adds over Q1 2018 to Q1 2019 were migrations from U-verse.

Moffett said that migration story isn't necessarily a surprising one. While the initial U-verse deployments in the early 2000s targeted some of the densest parts of the telco's footprint, AT&T has predictably targeted FTTP deployments in many of the same dense areas, he added.

Also of note: AT&T Fiber's base tier is $60 per month for a symmetrical 80 Mbit/s to 100 Mbit/s, the same as the U-verse standalone broadband product. "Even if a customer doesnt really need faster upload speeds, if AT&T offers to upgrade a customer for no added cost why wouldn't they switch?" Moffett asks.

And though AT&T Fiber subscribers appear to be largely coming way of upgrades or migrations of existing AT&T broadband subs, Moffett said that doesn't mean that AT&T Fiber won't have a bigger impact on competitors (like cable operators) eventually. "It's just that it's not having much impact yet," he wrote, adding that AT&T Fiber's expansion, expected to pass 14 million residential and small business locations by June 2019, remains a threat to cable that's "worth watching."

US cable pushes its broadband lead in Q1
But, for now, cable operators are still dominating the US broadband market.

According to Moffett's report, US MSOs added 1.04 million broadband subs in Q1, up from 962,000 in the year-ago quarter. US telcos added just 23,000 broadband subs in Q1 fueled by ongoing depletion of legacy DSL subs, but improved from a year-ago loss of 44,000 customers. The US satellite broadband sector, still a small player, added 15,000 subs in the quarter.

Average revenue per user (ARPU) growth rates have also climbed along with an acceleration of subscribers. Among some of the top US ISPs covered by Moffett, Cable One, an operator that is focusing on broadband and getting help from its usage-based data policies, leads with ARPU of $71.40, followed by Altice USA ($62.50), Comcast ($60.37), Charter Communications ($56.30) and AT&T ($50.10).