Unlike Donald Trump, Twitter boss Jack Dorsey has never contested and won a US presidential election. Mark Zuckerberg, the boyish-looking head of Facebook, and Jeff Bezos, the billionaire behind Amazon, are also not democratically accountable. Yet the three Internet moguls wield extraordinary, government-like influence over people's lives and economic activity. Their recent antics should trouble any telecom operators that are placing trust in the public cloud.

After the storming of the US Capitol on January 6, Twitter and Facebook moved swiftly to ban Trump as a rabble rouser who had whipped up violence. The decisions immediately silenced a political leader famous for his regular outbursts on Twitter. Days later, Amazon went a step further when it disconnected Parler, a Twitter equivalent popular with Trump supporters, from its cloud-computing service. In the age of social media as a preferred tool of communication, millions of users were instantly gagged. 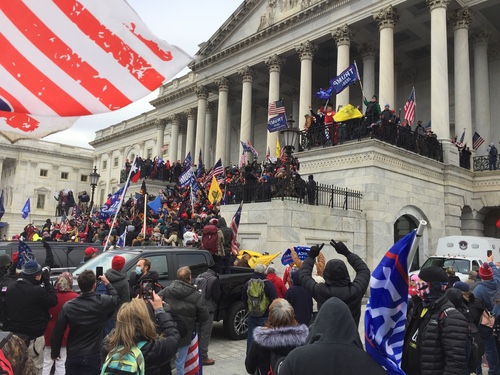 The US Capitol storming this month brought an end to Donald Trump's social media activities.

The moves have been welcomed by numerous opponents of Trump. To many, the man due to vacate the White House on January 20 is a loathsome bigot, peddler of misinformation and damnable threat to US democracy. Nor will there be much sympathy for the racists on Parler who suddenly have no Internet voice. Amazon republished some of the worst obscenities on Parler  asterisking letters in offensive words  to justify its decision.

But the bans set a worrying precedent. They mean a few unelected billionaires who run a handful of private-sector companies have become the arbiters of free speech. Using that power, they have been able to mute a democratically chosen leader  however unpopular he might currently be  and take down a site used by millions of his followers. Such actions are normally associated with dictatorships in the making.

Bring in the watchdogs

None of this would be such a concern were the Internet companies not so big. Twitter today boasts about 330 million users, roughly the combined populations of Germany, France, Italy, Spain, Poland, Romania and the Netherlands (the seven most populous countries in the European Union). Facebook is even larger, boasting around 2.7 billion monthly active users. Decisions taken by its executive committee affect the equivalent of one-third of the world's population. Zuckerberg himself has described Facebook as a modern-day town square, likening it to a public venue rather than a publication with editorial policies. That implies there should be respect for public freedoms.

The Internet firms are colossi in economic terms, as well. In the fourth quarter of 2020, eight of the world's most valuable companies belonged to the technology sector. Amazon, in third place, today has a market capitalization of about $1.6 trillion. Fifth-place Facebook is worth about $716 billion. Amazon Web Services, the cloud-computing part of the Bezos empire, controls about one-third of the market. For any company thrown off its servers, there are few viable alternatives.

No sensible democracy would allow companies of this size to operate without strict regulatory oversight. Just as banking-sector rules introduced in the wake of the 2008 financial crisis are designed to protect society from similar abuses in future, so the Internet giants need to be monitored and restrained.

Existing US legislation is disappointingly inadequate. It dates back a quarter of a century, to the 1996 Telecommunications Act, when Amazon was just two years old and neither Facebook nor Twitter existed. No one at that time could have possibly envisaged the ascendancy of Internet companies in the twenty-first century. What legislators could foresee was the emergence of websites that allowed users to comment and exchange opinions. The now-infamous Section 230 was their attempt to regulate what they archaically called an "interactive computer service."

Section 230 means these services cannot be held responsible for content uploaded by users. Under this rule, Twitter could not be sued for Trump's offensive tweets in the way a newspaper could face prosecution for publishing a reader's libellous letter. But Section 230 also gives websites the right to act as publishers and censor content they do not like. It is a get-out-of-jail-free card, allowing Internet firms to pose as either platforms or publishers for total impunity. Amazon has invoked this outdated and flawed piece of legislation in defending its Parler ban.

A repeal of Section 230 is now long overdue. It should do as Zuckerberg has suggested and treat large established Internet firms as platforms for public use rather than gatekeeping publishers. This would continue to indemnify the Internet companies against legal action over third-party content, but it would also prevent a Twitter or Facebook from removing content it found objectionable. The only exceptions would be for content that breaks government laws in areas such as inciting violence or screening acts of terrorism and abuse.

This opens up a complex debate about what qualifies as inciting violence. No doubt, some lawyers would be able to argue convincingly that Trump did not actively encourage violence when he urged his followers to march on the Capitol, and therefore should not be held liable for what happened. Others would squarely blame the violence on Trump's demagoguery and refusal to accept the outcome of the recent US election. But this debate should not give Twitter and Facebook carte blanche to ban someone outright.

Nor should Amazon be allowed to justify its destruction of Parler on similar grounds. In the aftermath, it published a selection of the most offensive Parler content it could find, most, if not all, of which seemed to encourage violence. But there can be little doubt that similarly offensive comments regularly appear on Twitter before they are taken down by moderators. Ayatollah Ali Khamenei, Iran's supreme leader, is allowed a Twitter account despite his cries of "death to America." Applying Amazon's rationale would mean banning Twitter.

Besides invoking Section 230, Amazon insists Parler was in breach of its terms of contract. That in itself is an argument for regulatory oversight. After 2008, regulators did not allow banks to set their own minimum capital requirements. By the same token, Internet giants should not be the sole authors of the rules for participation in the new town square.

Amazon's supporters have pointed out that Parler and its ilk would not even exist without Amazon as a platform. Thanks only to its cloud-computing investments have small, asset-lite companies had the opportunity to make a handsome profit. If those companies cannot respect its rules, they have no right to complain.

But this argument actually reinforces the case for more regulatory oversight. Amazon has become too foundational to the global economy to be given free rein. It has already driven a bulldozer through the retail sector and is now demolishing and rebuilding others. Precisely because it is a platform that supports so many businesses, government intervention is needed. As Bezos proudly surveys his empire and its paucity of challengers, he should not be dictating the rules.

Parler's fate should make telecom operators think carefully about the growing might of the Internet firms. To cut operational costs, some well-known operators, including AT&T and Deutsche Telekom, are moving IT workloads into the public cloud. Most have some kind of content platform that allows customers to provide feedback and express views. Parler's experience shows there could be consequences for operators whose customers have the wrong opinions.

Of course, this is all highly unlikely. AT&T and Deutsche Telekom are much larger customers of Microsoft Azure than Parler ever was of Amazon. They are also likely to do a better job than Parler did of policing content and weeding out messages that incite violence. Nevertheless, it would have been refreshing to hear at least one of the major telcos speak out. Most are probably wary of upsetting Amazon and many will have little sympathy for Trump, especially after the storming of the Capitol.

Instead, it was left to the leader of Europe's biggest democracy and a high-profile Russian dissident to voice criticism. Angela Merkel, Germany's chancellor, was reported to have said that private companies should not be responsible for rules on free speech. Alexei Navalny, an opponent of Russian president Vladimir Putin, described the silencing of Trump as an "unacceptable act of censorship."

A repeal of Section 230 could bring some welcome clarity for the Internet firms. Right now, Facebook is caught between crusading, left-wing journalists like Carole Cadwalladr, who seems to think Zuckerberg's company is too close to the far right, and libertarians outraged by its decision to ban Trump. Dorsey has reportedly said that banning Trump sets a "dangerous precedent," suggesting he felt under pressure to act. But financial analysts are unimpressed. According to Wells Fargo, Trump's absence will hurt traffic and lower Twitter's valuation. Whatever the rules on free speech, they should not be down to big tech.

Like what we have to say? Click here to sign up to our daily newsletter
Related Stories
COMMENTS
Newest First | Oldest First | Threaded View
Add Comment
Be the first to post a comment regarding this story.
EDUCATIONAL RESOURCES
sponsor supplied content
vRAN Value Proposition and Cost Modeling
Educational Resources Archive
More Blogs from Morris Lore
MWC 2021 is a go, but can it attract 50K visitors?