Despite some "signs of stress," AT&T's mobile and wireline networks have handled the load so far as data usage continues to rise during the COVID-19 pandemic, AT&T CEO Randall Stephenson said Sunday on CNN, the news network now owned by AT&T's WarnerMedia.

In an interview with CNN's Brian Stelter on "Reliable Sources," the exec noted that traffic volume on AT&T's mobile network is up 40% while Wi-Fi calling volume has surged about 100%. 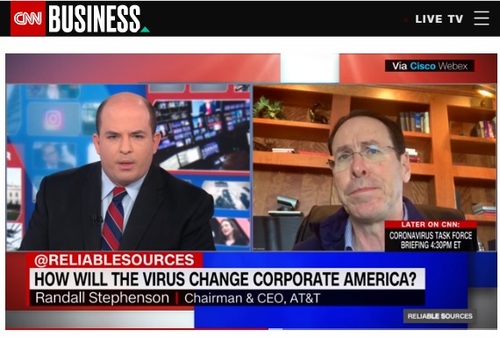 "The network is performing quite well, to be quite honest with you," Stephenson said, adding that traffic patterns are changing as millions stay at home while others require more mobile capacity as they are on the go. "It's doing very well  The infrastructure is allowing the communication to continue."

As for those pockets of stress, AT&T has been augmenting the network where needed, he added.

Stephenson also referenced the elevated role of FirstNet, AT&T's government-funded, dedicated national 4G LTE network for public-safety workers that was about 75% complete as of late February.

"In a time like this of national crisis, this network is being tested for its first time, and it's actually performing quite well," Stephenson said. "We're doing everything we can. All of our resources are being marshalled toward insuring that our first responders are able to communicate and do their jobs effectively.

Meanwhile, AT&T is telling employees to work from home if they are able to perform the job at home. Stephenson estimated that about 90,000 people in AT&T's workforce are currently working from home. There are another 20,000 "who are affected by this virus for any variety of reasons" that can't do their jobs from home that are on leave with pay, the exec added.

Stephenson was also asked to comment on the US government's proposed $2 trillion stimulus package. He called it "big and bold" and something that will be required "to keep the economy at some level of stability." But he added that it's still unknown if the package would be targeted to all the specific places that are in most need of it.

"All of corporate America [will] need to step up to help our employees and help our customers to do everything we can to try to endure this," he said. "This is like World War II and everybody needs to step up do their part in terms of how we help the general population."

Network traffic still on the rise
Stephenson's note about network utilization jibes with what everyone else is seeing  it's way up.

In a research note issued today, Raymond James acknowledged that all service providers are seeing spikes in traffic, with a particular rise in video conferencing – Cisco, for example, has seen WebEx volume double in the last ten days.

"Operators have issued statements regarding their networks, and so far, the US seems more resilient than European networks," the analysts said. On that note, a handful of streaming services, including Netflix, Amazon, YouTube and Disney+, have already agreed to reduce their bit-rates temporarily in Europe to help networks handle the load.

As for vendors in his scope of coverage, Ciena, CommScope, Ericsson, Juniper and Nokia are among those that would see a benefit from the need for network capacity add-ons.

"We are not predicting a sudden surge in operator spending; rather, we see the crisis as a wake-up call and incremental tailwind for network investment," the analysts added.