As Amazon shifts, like other Silicon Valley giants, into the antitrust gunsights of US members of Congress and prosecutors, it may have been forgiven for thinking it could have a short respite from competition authorities in Brussels.

It would have been badly wrong.

The European Union, after an investigation begun in July 2019, says Amazon uses the data it collects from independent companies which market on its platform then to compete against those very firms. 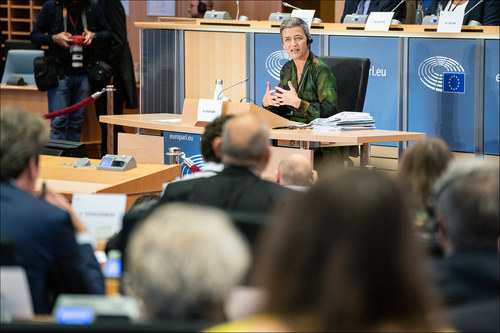 Amazon will face being fined up to 10% of its global turnover if a final decision, probably to come next year, finds it guilty of breaching EU antitrust rules.

It will, however, have the option of ducking quite so big a fine by offering concessions to settle.

Fine. Don't be that way

The EU's investigation finds Amazon uses "very large quantities of non-public seller data" from its marketplace division, which deals with these retailers, so that it can hone its own, competing retail activities.

And this happens at pretty great scale and with some sophistication, too.

Data flows "directly into the automated systems" which "aggregate these data and use them to calibrate Amazon's retail offers and strategic business decisions to the detriment of the other marketplace sellers," says the European Commission.

So if something's selling especially well from a small independent vendor, Amazon will just pop in its own product, and undercut it.

The Seattle-based tech giant can "focus its offers in the best-selling products across product categories" and "adjust its offers in view of non-public data of competing sellers," the Commission says.

"We reached the preliminary conclusion that Amazon illegally has abused its dominant position as a marketplace service provider" in Germany and France, says Margrethe Vestager, who is both Competition Commissioner and the European Commission's executive vice-president.

It may also have used sensitive data "to compete against smaller retailers," adds the Danish commissioner, whom the Economist has called the rich world's most powerful trustbuster.

Vestager, it seems, can also do things at scale.

Her investigation looks across 80 million transactions, and reviews 100 million products on the Amazon platform.

Companies that hold a dominant position in a market can't abuse that position, says Article 102 of the Treaty on the Functioning of the European Union.

This Treaty is the current version of the original 1957 Treaty of Rome, which was heftily amended in 2007 by the Treaty of Lisbon.

The Commission's latest step is to send Amazon a Statement of Objections.

This lets Jeff Bezos' company reply in writing, and if they want, request an oral hearing to present their side of the case.

At the same time, the Commission is opening a second formal antitrust investigation into smaller vendors' access to Amazon's logistics and delivery services.

This investigation will cover the European Economic Area, but not Italy, since the Italian Competition Authority, the Autorità garante della concorrenza e del mercato, started its own overlapping investigation last year into the Italian market.

The European Commision fined Google 1.49 billion ($1.75 billion) in March 2019 for breaking EU antitrust rules, its third fine since June 2017. The most recent fine was for falling seriously afoul of EU competition rules in how it used its search advertising brokering to cement its dominant market position.

That is, Amazon is following Google's lead in Europe, and not in a good way, as Bloomberg opinion writer Alex Webb puts it.

If the EU has shown Amazon a stick, it's also held out an own-brand carrot.

"I recognise that in other cases Amazon has been very forthcoming to solve the issues at stake," says Vestager.

"Some of the national competition authorities have had the same experiences of finding issues where they had preliminary conclusions where Amazon has engaged in finding solutions," she adds.

So far, however, Amazon has not taken the carrot.

Amazon will "continue to make every effort to ensure" that the European Commission has "an accurate understanding of the facts, says Amazon's spokesman, Conor Sweeney.