Synchronoss swimming in losses but sees hope in cloud

Few companies have specialized in value destruction quite as spectacularly as Synchronoss. Worth $48.48 in late 2016, its share price took a slow-motion high dive amid accounting problems, the mysterious and sudden departure of prominent executives (including CEO Glenn Lurie) and the sluggish development of its business, ending up at $1.13 on May 10, the day it reported its latest quarterly results. Losses over the last five years come to more than $576 million. Annual revenues have fallen 30%.

It is splashing around in a crowded pool with no shortage of competitors, as it admits in its own financial reports. Its personal cloud services, which allow device users to store and access content under a telco's branded offer, are up against the likes of Amazon, Apple, Google and Microsoft. The digital unit that develops telco software faces Accenture, Amdocs, Salesforce, TEOCO and others.

Then there is RCS, the telecom world's feeble response to Internet messaging and the WhatsApp phenomenon. While few analysts have had anything very positive to say about it, Synchronoss has been trying to keep RCS afloat as part of its messaging portfolio. Yet its messaging revenues have been sinking  from more than $92 million in 2019 to about $60 million in 2021. No doubt, it was a victim of last year's decision by AT&T, Verizon and T-Mobile to let their RCS-flavored Cross Carrier Messaging Initiative drown. Synchronoss was supposed to be handling the logistics.

Executives are carrying out emergency CPR. Synchronoss expects to narrow its focus when, in the next few days, it completes the sale of various digital assets to iOmetrix, another telecom software vendor. This transaction, however, will raise only about $14 million, and the Synchronoss balance sheet now includes about $112 million in long-term debt (minus cash and cash equivalents) after bonds were issued last year.

For all the years of bleating about RCS, the message on messaging suggests this unit, too, is no longer the top priority. "While we're seeing opportunities to expand the reach of our email and advanced messaging solutions, our investments in messaging remain focused on supporting our existing and potential new customers as well as driving improved profitability and cash flow from this business," said CEO Jeff Miller on the results call.

The good news was a relatively buoyant performance by the cloud unit  enough to lift the Synchronoss share price by 8% in after-hours trading, to $1.22. While digital revenues fell 6% year-on-year, and messaging sales by 10%, cloud grew 7% to account for 63% of the $65.9 million in total revenues. The goal, said CFO Taylor Greenwald, is to make cloud "the primary focus and driver of the company."

Good luck with that against Google et al. The big attraction of Synchronoss over the various tech giants offering personal cloud services is the "operator-grade white label solution" it can provide. But why consumers should prize this more than a big-tech-grade, Apple-branded service is unclear. Perhaps concern about Big Tech dominance will steer them toward telco offers, but the recent financial performance of these respective companies suggests not. 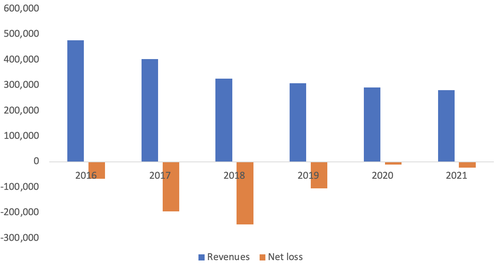 Losses narrowed substantially in the recent quarter, dropping from $12.5 million a year earlier to just $3 million. This would also have been welcomed by investors, but the reduction owed everything to lower depreciation charges and a 9% cut to the research and development budget, which came to about $15.8 million. Jobs have gone at the messaging business this year, revealed Greenwald on the results call. After previous layoffs, overall headcount at Synchronoss fell from 1,659 in 2019 to 1,526 last December.

Anyone expecting Synchronoss to emerge from the depths this year looking shiny and resplendent should probably think again. Factoring in declines at the messaging and digital units, the midpoint guidance is for revenues of $267.5 million, down 5% on the figure for 2021 and nearly $210 million less than what Synchronoss made in 2016. The company name alludes to things happening smoothly in perfect lockstep, but the performance has been a shambles.