Splitting up with a public cloud provider threatens to be as complicated, expensive and time-consuming as a celebrity divorce, depending on the equivalent of the prenuptial agreement. Snap, the company behind the Snapchat messaging app, almost sounds resigned to being in permanent relationships with AWS and Google Cloud, whatever happens. Moving services to another provider "would be difficult to implement and would cause us to incur significant time and expense," it has noted for years in filings with the US Securities and Exchange Commission.

It should worry telecom operators as they snuggle up to the public cloud. Many have been in a flap about vendor "lock-in," the phenomenon of being stuck unhappily in a partnership like an abused spouse. Yet the same companies that gush about open RAN  an industry attempt to ease divorce proceedings and promote polygamy in the radio access network  risk the opposite in the public cloud.

Take AT&T, for instance. The US telco is not simply running its 5G core network on Microsoft Azure but has sold Microsoft the assets, like a wife handing over worldly possessions to her new husband. Microsoft is now basing its entire pitch to other telcos on its AT&T acquisition. How is this not a serious loss of control and independence for AT&T? 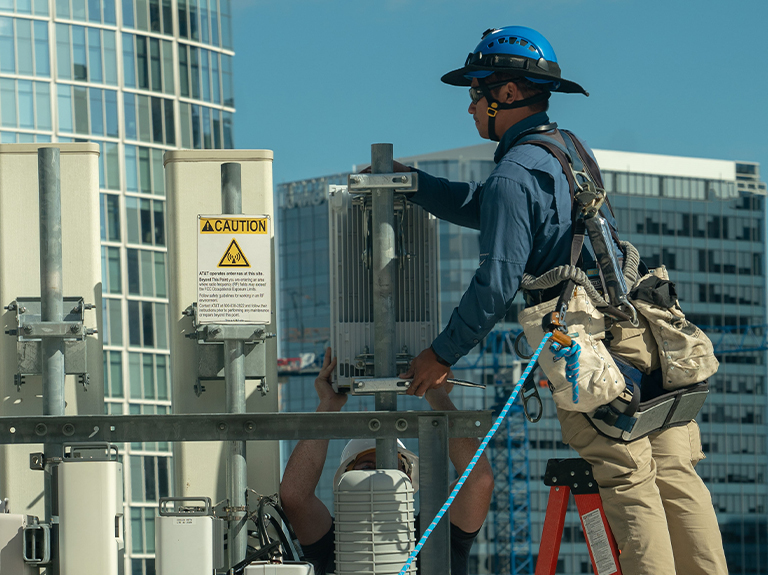 Stuff you can't put in the public cloud.
(Source: AT&T)

Then there is Dish Network, a lover of the open RAN that has an all-encompassing public cloud deal with AWS. Dish has not sold assets to AWS (as far as we know), but it is going much further than AT&T operationally. About the only things it is holding back from AWS are some RAN functions currently uncomfortable with a public cloud home. These will live on a VMware platform instead.

Shifting the RAN to the public cloud sounds especially perilous, and even Microsoft thinks some network functions will never go there, partly for performance reasons. Yet one of the biggest RAN vendors has been highlighting recent deals with AWS, Google Cloud and Microsoft Azure. "As a RAN supplier, we will provide our mobile operator and enterprise customers with the flexibility to select their own server platforms and private clouds or use public service clouds," said Tommi Uitto, the head of Nokia's mobile business, in a blog this week.

What his blog does not mention is the prison-break difficulty of freeing a RAN from a public cloud. But this was quickly acknowledged by the Finnish vendor in response to questions. "RAN is not cloud-agnostic due to the nature of real-time processing," said Jane Rygaard, Nokia's head of wireless networks, via email. "So, it wouldn't be straightforward to move from one [cloud] to another." In future, a commoner approach to management interfaces and automation layers might ease transition, she did add. Today, it seems, that doesn't exist.

In other words, open RAN plus public cloud seems to equal closed RAN after all. Sure, an operator might be able to buy its baseband software separately from its radios, swapping either if needed without too much fuss (although this remains to be seen). But if it could not extricate its RAN from a public cloud, it would still be locked in.

Lock-in is not just an issue for the RAN, though. In fact, the more cloud-native any software, the harder it is to be cloud-agnostic, said one developer on condition of anonymity. Agnosticism is probably easier if a company uses only generic resources with containers and runs its own Kubernetes cluster (Kubernetes being the open-source industry standard for container management), he told Light Reading. Anyone taking advantage of a hyperscaler's own services  including EKS, Amazon's managed Kubernetes service  would find moving harder. His own company, he said, is trying to find a middle way. But it notably counts AWS as its only public cloud partner today.

The reference to EKS is interesting because Parallel Wireless, a RAN software developer that recently laid off most of its workforce, has begun using it, according to a company update this week. It will, promises Parallel Wireless, allow customers to run their application workloads across different hosting environments, whether on-premises or in the cloud. Shifting those workloads from AWS to Azure may be another matter.

The developer assessment of lock-in risks is endorsed by Jerome Loridan of Orange Business Services, the enterprise unit of French telco incumbent Orange. "Every cloud provider has something it calls the well-architected framework to promote the redesign and reconstruction of apps to run on the cloud," he told Light Reading at an event in Paris this week. "This is where it starts to be complicated to move from one cloud provider to another."

"You may be in a vendor lock-in situation by using some services that are specifically designed by this hyperscaler," added Loridan, who heads the marketing of professional services for Orange's cloud unit, "If you want to move it back to another hyperscaler, you have to find the equivalent service. Sometimes that is not easy because the service is really specific and proprietary."

Despite the warnings, companies are queuing up to sign deals with public cloud providers, and mainly AWS. They include Rakuten, a company building a fourth mobile network in Japan and selling software to operators outside it. Rakuten Symphony, the part doing that, has now made its Symworld "app store" of network applications available on AWS. There was no mention in Rakuten's announcement of similar deals with Google Cloud or Microsoft Azure. Customers wanting to use the public cloud, then, would seem to have a choice of one.