Although the sector is still young, and market share figures are extremely difficult to obtain, a growing number of signals indicate that Amazon Web Services (AWS) is taking an early lead against rivals Google Cloud and Microsoft in the hyperscaler race to capture market share among telecom network operators.

For example, analyst Caroline Chappell at research and consulting firm Analysys Mason said Microsoft Azure and AWS account for over 70% of all partnerships for business-to-business cloud computing services in the telecom industry.

Separately, research and consulting firm Omdia (owned by the same parent company, Informa, as Light Reading) surveyed 49 senior operations and IT decision-makers among telecom operators in July 2022. When questioned about which public cloud they used to run any network functions, the responses were concentrated on two: About 70% indicated AWS, and 57% said Azure. 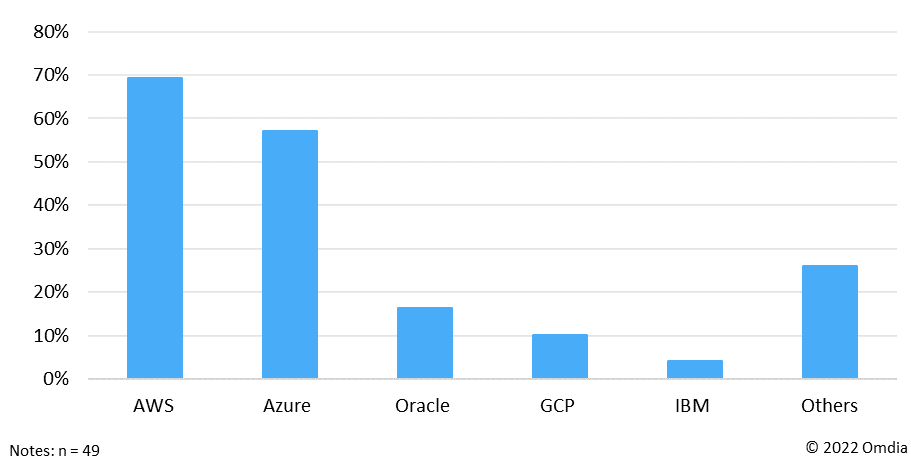 Omdia asked 49 telecom executives to list which public cloud or clouds their company is currently using to run any network functions, and respondents could select all that apply. Azure is Microsoft's cloud and GCP is Google Cloud Platform. Click here for a larger version of this image.
(Source: Omdia)

"If I had to guess: My gut says it's AWS > Azure > Google," wrote Danielle Royston of TelcoDR, in response to questions from Light Reading on the topic. Royston was previously the CEO of telecom software vendor Optiva, but has recently become a major public cloud evangelist for the telecom industry.

"It comes down to regions, chips and software," Royston explained. "AWS continues to have a strong argument in telco because they keep building out regions which helps combat the data residency objection, and I think they will continue to build regions everywhere to support their retail business. They have the cash to continue to invest big capex [capital expenses] and the track record of doing it, which may be the trick to ensure market position. Their Graviton chips save telco real money on power consumption, plus they have a big catalog of software."

However, many analysts who closely track the space also offered caveats and clarifications to these early conclusions.

"While there are a lot of strategic partnerships that have been signed ... it's still early days where cloud workload movement hasn't started," Royston cautioned.

Similarly, Analysys Mason found that Google signed 45% of all IT/network transformation deals in the first half of 2022.

Finally, all analysts noted that AWS, Google and Microsoft are not the only companies offering cloud computing services. For example, Oracle is another major player, while companies like IBM and VMware also offer various cloud services. Further, each cloud vendor offers a slightly different take on the market, making direct comparisons difficult.

Nonetheless, the allure of the cloud appears irresistible to many telecom network operators. In some cases, operators are simply selling cloud services to businesses. For example, according to data from Analysys Mason, 57 telecom operators worldwide have partnerships with public cloud providers to deliver cloud computing services to their business customers, while 67 operators have partnerships with public cloud providers for direct connections to the cloud.

But the cloud is gaining a foothold inside telecom networks themselves. Omdia found that, in a recent survey, 12% of telecom executives believe the public cloud is the optimal place to run network functions.

That doesn't necessarily come as a surprise. After all, AWS, Microsoft (via its Azure cloud) and Google Cloud have all made their intentions plain: They want to bring the telecom industry into the cloud. That effort initially centered on pushing telecom network operators' standard IT functions into the cloud  but is now expanding to include operators' core network functions.

In their pursuit of telecom customers, each hyperscaler has created telecom-specific business units, staffed by a large number of well-known telecom veterans. And they've been sending phalanxes of executives to the telecom industry's biggest trade shows.

Some operators have said they aren't interested, at least regarding their core network functions. "I strongly believe that large telcos should own their own destiny  so, for example, I will never be putting our core network on a hyperscaler," said Verizon Business CEO Sampath Sowmyanarayan during a recent industry event. "There are some red lines we won't cross."

But other operators take a different view. AT&T, for example, has a deep partnership with Microsoft. And Dish Network built much of its 5G network in the AWS cloud.

It's unclear how the market will play out. But it may not be a surprise that AWS appears to have taken the lead in the cloud market for telecom operators. After all, the company is far and away the leader in the wider market for cloud infrastructure services globally, across all industry sectors, according to third quarter 2022 data from Synergy Research Group. The firm reported that AWS commanded 34% of the market, followed by Microsoft at 21% and Google at 11%.