Apple under fire over courting of Chinese chip firm

For all the latest techno-nationalism, the Chinese have never stopped loving Apple, a company as staunchly American as the Ford Model T. Last year, the iPhone maker's sales to China soared 70%, to $68.4 billion, more than two-and-a-half times the rate of growth in other markets. Despite the dizzying array of homemade options, Apple sold more smartphones in China than any other brand in the run-up to Christmas, capturing 22% of the market, according to data from Counterpoint Research.

China's criticality to Apple might explain why the company now run by Tim Cook has been considering YMTC, a Chinese maker of memory chips, as a supplier for the upcoming iPhone 14, as first reported by Light Reading on March 28. Apple already has tried and trusted chip suppliers in the likes of Samsung and Kioxia. As a Chinese state-owned company, and one that has been linked to China's military, YMTC would be a controversial substitute. But losing access to China because it refused a deal with YMTC could be much worse.

It is a possibility, according to Richard Windsor, the founder of research company Radio Free Mobile. In a blog published last week, he notes the "increasing tension" between China and the US and reckons "this creates a pressure point that the Chinese state could use against the USA." What's doubtful, he acknowledges, is China's willingness to upset millions of local consumers and the Chinese iPhone ecosystem, potentially including YMTC. All that, writes Windsor, "could make the Chinese state think twice about making life difficult for Apple." 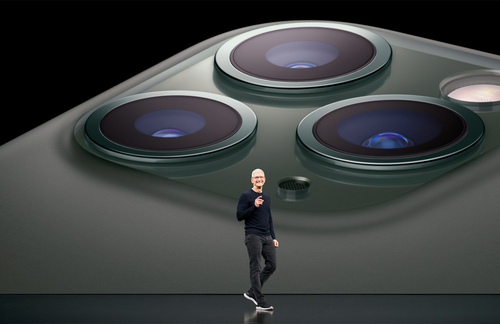 Apple CEO Tim Cook on stage during one of the iPhone maker's glitzy updates.
(Source: Apple)

An alternative theory is connected to the current global shortage of semiconductors and pricing considerations. "It could be Apple trying to put price pressure on their suppliers because there are few suppliers of this kind of memory," said John Strand, the CEO of advisory company Strand Consult. Cook is thought to be fanatical about supply chain management to minimize costs. Kioxia, moreover, has reportedly run into production problems at two of its Japanese plants.

There is skepticism YMTC could beat a global memory juggernaut like Samsung on pricing. But the Chinese company is estimated to have received about $24 billion in subsidies from Chinese government sources, noted a White House report on supply chain vulnerabilities last year. Flush with government funds, YMTC could flood the market with low-cost chips, driving other suppliers out of business, critics have warned. The rise of Huawei, and parallel demise of numerous Western competitors, was blamed on similar factors.

Rubio goes on the attack

Either way, the chance of a deal between Apple and YMTC will have receded following intervention by Marco Rubio, a firebrand US senator. In a letter addressed to Tim Cook, citing Light Reading's original report, Rubio said it was "unacceptable that sales of the next generation iPhones would end up strengthening the Chinese military and put the lives of American service-members at risk as a result."

Apple has been typically quiet on the subject and did not reply to a Light Reading email last week asking for comment. But the addition of YMTC to the Entity List  a trade blacklist maintained by the Bureau of Industry and Security, a part of the US Department of Commerce  would likely prevent Apple from using it. "In a just world, the Biden Administration would have already added YMTC to its trade blacklists, including the US Department of Commerce's Entity List," wrote Rubio in his letter to Cook. "This should occur immediately."

The Entity List already features the names of several Chinese technology firms, the most prominent of which is Huawei. Fujian Jinhua, another Chinese memory chip maker, reportedly had to cease trading in early 2019 when its own blacklisting stopped it from obtaining critical factory equipment from US suppliers. Previously, it had been accused of stealing intellectual property from Micron, a US chipmaker.

Policymakers may have refrained from adding YMTC to the Entity List because doing so would badly hurt the US companies that make equipment for semiconductor factories. Applied Materials, Lam Research and KLA Corporation all saw their sales to China rise a dramatic $4.4 billion last year, to $14.5 billion. In a December 2020 report by SOS International, James Mulvenon, a China expert, identified Applied Materials as YMTC's largest single supplier at the time.

From a "tech wars" perspective, authorities are unlikely to be overly worried about YMTC, according to Windsor. Its memory chips are based on 20-nanometer equipment (essentially referring to the size of the transistors included in the chips), "which is several generations away from the current leading edge," he wrote in his blog. The real concern is over access to advanced 5-nanometer technology, which only Samsung and Taiwan's TSMC are currently able to produce. Being cut off from TSMC by US sanctions is largely why Huawei had such a torrid 2021, when its consumer sales halved compared with the previous year.

There is a possibility Apple strikes an agreement with YMTC  assuming it manages to evade sanctions  but only for iPhones sold to China, according to Strand. An excess of negative publicity about the tie-up could backfire in the US, he reckons, regardless of political affiliations. "For a lot of Americans, it will not work and that goes across the aisle," said Strand. "You don't have to be a hardcore Republican like Rubio."