Trump now forcing global carriers to pick a side

If the US-China trade war were a schoolyard brawl, President Trump would be the instigator warning passive bystanders that "you're either with us or against us."

And his latest move on the topic creates a very visible way to discern which global wireless network operators are "with" him: The US State Department is now keeping a list of international telecom operators that meet its "Clean Networks" guidelines.

"Some of the largest telecom companies around the globe are also becoming 'Clean Telcos,'" writes the State Department on its website. "Orange in France, Jio in India, Telstra in Australia, SK and KT in South Korea, NTT in Japan, and O2 in the United Kingdom are rejecting doing business with tools of the Chinese Communist Party's surveillance state, like Huawei."

The implication, of course, is that any company not on the US government's list is "dirty." 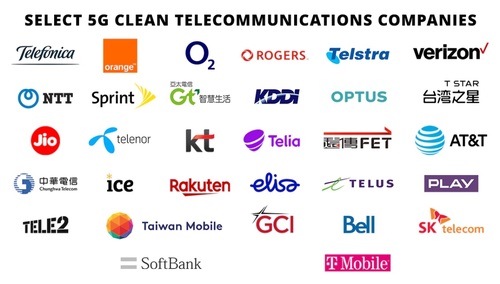 Japan's SoftBank is the latest operator to join Trump's anti-Huawei gang, complete with a public statement replete with diplomatic platitudes.

The US State Department, headed by Trump appointee Mike Pompeo, also offers a five-page, 31-point checklist for operators that want to get Trump's special "Clean Network" sticker. Among the requirements: "Suppliers are more trustworthy if they are financed openly and transparently, use best practices in procurement, investment, and contracting, and have records available for public or regulatory scrutiny as appropriate," states point No. 13.

The State Department said its guidelines were developed by a group of "25 experts from Asian, European, and US companies and research centers" and that they adhere to the previously established Prague Proposal and 5G Toolbox from the European Union.

Other telcos listed as "clean" by the State Department include Telefónica, NTT, Rakuten and Telekom Albania.

"Telefónica is proud to be a 5G Clean Path company. Telefónica Spain and O2 (UK) are fully clean networks, and Telefónica Deutschland (Germany) and Vivo (Brazil) will be in the near future without equipment from any untrusted vendors," explained Telefónica CEO José María Álvarez-Pallete López on the State Department's website.

Incredibly, the State Department also developed some short videos on its 5G website explaining its efforts:

From continents to countries to companies
The Trump administration's push against China and Huawei is well documented, and has been ratcheting up and branching out in recent months. From an international perspective, it has primarily focused on getting other countries  from the UK to Poland, Sweden, Estonia, Romania, Denmark and Latvia  to block Huawei.

The State Department's "Clean Networks" initiative  launched just a few weeks ago  adds a major new dynamic in that it publicly names the vendors and operators that are considered "trusted" by the US government.

Importantly, Trump's efforts appear to be having some effect. Many expect Huawei to lose global market share in the coming years. And PCMag reported that China's own 5G buildout has recently slowed due to the US government's newest restrictions on business with Chinese vendors.

But, according to a new Bloomberg article, the State Department's international campaign against Huawei hasn't been a total success. A number of African countries, led by South African President Cyril Ramaphosa, have rejected its efforts.

"We support a company that is going to take our country, and indeed the world, to better technologies, and that is 5G," Ramaphosa said at an economics summit, according to Bloomberg. "We cannot afford to have our economy to be held back because of this fight."

Bloomberg reported that Huawei so far hasn't lost a single order in Africa, where it has operated for more than two decades.

Huawei, for its part, continues to argue its products do not pose a threat.

"For 32 years, we have demonstrated that our customers can trust us," Paul Scanlan, chief technology officer for the Huawei Carrier Business Group, told Fortune. "It's unfortunate that [with] this geopolitical war that's going around the world, and nationalism in many countries, [people] fail to understand that. We've got a virus at the moment and the only way you fix those things is through collaboration, not through isolation."