Sweeping China bans could mean heavy costs for US firms

The US war on China tech jumped into a higher gear last week with bans on TikTok and WeChat and the unveiling of the "Clean Network" strategy. 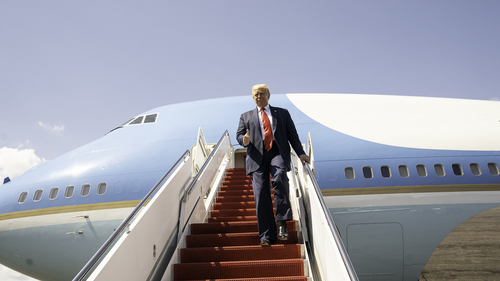 Flight of fancy: President Trump told reporters on board Air Force One about his plans to ban TikTok and other Chinese platforms in the US. (Source: White House)

TikTok, owned by privately held Beijing firm ByteDance, is the wildly successful short-video app that has been downloaded 1.5 billion times.

Twitter, Microsoft and various VCs are engaged in trying to find a US buyer to evade the ban.

WeChat is less well-known in the US, but is the indispensable app for life in China  a combination of Facebook, Twitter, WhatsApp, news, government services, payments and authentication.

It is also used in the US by Chinese-Americans and those doing business in the country.

It is owned by Tencent, which also has a huge games business, including Fortnite and League of Legends. Tencent is a major Hollywood investor (Wonder Woman, A Beautiful Day in the Neighborhood) and, with Alibaba, is one of the two big Chinese cloud companies.

Cleaning house
They are among the prime targets of the Clean Network program, aimed at excluding all Chinese cloud, subsea cable and telecom firms from the US, and "untrusted" apps from app stores.

Trump officials have a point about both ByteDance and Tencent being beholden to Beijing. You don't have to look hard to find censorship by either firm, and both have been caught engaging in dubious privacy practices.

But as Eurasia Group analyst Paul Triolo puts it, these hugely consequential executive orders are "an unprecedented intervention by the US government in the consumer technology sector."

There are plenty of good reasons for foreign governments to find ways to constrain the PRC and its tech sector  the large state subsidies, intellectual property theft, broken WTO commitments and global censorship, just to name a few.

But the vague and sweeping nature of these sanctions, unveiled suddenly three months before election day, appear more aligned to a China-baiting election strategy than a sustained effort to prevent abusive behavior.

Plus the strategy is imposing costs of its own.

Collateral damage
Qualcomm, the world's leading handset chip supplier, is reported to be pushing back at the Huawei sanctions  and most certainly it's not the only one.

It's seeking permission to sell its Snapdragon chips to Huawei, the world's No. 1 handset company. That's a market worth some $8 billion a year  a lot of money to be leaving on the table for Samsung and MediaTek, with no impact on Huawei or China.

US component suppliers have already had to forego billions as result of the export bans on Huawei network equipment.

Up to now, China has made vocal objections to the US prohibitions, but has made few counter-measures. What steps it has taken have been narrowly targeted, such as the exclusion of Nokia from the 5G radio access market.

Right now Beijing is getting plenty of encouragement from local media and social media to strike at Apple, the company with the biggest target on its back. Apple takes around 15% of its income from China and its global production is sourced out of there.

But Apple's biggest threat is from Washington, not Beijing.

The vagueness of the executive orders may mean that Apple and Google will have to exclude WeChat and other "untrusted" China apps from their China app stores.

That could be catastrophic for Apple. According to an analyst quoted by Macrumors blog, global iPhone shipments could suffer by 25%-30%.

The analyst, Ming-Chi Kuo, has already recommended that investors reduce their stock holdings of companies in Apple's supply chain, such as LG Innotek and Genius Electronic Optical.

That's a lot of pain for not much gain.