Dish Network Chairman Charlie Ergen has been adamant that a merger of Dish and DirecTV is a fait accompli. But a proposed infrastructure bill under President Biden might dampen Ergen's enthusiasm and perhaps drive the possibility of any such marriage off the rails, reckons a top industry analyst.

Biden's proposed bill, which includes $100 billion for rural broadband, could effectively deliver a "body blow" to any chance to merge the satellite TV businesses of DirecTV and Dish, MoffettNathanson analyst Craig Moffett surmises in a new report.

The proposed bill could make such a deal easier to pass muster at the US Department of Justice (and possibly at the Federal Trade Commission and the Federal Communications Commission), because it targets rural markets that would have usually represented the biggest impediment to a DirecTV-Dish combo. But that same bill also goes after the same rural markets that also represent "the most critical backstop for the satellite industry," Moffett explained.

A focus on that rural backstop, which includes areas that can't get cable TV or OTT-delivered video services, has helped both DirecTV and Dish to slow down subscriber losses in recent quarters. 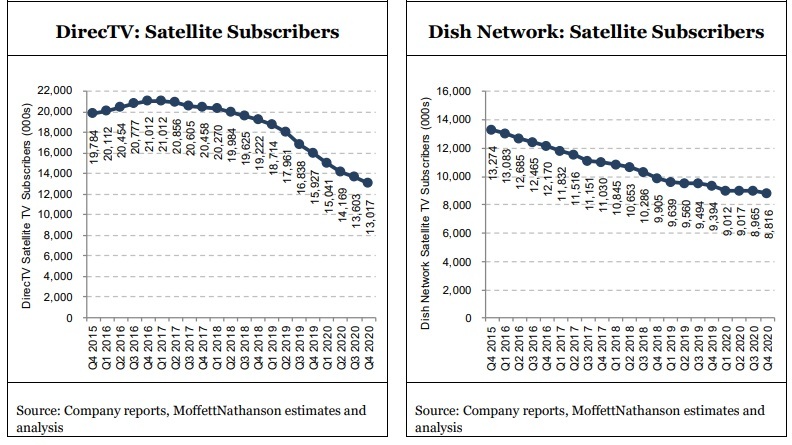 "The Biden infrastructure bill explicitly targets taking the 'rural core' of customers historically served exclusively by satellite providers, to zero," Moffett explained. "If such a thing were to actually happen, it would certainly make it easier to sell a satellite merger in DC  there would no longer be a significant part of the country where it could be argued that a satellite TV merger would take the number of competitors from two to one."

But the bill also stands to "gut the last reliable defensive stronghold for satellite TV," he added. "The risk to satellite from the infrastructure bill is there with or without a merger. But it highlights what is perhaps still the biggest impediment to a merger."

And there are other impediments to consider. Others include the continued acceleration of cord cutting, which has also slowed down gross additions at both providers that, in Moffett's view, reduces the value of a merger, cuts into the synergies of such a deal and makes a merger just that much harder to finance. 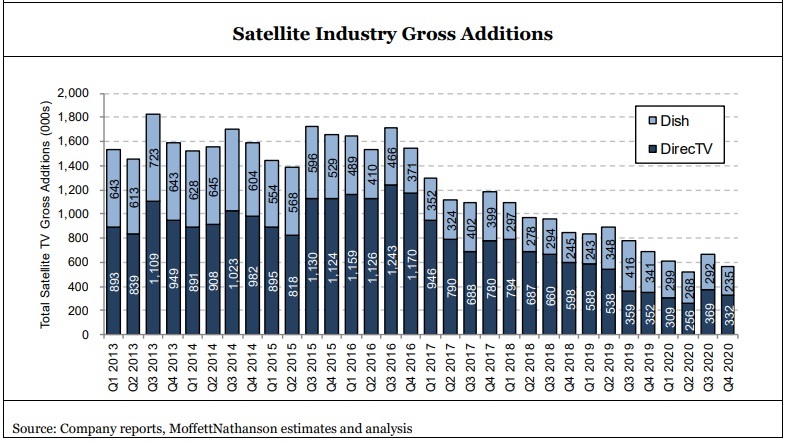 "Unfortunately, the synergies have been getting smaller, and the longer a merger is delayed, the smaller they will get," wrote Moffett, who estimates that a merger could generate about $2.5 million annual in total savings when factoring in elements such as SG&A costs and improved programming and cost of subscriber acquisition costs.

Adding to the complexity is AT&T's recent move to spin-off DirecTV, though the analyst does not necessarily see that as a move to clear the regulatory decks for a merger with Dish, in part because "legal ownership in the eyes of regulators didn't change."

"The change in capitalization doesn't address any of the reasons the DOJ (during the previous administration) reportedly indicated that they would be disinclined to approve a deal," Moffett explained. "The new administration, on the surface, would only seem to make a deal less likely.