Rogers and Shaw merger is off for now

Canadian authorities didn't relish the spectacle of Rogers Communications trying to mate with Shaw Communications. The offspring of that cable coupling, they feared, would have crushed mobile competition and thwarted all their earlier attempts at seeding alternatives to the big three  Rogers, along with Bell Canada and Telus. Inserting itself between the frustrated Rogers and Shaw, Canada's Competition Bureau has now put an end to their cavorting (temporarily, at least) after seeking an injunction from the Competition Tribunal, the ultimate arbiter.

"The Bureau's application to the Tribunal alleges that eliminating Shaw would significantly increase Rogers' national market share  already the largest among the Big Three  and would significantly increase its market power," it said in its statement on the matter. Rogers has agreed to back off until it can either reach a negotiated settlement with the Bureau's Commissioner or persuade the Tribunal of its case.

Headcount at Rogers and Shaw 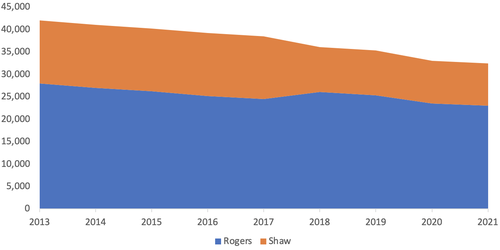 The obvious remedy would be a sale of Freedom Mobile, the mobile part of Shaw, even if this seems partly to undermine the case for a merger. Rogers has reportedly been in talks about a sale of Freedom Mobile to Xplornet, a rural Internet provider. Authorities are possibly worried that ripping Freedom Mobile out of Shaw and finding it a new home with a smaller company would leave it badly weakened. There has been media speculation authorities would prefer Quebecor, a company with media and telecom assets, as a buyer. But resolving all this looks problematic for Rogers.

Its justification continues to be that a C$26 billion (US$20.6 billion) takeover of Shaw would provide muscle for a speedier rollout of 5G. It is promising a C$2.5 billion ($2 billion) investment in 5G networks across western Canada over the next five years, the creation of up to 3,000 new jobs in that region, another C$3 billion ($2.4 billion) for additional spending on technology and services and low-cost broadband for poorer families.

What it neglected to mention in its latest statement are the less savory elements of the deal, first announced more than a year ago. Not that it happens to be a typical concern for competition authorities, but Rogers would be highly leveraged after the deal closes at a time of rising interest rates. It has never altered its forecast that "synergies" will exceed C$1 billion ($790 million) annually, despite the likelihood mobile assets will no longer be included. Regardless, synergies is typically a euphemism for cuts, and nobody in the public sector wants to be accused of being an accessory to layoffs.

The headcount implications of slashing annual expenses by C$1 billion are anybody's guess  "synergies," after all, could be realized in other areas  but Rogers and Shaw are already expert job cutters. Since 2013, they have pruned headcount by around 9,600 jobs across the two organizations, a massive 23% of the original total. Each looks comfortable wielding the axe.

Canada's authorities may have an eye on what happened in the US when T-Mobile merged with Sprint. Rather like Rogers, T-Mobile and German owner Deutsche Telekom had argued a tie-up would create jobs even as they talked about synergies. They also promised the combined company would employ more people than its standalone predecessors did. Data in regulatory filings shows that T-Mobile and Sprint together employed about 80,500 people in 2018, the year the deal was announced. Since the merger happened, T-Mobile's headcount has dropped to 75,000. Meanwhile, the impact on jobs in the wider economy has been hard to measure.

The chief concern of Canada's Competition Bureau seems to be that consumers will end up paying more for their telecom services if Rogers is allowed to pair with Shaw. Freedom Mobile under Shaw's wing is essentially viewed as a check on the pricing behavior of the Big Three. Yet they already control about 87% of the mobile market, according to the Bureau. Even if they are not quite as dominant as they used to be, government-directed efforts to make Canada a genuine four-player market on the European model have broadly failed.

Would prices rise if the merger went ahead with Freedom Mobile included? With only 2 million customers, it is dwarfed by Telus (11.4 million), Rogers (10.1 million) and Bell Canada (9.5 million). That does not mean it cannot exert pricing pressure, but studies on the impact of four-to-three-player mobile consolidation are inconclusive. Prices certainly look higher in the less competitive US market than they do in Europe. But each operator also has more to spend on network rollout, and capital intensity at T-Mobile (15.1% last year) is comparable to the figure for Deutsche Telekom's European subsidiaries (15.6%).

"Vigorous competition is essential for Canadians to access affordable, high-quality wireless services," said Matthew Boswell, Canada's Competition Commissioner, in his statement on the planned injunction. Everyone can probably agree on that much, at least.