LONDON -- Private Networks in a 5G World -- When Germany's government reserved a fat slice of valuable 5G spectrum for industrial giants like Bosch and Siemens, Deutsche Telekom was furious.

No wonder. The decision was blamed by Germany's biggest telecom operator for driving up spectrum fees during the country's 6.5 billion ($7.2 billion) auction this year. It has also raised unresolved questions about the role operators will play in the business sector: A factory with its own spectrum might see far less need for a traditional service provider.

Yet if operators are going to make any money from 5G, the business market still represents their best opportunity. "We do need eMBB [enhanced mobile broadband] to keep up with traffic growth, but additional revenue? Who will pay more?" said Antje Williams, Deutsche Telekom's senior vice president of 5G campus networks, in voicing skepticism about sales growth in the consumer market during a presentation here. The campus or private network, by contrast, could be fertile ground for her company. "We never made money from this before. It might not be billions, but we think this is an opportunity that is close to the [existing networks] business we have." 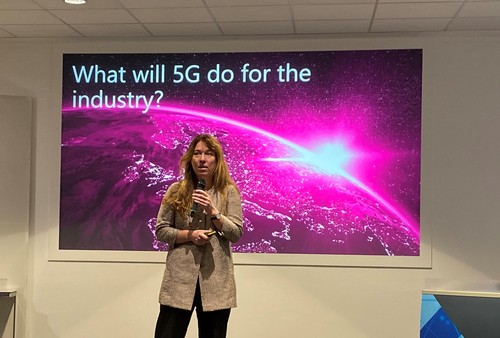 Deutsche Telekom has been desperate to prove it is needed. That started during the auction process, when it targeted (and secured) airwaves at 3.6GHz that lie adjacent to the 3.7-3.8GHz band reserved for industrial use. The German operator's 5G haul could be combined with a customer's own spectrum to provide a superior service, according to Williams.

She also makes a strong case for Deutsche Telekom's older frequency allocations and existing assets. The "mid-band" spectrum between 3.6GHz and 3.8GHz is unlikely to fulfil all companies' needs, partly because these airwaves do not provide good wide-area coverage or penetrate walls effectively. Besides giving companies access to alternative frequencies, Deutsche Telekom can also offer other services and technologies, including that important connection between the campus network and the much wider public network running on 4G or 5G technology. "You are not communicating only with the shop floor but sending information somewhere else," said Williams.

But there are some major challenges, she acknowledges. Perhaps the biggest is a cultural clash between business customers and telcos, which have mainly served the enterprise sector by selling SIM cards until now. A recent client discussion exposed these differences at a very basic level, said Williams, when Deutsche Telekom executives used the expression "router" to describe packet network gear and Siemens executives understood it to mean an on-premises device. Carl Arntzen, the CEO of Bosch subsidiary Worcester Bosch, told attendees he was similarly confused by the telecom industry's terminology. "I have no idea what you guys are talking about," he said.

Doubts also surround the need for a 5G-based campus network, as opposed to one using older 4G systems. Energy giant Shell would rather use a public 4G network to support internal systems and processes, largely because it is more cost-effective than a private 5G alternative, said Johan Krebbers, a senior IT executive at the firm. "We will use 5G, but we still have to learn where." That does not make life easier for Williams and her colleagues when they are trying to estimate the size of the 5G opportunity. "Everyone has an appetite, but we don't know how much they are going to eat," she said.

In the meantime, Williams is keen to promote "network slicing" on the public 5G network as an alternative to installing equipment at customer premises. With network slicing, operators say they can provide the same guarantees and security that a business would enjoy with its own core network. "There are smaller businesses that cannot afford this because it comes at a price," she said.

Others take a different view. Ukkoverkot, a 25-employee Scandinavian operator that specializes in private networks, cites a local core as a must in any deal. "We think you should have control and be able to secure the environment," said CEO Mikko Uusitalo. Onsite equipment ensures signaling delays do not become an issue, while falling prices mean equipment costs are no longer prohibitive for his company's clients, he added.

The clear danger for Deutsche Telekom and its consumer-focused peers is that other players in the ecosystem seize most of the opportunity. To smaller network companies like Ukkoverkot add systems integration specialists like SITA, which supports private network services for Heathrow Airport, and giant vendors such as Nokia, with its direct-to-enterprise sales channels and catalog of professional services. The award of spectrum directly to industrial groups heightens the risk that operators end up with a marginal connectivity role. If campus networks represent their best opportunity for 5G-related sales growth, that would surely be a disaster.