Here's how AT&T, Verizon and T-Mobile slice and dice 5G plans and pricing

Not all 5G is the same. Depending on the spectrum used and the pricing plan applied, different customers can receive drastically different 5G experiences in the exact same location.

First, all of the big US wireless network operators are employing the same basic revenue strategy for 5G as they did in 4G: Get customers on the lot with a cheap advertised price, then try to upsell them on the equivalent of bigger wheels and a fancier entertainment system.

But AT&T, Verizon and T-Mobile have different amounts of 5G network capacity.

Hence, T-Mobile can afford to be the simplest with 5G: Not only do all of its current plans include all of its 5G "flavors" of lowband, midband and highband 5G, its recent announcement of free upgrades to unlimited service for anybody on a legacy plan means every subscriber will also be 5G-eligible  even if their phone isn't up to the task.

For T-Mobile, 2.5GHz is its magic 5G number, because that midband spectrum both provides capacity unmatched by its competitors and delivers significantly faster speeds with decent range. Analyst Avi Greengart, president of Techsponential, called it "quite a compelling value proposition" for subscribers in T-Mobile's 2.5GHz coverage areas.

And so it makes sense for this carrier to go all-in on 5G. Said Entner: "For T-Mobile, it's a no-brainer."

But the usual finer-print limits on video resolution and mobile-hotspot use remain at T-Mobile even on that blessed bit of spectrum. Both its flagship Magenta plan, $70 a month for one line, and its $60 Essentials plan limit streaming video to a DVD's 480p resolution, while its $85 Magenta Max ups that to 4K UHD.

And while all three T-Mobile 5G plans include unlimited mobile hotspot at 3G speeds (which can rank as not bad, depending on the apps used on the tethered device), Magenta provides 5GB of full-speed mobile hotspot and Magenta Max throws in 40GB. 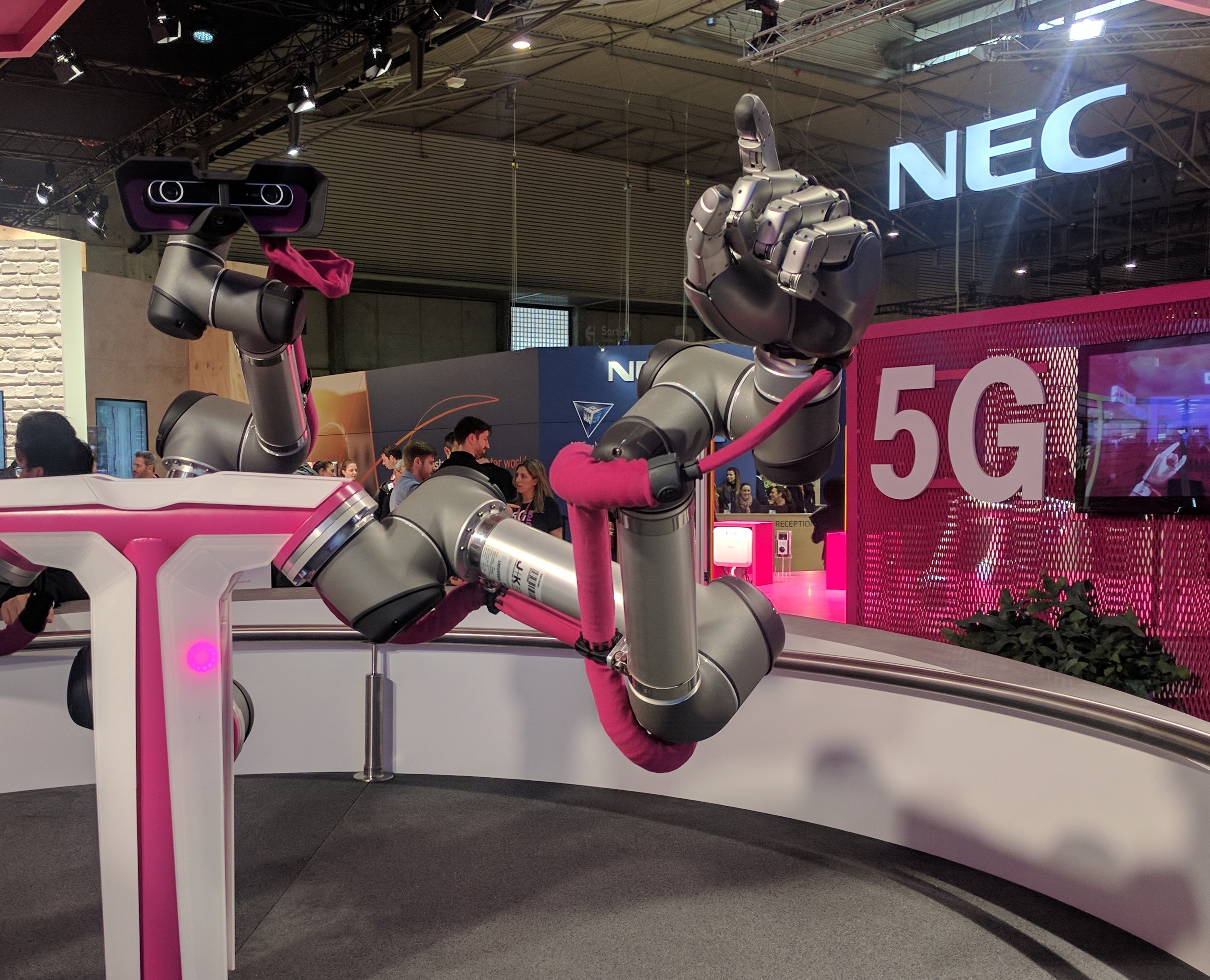 "T-Mobile 5G robot" by robpegoraro is licensed with CC BY-NC-SA 2.0.

At AT&T, things get a little more complex. All of its current unlimited plans include 5G  both its lowband service and the evanescent mmWave service it markets as "5G+." (The carrier hasn't announced how it will market its upcoming C-band 5G service.) Older plans werent grandfathered in until March, when AT&T extended 5G to legacy unlimited plans.

Jeff Moore, principal of Wave7 Research, said with unlimited plans accounting for 90% of AT&T's activations (per a 2020 disclosure by the firm), the carrier has effectively given up trying to make 5G a step-up offering.

Just as at T-Mobile, AT&T's 5G does not give subscribers a break on priority data, streaming video or mobile hotspot limits.

Finally, there's Verizon, where 5G might as well exist inside a series of nesting dolls.

All of its current plans  its four unlimited-on-phone options as well as its $55 5GB and $65 10GB plans  tout 5G. But only the three more expensive unlimited plans (Play More Unlimited and Do More Unlimited, both $80 for a single line, and Get More Unlimited, $90 for a single line) include the mmWave 5G network that Verizon has spent so much time talking up as "5G Done Right" as well as the "Nationwide" lowband 5G that even Verizon admits delivers speeds similar to 4G.

On those three plans, connecting to Verizon's (exceedingly scarce) mmWave 5G signal essentially catapults you into a no-rules zone. The usual 720p cap on streaming-video resolution is removed, allowing you to binge on 4K UHD. And mobile hotspot becomes completely unlimited instead of being constrained to 15GB on Play More and Do More or 30GB on Get More.

Moore questioned the viability of trying to make mmWave 5G a luxury good: "I doubt that anyone notices or cares, as 5G Ultra Wideband has availability of 1% or less."

Verizon's $70 Start Unlimited, meanwhile, only covers lowband 5G in addition to limiting streaming video to 480p, banning mobile hotspot and including zero priority data instead of the 50GB of priority data covered by the other three unlimited plans.

To further confuse matters, Verizon offers a $10 option to add mmWave 5G to Start Unlimited, even though that offers no discount compared to upgrading to the far more capable Play More or Do More plans.

(Verizon spokeswoman Jeannine Brew Braggs emailed: "There is more value for the money in the Play More and Do More plans, but we always like to give customers choices.")

The differences among Verizon's unlimited plans should get more stark at the end of 2021 when it begins deploying midband 5G on C-band frequencies  which the carrier has already said it will market and price as "Ultra Wideband."

And at both AT&T and Verizon, C-band should do a great deal to solve their current 5G capacity problems, bringing them more in-line with T-Mobile's midband 2.5GHz offerings.

What C-band and other upcoming 5G frequencies may not do, however, is coax customers into spending extra for the next generation of mobile broadband.

As Wave7's Moore put it: "Basically, I think that customers are not willing to pay more to have 5G."