IBM is now officially joining the likes of Amazon and Microsoft in chasing 5G operators' cloud business, and has assembled a team of partners to do it. 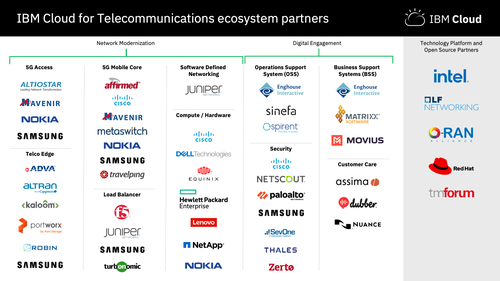 IBM's partners include a number of top-name telecom vendors.
Click here for a larger version of this image.
(Source: IBM)

"We are excited to launch the IBM Cloud for Telecommunications  an open, hybrid cloud architecture designed to help telecommunications providers address the specific challenges of the highly-regulated industry: accelerating business transformation, enhancing digital client engagement and improving agility as they modernize their enterprise applications and infrastructure to unlock the power of 5G and edge," Boville wrote.

He explained the offering will include Red Hat's OpenShift  acquired by IBM for $34 billion last year and widely used within the telecom industry  as well as the company's new Cloud Satellite edge computing service. Boville previously hinted at IBM's telecom ambitions during a presentation at a major wireless industry trade show last month.

Importantly, IBM is putting up some money  though the exact amount is unclear  to glue together its new telco cloud gang. The company said members of its new ecosystem will be able to tap into its Cloud Engagement Fund, described as "part of a $1 billion investment" by the company, for help with things like technical enablement and creating proofs of concept.

IBM's "Cloud for Telecommunications" will go up against similar services from the giant public cloud companies Google, Microsoft and Amazon.

As Omdia Principal Analyst James Crawshaw explained, IBM is positioning its offering as a way for operators to avoid getting stuck with one public cloud because IBM is promising that operators can shift their operations from IBM's cloud to any other public cloud. But, he said, the issue of vendor lock-in remains, given that IBM would remain the point of contact for those operations.

Crawshaw also pointed out that IBM's new partner lineup includes a wide range of participants including heavyweights like Nokia, Cisco and Samsung, but "the absence of Amdocs, Ericsson and Netcracker is disappointing."

However, he said that they could join at a later date.