DENVER -- CNG2019 -- Com Hem is Sweden's largest cable operator and, from 2009 to 2012, it also had the troubling distinction of having the least satisfied customers in the country.

Looking to reverse that trend, and put Com Hem in much better stead with its 1 million-plus customers, the company undertook a customer experience (CX) initiative in 2014. That effort tapped into various data sources on its network that, when analyzed together, could help to formulate a story about the quality of service and other performance-related issues that were negatively affecting services and, ultimately, Com Hem's customers.

"Quality of service was one of the most important pieces of this initiative," Rasmus Aveskogh, Com Hem's chief architect, explained here Thursday during a keynote presentation. He noted that this information was gathered from data silos spanning the company's RF quality department, the capacity department and the network operations centers. 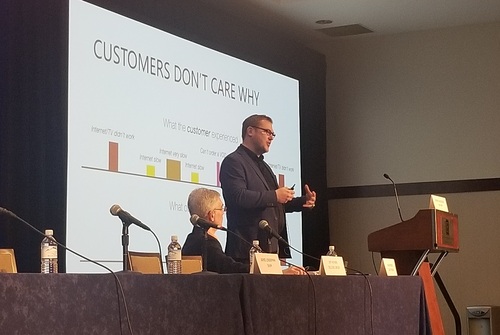 The idea, he said, was to create a data framework (compromised of data from WiFi, DOCSIS, network alarms and capacity, among other sources) and feed it all into a big data platform that could then translate it into something that tells a story about the broader experience -- Aveskogh called it "CX accounting" -- that provides a service timeline for each customer. Com Hem would know, for example, if its Internet service underperformed for an individual customer for 3.4 hours over four weeks. Com Hem could also use that data to forecast customer experience issues and try to take proactive measures to prevent them.

With this system, "QoS is measured in in real-time, all the time, for all services and all customers," Aveskogh said.

That initial batch of work got some results, as Com Hem posted record low churn (12.4%) alongside record high ARPU Q2 2017, improved NetPromotor Scores, notched high-performance marks from OTT services such as Netflix and YouTube, and topped the charts at Speedtest and Sweden's Bredbandskollen with respect to broadband speed performance.

"This all turned out quite well," Aveskogh said.

However, something changed in 2017 and those positive trends started to go the other way. Customer service calls went up and churn was back up to 14.8% by Q2 2017.

Com Hem created a task force to find out why, and discovered that the rise in performance-problems was tied to some "aggressive network changes," notably its deployment of DOCSIS 3.1, which used new spectrum that also happened to be in the neighborhood of cellular bands that was causing RF ingress and other cable network issues.

Com Hem also found that its first data tool could also help the company a grip on this issue and identify trouble spots that needed to be fixed, but likewise found that this new use case was too manual and time-consuming to be effective.

To address that, Com Hem added machine learning techniques that used trained models to find common anomalies in the data. From there, Com Hem could share that information in a way that can be visualized and pinpointed on a geographic and topographical level.

Com Hem, Aveskogh said, has also used this system to set up a simulator that could allow the company to stay a step ahead and predict how specific service groups might be impacted by the LTE interference issue.

He said this new machine learning-assisted approach resulted in an immediate drop in customer calls, including the lowest call ratio in five years in January 2019 alone. Com Hem has also seen churn drop down to the previous record low of 12.4%, saw ARPU rebound and subscriber levels rise.

Aveskogh said there's similar work underway at CableLabs to help its members use network data to improve the broader customer service. "Until then, we're going to work this way," he said.