After years of development and steady percolation in trials and labs, 2021 is shaping up to be a milestone year for disaggregation in packet and optical transport networks.

This blog is the first of two highlighting the key findings from the disaggregated networking project. It focuses on high level findings from the global survey combined with key insights from Telefónica and South Africa's MTN, both of which provided keynotes at the related webinar on January 26.

A need for flexibility and innovation

Faster innovation and flexibility in adopting the latest technology is the top driver for disaggregated networks based on the survey results. This factor was selected by 51% of respondents. Forming a second tier of motivators is the ability to launch new services and increase revenue (selected by 39% of respondents) and capex reduction (selected by 38%).

It is notable that, while it is an important factor, capex reduction is not the primary driver in deploying disaggregated networks. In the early days of white box and virtualization, capex reduction typically scored at the top of the list in terms of drivers. However, as time has progressed, operators have increasingly focused on services and revenue benefits  exactly as respondents have indicated in this survey.

What are the top factors motivating your organization to adopt disaggregated networking solutions? 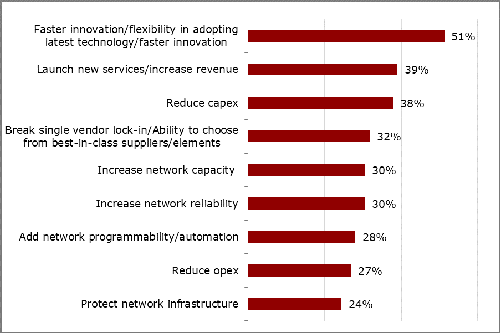 During the January webinar, keynote presenters from Telefónica and MTN underscored the importance of transport network disaggregation for speeding up network innovation and boosting revenue.

Network disaggregation is not without its set of challenges. Survey results show that dual challenges have risen to the top in terms of inhibiting disaggregated network deployments:

What are the biggest challenges to adopting/deploying open disaggregated networking technologies in your organization? 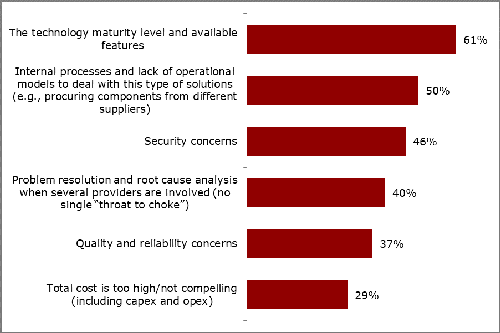 In his presentation, MTN's Mphahlele said he has been pleased, so far, with the functionality of disaggregated elements. However, he highlighted integration with the operator OSS and management environment as a key challenge that must be addressed to move forward. Key to success in this area, according to Mphahlele, will be open APIs that connect the network elements and domains below to the OSS and management systems above.

Heavy Reading has stressed the role of systems integrators in filling the operational and integration expertise gap. But, in addition to these third-party players, common architectures and standardized approaches must be both developed and agreed upon by a large number of operators and networking suppliers. Both Mphahlele and Telefónica's Cantó stressed this point in their talks. Groups such as TIP and the Open Compute Project (OCP) play essential roles in building consensus and common architectures, as do traditional standards organizations, including the Internet Engineering Task Force (IETF), Optical Internetworking Forum (OIF) and others. TIP has also been focusing on the testing and integration of products and end-to-end solutions. The community is coming together in plugfests and lab and field trials, and then listing the different validated offerings in the TIP Exchange marketplace with their corresponding badges.

A major difference from the past few years is that disaggregation has moved from the concept phase to reality and even commercial production  and not just for a single transport segment but across several. Globally, 27% of survey respondents reported some form of disaggregation deployments  though North American respondents were far more aggressive in deployments compared to other regions.

In their keynotes, both Telefónica and MTN provided updates on their transport disaggregation initiatives and roadmaps  which span multiple segments today with more to come in the future. Working through TIP and its membership, Telefónica helped define technical requirements for a white box cell site router (or disaggregated cell site gateway [DCSG]). Based on TIP's requirements documents, Telefónica has now deployed commercial DCSGs in Germany, Peru and Ecuador, with more countries to come online in the future. Also working with TIP community members, Telefónica is addressing fixed access disaggregation within the Open BNG Subgroup. Technical requirements were released in October 2020. Additionally, Telefónica is active in optical projects Cassini (a packet-optical transponder) and Phoenix (400G DWDM white box transponder).

Like Telefónica, MTN is leading disaggregation with DCSG but has broader plans across packet and optical networks as well. MTN has completed a DCSG lab trial and, this quarter, is planning to run a large-scale field trial in one of its markets  a process that is in an advanced stage now, according to Mphahlele. MTN is also interested in the Phoenix 400G white box (prototyping in 1Q21) and the disaggregated open core router (RFI and prototyping in 1Q21). Beyond the scope of the survey project but important to many operators is disaggregated microwave backhaul. MTN is planning to move to lab trials with a disaggregated microwave product in 2Q21.

This blog is Sponsored by Infinera, IP Infusion, Volta and Telecom Infra Project.