As little children pen hopeful letters to Santa, oblivious to the supply chain problems that might ground his reindeer, 13 of Europe's telecom big hitters have been drafting their own Christmas wish list – destined for not Lapland but a government address in Brussels. Their requests will not surprise EU Competition Commissioner Margrethe Vestager. After all, they have wanted the same things for most of this century.

Topping the list is the routine call for a laissez-faire regulatory approach to mergers. Regional and national authorities have loved to obstruct consolidation, determined to protect highly competitive markets. The incumbents, unsurprisingly, want that stopped. Nor do they want to pay exorbitant fees for spectrum or see it carved out for new entrants, their second request makes clear.

But the item that made a Reuters headline earlier this week is a real throwback – the complaint that technology giants ride freely on telecom networks. Investments, say the operators, "can only be sustainable if such big tech platforms contribute fairly to network costs." To many observers, that argument will smell worse than the Stilton left to moulder after last year's aborted Christmas celebrations. 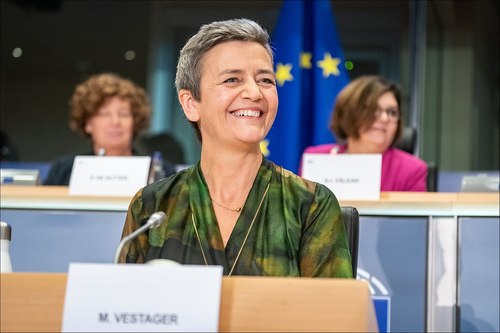 The signatories include the bosses of all of Europe's big telco incumbents, plus a few smaller ones. Its originator is unclear, although it was published on the website of ETNO, a sort of country club for operators. Perhaps, during a round of golf, whether physical or virtual, one CEO proposed the petition and no one demurred. Or maybe caddies came up with the idea. Either way, it is both a startling example of groupthink and an admission of failure.

Failure, year after year, to convince authorities of their case while toiling under the apparent misconception that regulators are to blame for all their problems. Look to the US and China, they say, where telecom oligopolies have been allowed to serve hundreds of millions of customers. But AT&T, worth just one-fifteenth as much as Microsoft, is equally threatened by US big tech. Amid bad decision-making, its long-term debt has rocketed from about $60 billion to more than $150 billion in the last decade. Meanwhile, China's government-directed 5G rollout has cost billions and produced little of genuine value.

Whatever the head honchos of European telecom might say about the eye-watering cost of building networks (300 billion/$340 billion is needed in additional investment for gigabit services, they reckon), there is ample investor appetite for infrastructure assets. Private equity funds have piled into the sector, chasing fiber builders and mobile towers. The share price of Cellnex, Europe's biggest towers specialist, has soared 163% since early 2019, valuing the company at nearly 36 billion ($41 billion). That is about 13 billion ($15 billion) more than the increasingly asset-light Telefónica is worth.

The sustainability of this model may be in doubt if returns are being squeezed by competition and operators are not allowed to merge. But that is no excuse for the poor track record on service innovation by companies that are still highly profitable. Too many "service providers" do the same thing, and not especially well. Billions have been wasted on ill-conceived content and media businesses that Amazon, Disney and Netflix have swiftly overtaken. In place of telco innovation are the begging letters to Europe.

Doublethink appears to be another telco affliction, judging by the content of the latest missive. Telcos love or loathe big tech, depending on the circumstances. They strengthen it through deals with public cloud providers one minute and complain to regulators about its growing power the next. They insist there is no rivalry with big tech when partnerships are on the table. Yet there is no question "that telecom operators compete face-to-face with services by big tech," they say in their letter. One thing is certain: Tie-ups with telcos will not make big tech any smaller.

The snow's coming down

It is hard to be entirely unsympathetic given all the regulatory shortcomings. Spectrum auctions have clearly been engineered by some governments (see Italy's 5G award) to extract as much lucre from the private sector as possible. The dedication to preserving four-player network markets is probably not always in the consumer's long-term interest. Red tape abounds. Europe's stance on net neutrality – the principle that stops operators from charging big tech for network usage – is unfathomable.

What then will Vestager and her little helpers make of the latest wish list? Telco chiefs are often caught musing about an improvement in the regulatory climate – usually on calls with financial analysts. But there has not been a marked change in a decade of musing. If she seems less overtly hostile to the investment community than previous officials, Vestager is unlikely to reverse course entirely – welcoming in-country consolidation and scrapping any commitment to net neutrality.

The gift seekers might take some comfort from the government backlash against big tech on both sides of the Atlantic. Designed to restrain it, Europe's new Digital Markets Act, hopes Deutsche Telekom CEO Timotheus Höttges, would stop a company like Microsoft from buying small suppliers to operators and thwarting telco efforts to diversify the market. But it is a far cry from that to a total rethink of net neutrality.

Perhaps this is one of those aim-high letters, like the Christmas wish lists asking for a first car or diamond-encrusted Xbox. Let the gift giver know that expectations are raised and settle for the compromise of a half-decent bike or some PlayStation games. Stay silent and risk a knitted sweater or new pair of socks. Even the luckiest recipients usually realize the most generous gifts do not change their fortunes.