Hitron Technologies has introduced what is billed as the first DOCSIS 3.1 modem to support the DOCSIS Time Protocol, a technique that enables cable operators to provide mobile backhaul for 4G and 5G services over their widely deployed hybrid fiber/coax (HFC) networks.

Hitron's new entry, called the ODIN1112, combines a DOCSIS 3.1 modem with a small cell gateway. The DOCSIS Time Protocol (DTP) element enables a low latency Xhaul capability that coordinates the precise timing between the controller and the HFC network's endpoints, a critical requirement for cell backhaul over DOCSIS. Boiled down further, this new piece of DTP circuitry coordinates the DOCSIS network's timing and connects to the radio access network (RAN) and keeps the two sides in sync. 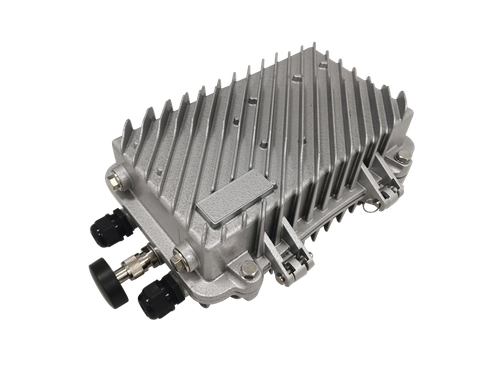 The ODIN1112 is a hardened cable modem with two 2.5 GigE ports and 90 watts of PoE (power over Ethernet) on each port.
(Source: Hitron)

Greg Fisher, president of Hitron Technologies Americas, said there's a big economic benefit, as the DTP can be used to sync up the clocks of those network elements without needing a costly GPS (global positioning system) receiver. Using the DOCSIS network also provides a direct connection, obviating the need for a GPS device that requires line-of-sight to the satellite.

Fisher believes the new product will provide cable operators with an opportunity to play a greater role in providing mobile backhaul services, including those that use millimeter-wave spectrum.

"There's a tremendous amount of DOCSIS out there," he said. The resulting small cells with DTP baked in, he added, will help deliver backhaul for a cable operator's own mobile offerings (via MVNO deals or among those that are mobile network operators themselves) or for other MNOs.

"A lot of folks are initially targeting fiber to that for the backhaul. It makes sense, easy to do and pretty well defined," Fisher said. "But getting the freedom to pull DOCSIS out of the toolkit, as well, is the implication here."

He said the need for that would become more acute with cellular nodes deployed in high-density areas that backup a traditional larger cell network area or are used to add capacity where usage is relatively high.

Fisher believes the new offering could support not just mobile calls, but also for wireless data and IoT-related services. Apps and services "that need connectivity and reasonably low latency are going to open up as part of this initiative," he said.

Hitron envisions the ODIN1112 being deployed on and powered by the HFC network and effectively serve as a distributed wireless node that one would use for 5G and/or a CBRS network. Deployments should require "a pretty low lift" for cable operators, Fisher believes.

Early on, Hitron has teamed with Cisco Systems, a long-time advocate for DTP. They've collaborated on code for Cisco's cBR-8 cable modem termination system that can support Hitron's new DTP-capable modem. Hitron will likely need similar integrations with other DOCSIS network vendors, including CommScope, Casa Systems and Harmonic, to cover its bases. Hitron has also connected with Cisco and CableLabs on some initial lab testing.

DTP was introduced in 2012 as part of the CableLabs DOCSIS 3.1 specs, but later refined with the 2018 release of the CableLabs Synchronization Techniques for DOCSIS Technology Specification, the first under a new category of DOCSIS specs tailored for mobile applications.

DTP has yet to reach commercial deployment. Some units could get into the field later this year. "2022, I think, is where this stuff starts to pick up some steam," Fisher predicted.

Hitron is also looking into developing an indoor version of the product.