Not since model Jerry Hall announced she was tying the knot with grizzled media mogul Rupert Murdoch has there been a more unlikely marriage as the one announced early Thursday between Ribbon Communications and ECI Telecom.

The deal has been announced as a merger, but Ribbon -- the name adopted by the 2017 combination of Genband and Sonus -- is handing over $324 million in cash and 32.5 million shares to bring ECI on board. (See this press release for full details.)

Those Ribbon shares are worth a lot less than they were earlier in the week, as news of the deal came hand-in-hand with the departure of Ribbon CEO Fritz Hobbs, who handled the Genband/Sonus integration and teed up the ECI deal. Ribbon's stock tanked by 23% to close Thursday at $3.00.

The CEO role at Ribbon is being shared temporarily by Steven Bruny, head of Global Sales and Services, and Kevin Riley, chief technology officer: They will now have to field the questions from colleagues, partners and customers about Hobbs's departure and, more pertinently, the somewhat head-scratching deal.

The two companies don't look like a natural fit.

But that might just suit Ribbon. In 2018 it generated revenues of $578 million and sees its total addressable market (TAM) as hitting around $3 billion in 2022, so growth in what is a competitive market is likely limited. Its sales for the first nine months of this year, at $402 million, were down a few percentage points year-on-year. Ribbon has likely peaked.

Just Look at That Packet/Optical Growth! 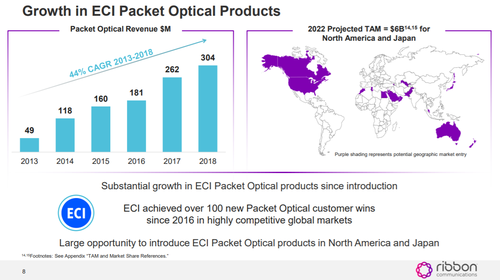 By adding ECI to its portfolio, Ribbon believes its TAM leaps from $3 billion to $39 billion in 2022, with 4G/5G-related mobile xhaul (fronthaul/midhaul/backhaul) transport network investments accounting for more than $8 billion of that TAM number alone. 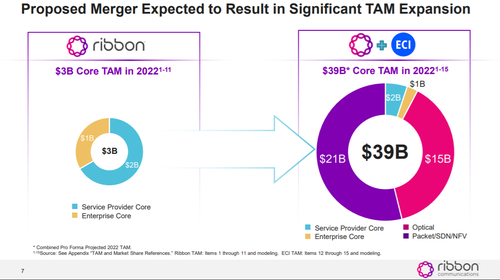 "If you are looking for the usual 'synergies' of M&A, you're not going to find them," notes Heavy Reading's principal analyst, optical networking and transport, Sterling Perrin. "Ribbon is looking to move into a completely new line of business and has chosen transport as the market to enter, and ECI as the company to get them in. They see flatness in their core voice business and growth in transport, particularly the xhaul transport opportunities tied to 5G. There are gains to be had if they can pull it off. ECI has, for decades, been a solid player in packet-optical but lacking in two areas: marketing power and presence in North America. Ribbon has a strong presence in North America, but they will need to translate those voice business relationships into transport business relationships. It's not easy, but ECI will have far better potential in North America as part of Ribbon than it did on its own. Ribbon will also have to preserve ECI's strong existing relationships with operators outside North America," notes Perrin.

Part of that 5G attraction for Ribbon will have been that ECI is a preferred transport equipment partner for mobile network infrastructure giant Ericsson.

The deal also ends an interesting couple of years of speculation about ECI's future, during which it abandoned some IPO plans and was linked to some M&A scouting by Cisco: Now it has found a home.

In the meantime, Ribbon will need to placate its investors: Its share price is down another 5% to $2.85 Friday.

Sterling Perrin 11/17/2019 | 7:24:41 PM
Re: Questions that I think that Ribbon needs to think about I believe little change to the transport network is needed for the vast majority of early 5G launches we've seen to date. It's the mass market, Release 16-based launches with new use cases that will require the big changes.

This implies that there are 0 installations of 5G.  Which I think is not true.

In the case of 5G transport, I don't believe the vendors have been selected. So that's the opportunity they are after.

So, I get the idea of the acquisition.  I understand your comments about ECI in North America.

I think the question is:  Is there an opportunity to enter in packet-optical in 5G or are those vendors already selected?

My answer would be, I think they are mostly already selected.  If so, then I am not sure that Ribbon adds much to ECI.