Beleaguered wireline service provider Frontier Communications is on the cusp of filing for bankruptcy as part of a new restructuring plan, according to multiple business media reports.

Reports suggest the US telecom operator, which appointed Bernie Han as its new CEO only seven weeks ago, met with creditors and advisors to inform them of the plan to declare bankruptcy as soon as March, in order to implement a new recovery strategy and seek their support for that move.

Frontier, which has been losing customers and reporting shrinking revenues for several years, ended September 2019 with $17.56 billion in debt. For the three months to the end of September, it reported revenues of just under $2 billion, down 6% year-on-year, and a net loss of $345 million. The operator ended September with just over 19,100 employees.

The company, which currently offers services in 29 US states, is in the process of selling its operations in Washington, Oregon, Idaho and Montana for $1.352 billion in cash.

The main worry for Frontier is that, in a communications market dominated by mobile services, it has no cellular business. Other US operators, including AT&T and Verizon, are rationalizing their wireline operations, but have their significant mobile and enterprise operations to fuel the business.

Frontier applied to take part in the US auction of 28GHz spectrum in early 2019 but did not qualify for the bidding process.

Verizon can look back at its $10.5 billion sale of wireline operations to Frontier in 2016 as a canny bit of business. For Frontier, that now looks like a defining moment, and not in a good way.

Frontier's Value Has Crashed in the Past 5 Years 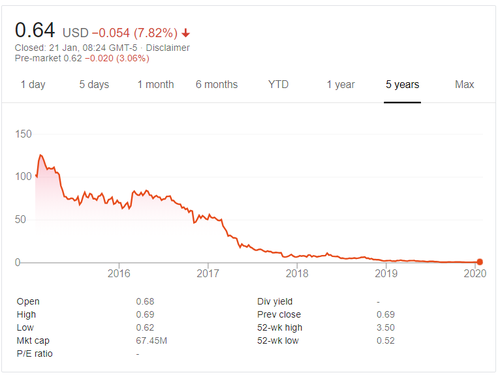 It would be an interesting excercise to compare the long-term financial health of the likes of Frontier, which followed Wall St. dicta and refused to invest, with the likes of Cincinnati Bell, which is well along in their copper-to-FTTH transition.
Reply | Post Message | MESSAGES LIST | START A BOARD

phillipdampier 1/21/2020 | 12:04:17 PM
Too Little, Too Late I recall talking to Wall Street analysts about Frontier almost a decade ago, warning them that this company was destined for inevitable Chapter 11 because their business plan was basically riding on their deteriorating legacy copper wireline facilities as long as possible and acquiring Verizon and AT&T wireline castoffs to keep revenue adequate for the all-important dividend payout.

Frontier's legacy territories have been stuck with DSL service that in far too many areas has not been upgraded in over a decade. Major suburbs in many cities are still stuck with 3 Mbps maximum speed service. Frontier was all too happy to sell its acquired fiber to the home services but loathed the idea of spending its money to upgrade its own territories to offer competitive broadband.

So here we are. Frontier's business has been eroded away by cable, particularly after the industry adopted DOCSIS 3.1. There is simply no reason for anyone to do business with Frontier in its large legacy territory. With gotcha fees, surcharges, and onerous contracts, customers can literally pay as much or more than what the competing cable operator charges for far faster service. Want a landline? You can pay Frontier over $30 a month after taxes and fees or companies like Spectrum just $9.99. A triple play for most Frontier customers means 6-10 Mbps DSL, a copper landline, and a resale agreement with DirecTV or Dish satellite. Hardly a compelling proposition.

Frontier's acquisitions bled the company dry when it should have been spending money on major upgrade initiatives. It is literally the only way this company will stay relevant as 5G and gigabit cable internet emerge. A lot of Wall Street analysts did not want to hear that message, because it meant billions in new capex, but it is reality. Frontier also needs a major customer service overhaul, because billing is a load of tricks and traps. Service calls can literally take weeks to be resolved.