NICE, France -- NGON & DCI World 2019 -- Anyone hoping for a major boost in spending on optical networking systems in the build-up to 5G launches will have been disappointed, according to market data revealed here at the annual gathering of Europe's transport networking market in Nice.

The overall value of the global optical network equipment market has been around $15 billion per year for the past decade, with some variations from year to year, noted Ian Redpath, who leads the Optical Networks, Optical Components and Core Switching practice at research house Ovum. How that money has been spent has shifted though, with a greater percentage of overall spend going towards metro optical networks as the years have progressed.

More specifically, increasing amounts of capex have been spent on what Redpath calls "purpose-built DCI" (data center interconnect) equipment: That market has grown from almost nothing in early 2015 to be a $1 billion-plus market in 2018.

But there's hope on the horizon, it seems. Redpath expects the market to break that $15-billion trend in the next five years as 5G strategies crystalize, large enterprises invest in optical systems, and 5G transport investments finally start to kick in, especially at the edge of the network: If the Ovum man's crystal ball is in good working order, the market could grow by more than a third by 2023.

That's good news for the likes of Ciena, Nokia, Huawei, Infinera, ADVA, ECI, Cisco, Fujitsu, ZTE, Ekinops and others who would welcome any increased spend on optical networking systems.

Other snippets from the proceedings here in Nice include:

Telecom Italia's Rossella Tavilla, a long-time optical network engineer, also highlighted the desire for greater automation in the national operator's transport networks: During a keynote presentation here she noted that the introduction of SDN controllers that can enable automated network management processes is part of the operator's next-generation optical plans.

It's still early days, though. Emir Halilovic, principal analyst on the Service Provider Infrastructure team at research firm GlobalData, noted there's a "lot of work going into this from vendors, and the operators want greater automation too," but added that "we are a long way from having automated networks." 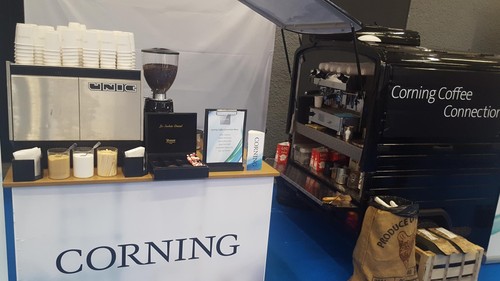 Corning's coffee cart... this was before the show floor opened and the only time there wasn't a queue to a 'hit'...