Telecom executives are queueing up to profess their love for open RAN (O-RAN), but hardly any have made it past a brief flirtation with the red-hot technology.

Nervous about the risks of a full-blown affair with something so immature, they still spend most of their time in the embrace of the traditional.

But attitudes are changing fast. Nick Read, the CEO of UK-based Vodafone, thinks O-RAN could be a feasible urban alternative to Huawei, an out-of-favor Chinese vendor, by 2022 (although Scott Petty, the chief technology officer of Vodafone's UK business, reckons 2025 is more realistic). 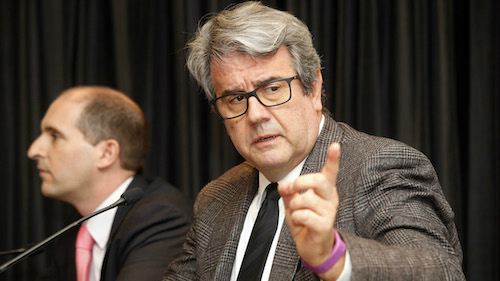 Now Spain's Telefónica has stepped forward with a huge commitment.

Back in March, it promised to carry out O-RAN trials, covering both 4G and 5G technology, in its core markets of Germany, Spain, the UK and Brazil this year.

If these go to plan, up to half its investments in radio access networks between 2022 and 2025 will be in O-RAN, says Enrique Blanco, Telefónica's chief technology and information officer, in an exclusive column for Light Reading.

The goal, he says, is to "ramp up towards the thousands of nodes in these markets."

The surge of interest in O-RAN is a big challenge to Huawei, Ericsson and Nokia, the traditional mainstays of the mobile market.

Each currently sells highly customized products that force operators into a monogamous relationship with the supplier in question.

O-RAN promotes polygamy, allowing a service provider to use one supplier's baseband products (used to process signals) with another's radios. Operators see it as a way to boost competition and lower costs.

The O-RAN catwalk
Telefónica is already parading alternatives to the big three vendors on its supplier catwalk.

Altiostar, a US software company in which it has taken a stake, has developed 4G and 5G software that will power the radios during trials.

Gigatera Communications, another US firm, is to provide remote radio units. Those will incorporate advanced components  known as field programmable gate arrays (FPGAs)  from Xilinx.

Based on Intel's X86 platform, the servers used in this set-up will be supplied by Super Micro.

What explains the recent momentum? Partly, it stems from the US-led assault on Huawei.

Government efforts to restrict the Chinese firm, or block its access to vital components, have driven some operators to look at O-RAN more seriously.

In the absence of Huawei, few like the idea of being entirely dependent on Ericsson and Nokia, the only traditional alternatives able to support older communications technologies.

In their campaign against Huawei, US authorities are now using the word "clean" to describe foreign networks that are free of Chinese influence.

Telefónica has been eager to prove it is not dirty.

"Telefónica Spain and O2 (UK) are fully clean networks, and Telefónica Deutschland (Germany) and Vivo (Brazil) will be in the near future without equipment from any untrusted vendors," said José María Álvarez-Pallete López, Telefónica's CEO, in a statement.

The message could hardly be clearer. Whether or not authorities in Germany and Brazil decide to exclude or restrict Huawei, the embattled Chinese vendor seems unlikely to feature in Telefónica's main networks in future.

In Germany, around 50% of Telefónica's radio access network products are supplied by Huawei, according to Strand Consult, an advisory group.

An O-RAN deployment could be a priority there, especially if Germany's government mandates the use of the technology, in accordance with Deutsche Telekom's wishes.

Is innovation delivering?
But the Huawei backlash does not fully explain why O-RAN looks more attractive now than it did last year.

Long-running concern about its technological shortcomings is slowly dissipating. Rakuten's Japanese deployment may help to convince naysayers that O-RAN can measure up to customized products in an advanced market.

Telefónica's Blanco is similarly optimistic. In his column, he dismisses fears of a lag in radio semiconductor innovation, expressing confidence that new designs will generate "O-RAN-compliant radios that can meet advanced 5G requirements."

There is also confidence within Telefónica that Intel's latest "Ice Lake Xeon" family of processors could meet performance needs, especially when used in conjunction with more customized Intel chips for so-called "hardware acceleration."

In recent weeks, analysts have been tweaking their spreadsheet models to reflect the O-RAN momentum.

By the mid-2020s, the young technology might feasibly have taken a double-digit share of the overall RAN market, according to Stefan Pongratz, an analyst with Dell'Oro, a highly regarded market-research firm.

"Open RAN is picking up momentum, and we have adjusted the forecast to reflect a more favorable outlook," he said in a July statement about Dell'Oro's latest findings.

A major uncertainty is what role the traditional vendors will play in this sub-market.

Regardless of its O-RAN stance, Huawei seems increasingly unlikely to figure in the O-RAN plans of any Western service provider.

Nokia is already touting O-RAN products, while Ericsson sounds less resistant than it once did. Each could swallow and squeeze out smaller rivals as it adapts to an O-RAN future.

Service providers with a lustful eye on younger partners may be desperate to avoid that outcome.