When the chief technology officer of Rakuten Mobile set out to build a new Japanese mobile network based mainly on cloud and software technologies, industry veterans scoffed.

His open RAN, allowing products from different suppliers to be used at the same site, would never match the customized systems provided by Huawei, Ericsson and Nokia, they said.

The criticism served only to motivate open RAN's most intrepid explorer, and his latest dispatch from previously unmapped territory looks hard to rubbish. 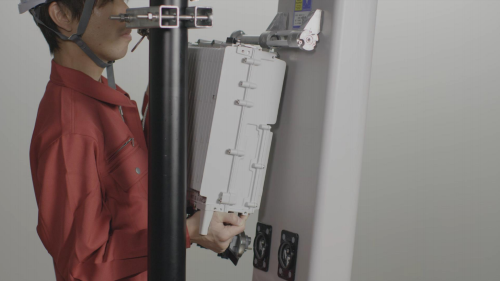 Rakuten says installing its remote radio unit is as easy as building Lego.

The headline mobile news from the Japanese e-commerce business is twofold.

First, while declining to share updated customer numbers, Rakuten is touting 1 million sign-ups at the end of June for the service it launched in April.

Second, it has advanced its network deployment targets significantly. Previously, its aim was to cover about 96% of Japan's population by 2026. It now thinks it can reach this level by the summer of next year.

No explosions
The figure of 1 million customers had already been disclosed, and in a country of more than 126 million people it does not sound overly impressive.

It does, however, put Rakuten within reach of its 3-million target by the end of the year.

And while Rakuten still relies heavily on the use of rival KDDI's network, faster growth would have brought additional costs.

"I think it was about what we anticipated," said Hiroshi Mikitani, Rakuten's CEO, during a Zoom call with reporters and analysts today.

"To be honest, if we sell explosively at this point in time, then we have to pay roaming fees, so it is at a level we are comfortable with and for the time being we would like to stay at that pace."

More importantly, network usage in a commercial setting has provided metrics that should help to silence a few critics.

With the unlimited data plan, an average customer is using about half a gigabyte a day, more than twice as much as a typical customer of any traditional Japanese operator.

As take-up has risen, service availability is tracking at about 99.7%, says the company.

On parameters such as 4G availability, voice app experience and games experience, Rakuten measures up to its competitors.

It is substantially ahead on upload speeds but falls somewhat behind on download. When it comes to the video experience, it lags slightly. 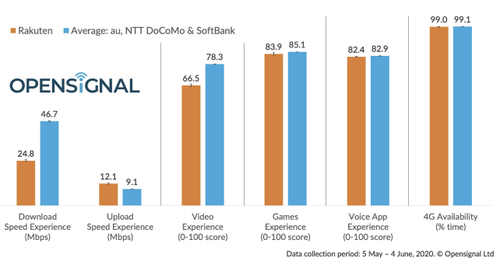 "It is no longer whether it will work but what's next," said Amin, presenting the "world-class metrics" as a validation of his efforts so far. "We have removed the shackles from consumers' hands."

Many would seem to agree. Overall satisfaction levels for the service are about 80% in a country known for its tech-savvy and finicky customers.

Steaming ahead
After a 5G launch was previously delayed until late September, the plans to speed up network deployment are another confidence booster. Would any explorer machete into the wilderness if the ground were turning swampy?

"By March 2021, we will be able to realize the target of 70% population coverage and by next summer what we were saying for 2026 will happen," said Mikitani. Just a year from now, the network should cover more than 90% of the population.

Rollout has been aided by technology simplification, according to Amin.

By combining remote radio units with special adapters, Rakuten claims to have made installation as easy as building Lego.

He also boasts a 30% coverage improvement per site compared with his rivals. That could address concern that Rakuten has far fewer basestations than any other Japanese telco.

"We have one band and one technology today, but our remote radio head is a massive high-upper-power product at 160 watts," said Amin. "This is innovation."

For all the trumpeted cost savings, the accelerated rollout  what executives call "front-loading"  will be an additional short-term burden on company financials.

Group results today show that revenues were up 13.4% year-on-year in the second quarter, to 347.3 billion Japanese yen (US$3.3 billion), and yet Rakuten ran up a JPY32.6 billion ($310 million) loss, compared with a JPY3.2 billion profit ($30 million) last year, largely because of mobile infrastructure costs.

"The cost will be incurred earlier and therefore there is some negative impact," said Mikitani when quizzed about the ramifications of the front-loading plan.

The payoff would come if Rakuten can speed up subscriber acquisition and wean itself off a costly roaming relationship with KDDI.

Rakuten hopes to lure customers with fees that are just half those charged by rivals for equivalent services. Its low-cost networks give it a major pricing advantage, it has argued.

Analysts at New Street Research remain unconvinced, pointing out that Rakuten has recently had to sell a stake in Overdrive, an e-books company, to cover mobile losses.

"We are cautious on Rakuten as we think the signs are that mobile is set to be a meaningful driver of losses going forward," said New Street Research in a published note.

Eye on the global prize
The prize for Rakuten is bigger than Japan's mobile market alone.

Mikitani and Amin have an ambitious plan to market the Rakuten Communications Platform (RCP) that underpins their own service to operators in other parts of the world.

Customers would simply click to buy and operate a variety of network and IT products, validated by Rakuten in Japan, much as a consumer fills an online shopping cart with groceries.

RCP discussions are now underway with more than 70 operators and governments worldwide, said James Crawshaw, a principal analyst with Omdia, in a LinkedIn update.

"They are pursuing the holy grail of a platform model with RCP, providing a marketplace where operators can pick and mix their favorite combination of cloud-native applications."

Competition in this telco cloud market is already intense, featuring companies from the hyperscale and equipment vendor worlds.

But none is a telco that has traversed the same jungle of cloud and software technologies and is now seeing daylight on the other side.

"Tareq Amin is a pretty convincing guy, so I can see other operators signing up for RCP and at least doing some trials," said Crawshaw.

UPDATE AND CORRECTION: Story has been updated to include analyst commentary published by New Street Research. The value of the international market opportunity for RCP was previously cited in the billions of Japanese yen. That should have been trillions and has now been corrected.