How telcos installed a RAN triumvirate they now want toppled

Alcatel, Lucent, Motorola, Nortel and Siemens all used to be familiar names in the mobile infrastructure market. Only Motorola's survives, and it has lost its authority. In 2010, its main mobile assets were sold to Nokia Siemens Networks, a merger between the Finnish and German companies. Nokia subsequently bought out Siemens and acquired Alcatel-Lucent, the product of a dubious marriage that happened in 2006. Nortel went belly-up in 2009 when it filed for bankruptcy.

These antics have left the industry with just a few giant providers of equipment used in the radio access network (RAN) market. In recent years, the big three  Ericsson, Huawei and Nokia  have looked more dominant than ever, collecting about 80% of revenues, according to some estimates. Few customers or governments sound overjoyed. Open RAN, a protest movement calling for supplier diversity, is backed by the world's largest operators. Authorities also throng its ranks. "Open RAN is obviously the ultimate approach on the standards front," said Aaron Bell, a member of the UK's governing Conservative Party, during a parliamentary enquiry on telecom last month.

But operators and governments have been complicit in the transfer of power to this equipment triumvirate. They created the circumstances that made consolidation inevitable and were blessing it as recently as 2016. Like a fickle electorate, they are suddenly disenchanted with the regime they installed. Open RAN activists should take note.

When diversity was not a priority

First, Huawei: European service providers continued to buy equipment from this controversial Chinese vendor long after Cisco took it to court for intellectual property theft. They were seemingly oblivious when the US government, during the presidency of Barack Obama, warned its service providers that both Huawei and ZTE, a smaller Chinese vendor, were security risks.

In 2013, Karel De Gucht, then European commissioner for trade, accused the two Chinese companies of anti-competitive predatory pricing. "Huawei and ZTE are dumping their products on the European market," he told Reuters. It made no difference. Huawei overtook Ericsson in 2015 to become the world's largest telco supplier.

Nurtured by the likes of BT and Deutsche Telekom, low-cost Chinese vendors decimated their Western rivals. Prices were forced down amid suspicion that Huawei and ZTE were receiving billions of dollars in Chinese state aid. The steady erosion of market share triggered a sequence of mergers that culminated in Nokia's 15.6 billion takeover of Alcatel-Lucent in 2016.

By that stage, anyone worried about supplier diversity should have been squawking like a farmyard animal primed for the chop. Just four companies  Alcatel-Lucent, Ericsson, Huawei and Nokia  were responsible for between 85% and 90% of the RAN market in 2014, according to the European Commission's paperwork for its decision about Nokia's takeover of Alcatel-Lucent.

Yet, amazingly, there were almost no objections to the merger between the two players. In April 2015, when the deal was in the regulatory pipeline, Nokia CEO Rajeev Suri told analysts that every customer he had spoken to was supportive. "They see it as a way to ensure there are three strong global competitors and not as a reduction in competition," he said. "They see it as a way to protect investments of the past while enabling the innovation of the future."

Those comments tally with the European Commission's findings. Not a single customer raised concern about the transaction's effect on the RAN market, it said. "On the contrary, virtually unanimously, the customers who replied to the market investigation consider the overall impact of the transaction on the RAN market to be neutral, with some customers even considering that the transaction may have a positive and pro-competitive effect both at worldwide and at EEA [European Economic Area] level: in their view the transaction would indeed strengthen Nokia's and Alcatel's respective proposition to customers and guarantee viable competition going forward in the RAN equipment marketplace."

Not everyone was happy. Post-merger, the world's three largest RAN vendors would be dominant, one competitor pointed out. It also argued that incumbent vendors would have an inherent advantage because of the need for compatibility between next-generation and earlier technologies. That was prescient considering today's debate about the difficulty of swapping vendors in the move from 4G to 5G.

The European Commission's response to those complaints was to brush them dismissively aside. None was "sufficiently substantiated," it said in its decision. As everyone knows, the deal was eventually approved  and not just by European authorities but by regulators worldwide. After a showdown with China that Europe should have anticipated, it is hard to imagine the same outcome now.

As operators dream of open RAN, there is scant evidence they overpay for traditional products, even after all this consolidation. Ericsson, viewed as the healthier of the two Nordic vendors, has only become profitable since 2016 by selling assets, offloading employees and pumping extra money into radio. It remains on track for an operating profit margin of about 10% this year. Nokia managed one of just 6.6% in its last fiscal quarter, and its share price tanked when it recently issued disappointing guidance for next year. These are not the profiles of companies that fleece their customers.

"People just haven't made the money and you have seen concentration," said Ian Livingston, a former BT CEO who now heads a UK taskforce set up to explore alternatives to the big kit vendors, during last month's parliamentary enquiry on telecom. 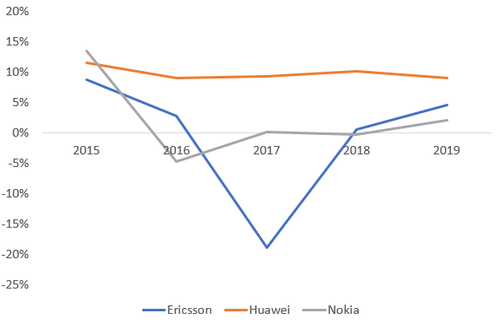 It is the operators that lay claim to most of the industry profits. The EBITDA margin, their preferred measure of profitability, topped 32% at Vodafone and 35% at BT for the six months to September. At Deutsche Telekom, it was more than 40% for the September-ending quarter. Telecom Italia boasted a margin of about 44% over the same period. Debts, investments and long-term strategy are all a concern for shareholders. Profitability is less so.

But Ericsson insists COTS equipment will turn out to be more expensive. "It would be sad if we build something that is only for one purpose and we cannot do it more cost effectively than with general purpose hardware," said Per Narvinger, the Swedish vendor's head of product area networks, in a recent interview. 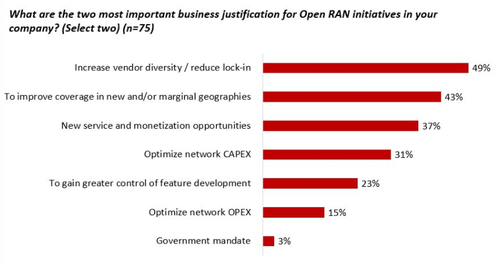 Some operators are also unconvinced by open RAN's cost promise. Only this week, Neville Ray, the chief technology officer of T-Mobile US, said that integrating different vendors, instead of relying on one big supplier, could be a costly business. Open RAN's commercial model is a "big TBD," he told an investor conference. "Most operators agree the capex (and especially opex) savings aren't there yet for open RAN," said Gabriel Brown, a principal analyst with Heavy Reading (a sister company to Light Reading), in a tweet about Ray's comments.

Perhaps operators would settle for higher fees if diversity is their main objective. But that is a huge if. A market in which a multitude of smallish RAN vendors battle industry giants for telco business sounds like it would be ripe for consolidation. Operators apparently made no fuss when two behemoths combined less than five years ago. That sets an awkward precedent for objecting to smaller deals.