As awkward as it may be for US hawks, China wields enormous influence over the development of open RAN. More than 40 Chinese companies are listed on the membership pages of the O-RAN Alliance, the group that develops open RAN specifications. Only the US is better represented. And China Mobile, the world's biggest operator, has been there from the start. A founding member, it is one of five companies to hold veto rights.

Yet a China rollout of open RAN would look counterintuitive to many international observers. Outside China, interest in the concept has been fueled by the backlash against Huawei, a Chinese vendor that grew to become the world's biggest supplier of mobile equipment during the 4G era. As governments ban or restrict Huawei, open RAN offers a future alternative, say its proponents. An alternative does not seem like a geopolitical necessity in China, where Huawei has an even bigger role in 5G than it had in deploying 4G.

Nevertheless, one of China Mobile's top boffins has reaffirmed the operator's open RAN commitment. "It is not a matter of if, but when," said Chih-Lin I, China Mobile's chief scientist for wireless technologies, during Light Reading's Open RAN Digital Symposium this week. 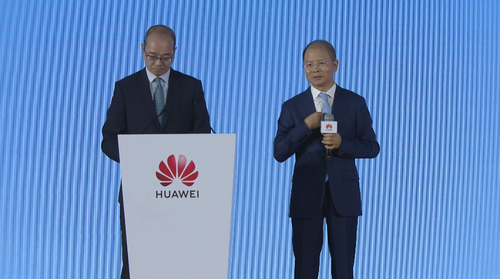 Eric Xu (right), one of Huawei's rotating bosses, is no fan of open RAN.
(Source: Huawei)

Geopolitics could partly explain why China Mobile considers open RAN to be important. As Europe has imposed restrictions on Huawei, China has appeared to retaliate by cutting the share of 5G contracts awarded to Sweden's Ericsson. Finland's Nokia has also lost out, failing to secure any 5G work in 2020 and picking up only a tiny percentage of this year's jobs. That leaves China Mobile  as well as rival operators China Telecom and China Unicom  heavily dependent on Huawei and ZTE at a time when US sanctions threaten the former's competitiveness. Local suppliers of open RAN technology may hold just as much appeal to Chinese operators as they do elsewhere.

Moreover, while Ericsson and Nokia have joined the O-RAN Alliance and unveiled some open RAN products, Huawei remains publicly opposed to the concept. Even before open RAN became politicized, Huawei was arguing that open RAN could not match traditional networks on performance. Whether or not the company works on open RAN in secret (as some commentators think), it would struggle to acquire the requisite components, such as x86 processors, unless US sanctions were lifted.

All this could be a problem for China Mobile, which evidently thinks open RAN would bring various benefits. "We believe in the long run that it will provide the whole ecosystem with lower costs and higher efficiency," said Chih-Lin, who is also the co-chair of the O-RAN Alliance's technical steering committee. "With the greater diversity and flexibility, we believe we'll enjoy higher security in more ways than one and be able to enjoy faster innovation."

But a major open RAN deployment seems even less likely in China than it does in other countries. Under government pressure, China's operators have been rolling out traditional 5G technology at a frantic pace. By the end of June, China Mobile alone had erected more than half a million 5G basestations, spending nearly $8 billion on 5G in the first six months of the year (including 4G, older technologies and small cells, it boasts 5.28 million basestations in total). Using open RAN across that footprint would mean replacing products that still have years left to depreciate.

"In China, the current scale of the 5G network, aggregating the three operators, probably amounts to two-thirds of global 5G network scale," said Chih-Lin. "That means the rest of the world is still at a very early stage and I believe that O-RAN-related technologies that will be maturing in phases should be able to catch a significant part of global 5G development."

China Mobile has been secretive about its open RAN plans and does not even mention the technology in its recent investor report. But even the localized use of open RAN in such a huge country could help to generate scale, enthuse investors and cultivate a Chinese ecosystem.

On that front, an interesting and potentially significant development came this week with the release of new silicon products for small cells by Picocom, a private-equity backed company with offices in China and the UK. "The chip contains two sorts of processor: RISC-V (there are 32 cores) and Ceva XC12 vector processor cores," said Peter Claydon, Picocom's president, via a LinkedIn message. "There are also lots of hardware accelerators."

Some pundits fear the infiltration of open RAN by China and Chinese companies. John Strand, the CEO of Danish advisory group Strand Consult and an outspoken critic of China, draws attention to security concerns. "The problem with open RAN is compounded as many of its vendors have exposure to the People's Republic of China," he says in a new report. "Huawei is a lead developer in some of the open-source code used in open RAN."

An ongoing worry for the open RAN community is that several Chinese contributors to the O-RAN Alliance are now subject to US sanctions. China Telecom had its license to provide telecom services on US soil revoked in October, with FCC commissioner Brendan Carr saying that it "poses significant national security concerns due to its control and ownership by the Chinese government." Chip designers Phytium and New H3C Semiconductor Technologies have been named on the Entity List  a US trade blacklist  because of perceived links to the People's Liberation Army. The recent inclusion of H3C is a problem for American IT firm HPE, which partly owns the Chinese company.

Strand also reckons China Mobile has been one of the most active service providers inside the O-RAN Alliance, making 397 contributions last year alone. It spends far more on research and development than most operators in Western Europe, investing about $769 million in this area last year, a 72% increase on the 2019 figure. In addition, Strand thinks Huawei may be "influencing open RAN indirectly" through China Mobile, its largest customer.

Europe's biggest operators are anxious that a future open RAN ecosystem will be dominated by Asian and US suppliers. They have repeatedly urged European authorities to fund open RAN start-ups and trials, hoping this will produce local alternatives. The real battle may be over the next iteration of mobile technology. "Certainly, we believe 5G will be the system where O-RAN technology will have the greatest impact initially," said Chih-Lin. "But I also think that O-RAN will play a big role in 6G."