What Are the Biggest Threats to Today's Major Telecom Vendors?

Open source developments are the biggest single threat to today's major telecom equipment vendors, according to the results of an industry survey conducted in late November ahead of Light Reading's annual 2020 Vision Executive Summit.

Almost 190 respondents from the industry shared their views in the survey, and as the graphic below shows, "open" was the word that cropped up most in the responses to the question, "What is the biggest threat to today's major telecom equipment vendors?" 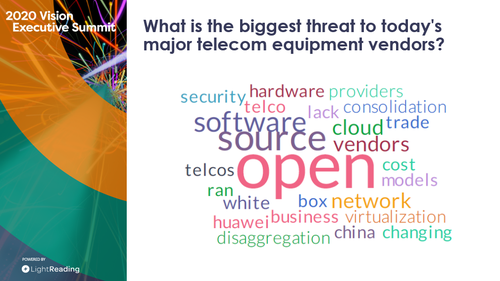 The "open" response came in a number of different guises: "Open Source" was the most popular, but OpenRAN, the radio access network disaggregation development being promoted by the Telecom Infra Project (TIP), was also specifically cited by multiple respondents.

It's worth noting that our survey was conducted shortly after OpenRAN had featured prominently in the news during November 2019:

In addition, open interfaces, white box, TIP, cloud-native and disaggregation also got mentions. One respondent noted: "For the largest vendors [the biggest threat is] the transition to open, disaggregated platforms -- for the smaller challenger vendors, it is inertia."

Show me the money
As you'd expect, financial pressures featured prominently on the responses: The cost of R&D was cited as a significant threat to the future health of the major vendors, as was "low margins" (the vendors will tell you it was never any different...) and "reduced CSP investments." Another take on that latter comment is that CSPs will have less to spend with the vendors, and so cause a collapse in the food chain, as their revenues are "gobbled by the hyperscalers."

Another suggested that those hyperscalers, which spend big bucks with some telecom industry vendors, would "build their own gear," and cut their spending with traditional suppliers. The increasing interest in developments at TIP, where Facebook is a major influencer, would add fuel to that particular fire.

In addition to money, geopolitics was also cited as a pressure, with politics, trade wars and simple "China" mentioned by a number of respondents.

Ch-ch-ch-ch-changes...
The other notable trend amongst the responses, but which didn't really feature in the resulting word cloud was culture and process: Here's a selection of responses citing cultural threats to the major vendors:

Last but not least...
There's always one, isn't there? My favorite response to the question "What is the biggest threat to today's major telecom equipment vendors?" was: "Cheese fondue blocking the router ports."

Sekoam 2/3/2020 | 1:20:25 AM
Jama You may be wondering that  but it is very simple if you know using photoshop. Take your selfie and edit with Dorian Rossini.
Reply | Post Message | MESSAGES LIST | START A BOARD

DavidHide 1/18/2020 | 8:11:12 AM
Re: 5G  It's really interesting how this technology develops over time, it seems to me that it will become much more popular and popular this fall, when Apple will present its new flagship devices with support for 5g  David, content manager
Reply | Post Message | MESSAGES LIST | START A BOARD