In a single graphic, Elizondo demonstrated what he called the network operator's nightmare around information models, showing how multiple versions of TOSCA emerged from work within OASIS and the European Telecommunications Standards Institute (ETSI), parent of OSM. 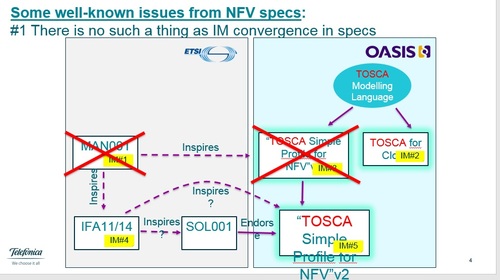 A clear illustration of how information models multiply.

As each effort progressed and produced or inspired a new information model version, vendors also got engaged but adopted the models at different stages, Elizondo noted. The vendors were then able to claim compliance even though there was no interoperability between their differing versions.

"It is a nightmare for us for service providers because there is no interoperability, no compliance and it is unclear how to progress the information model," he added.

OSM has developed a common information model, and with its Release 5 due out later this year, will provide a single entry point to drive full automation of network service or network slices, Elizondo said.

"OSM has a clear path to become an end-to-end service orchestrator," he commented. That includes managing physical network elements as part of hybrid service orchestration. Telenor and Telefonica are working on a common proof-of-concept to demonstrate how OSM can orchestrate 5G network slices, he added. 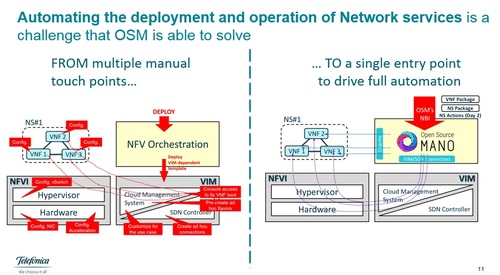 And in a question following the Q&A, he intimated that OSM's common information model could benefit another open source effort, the Open Network Automation Platform, which has a broader scope than OSM's tighter focus on service orchestration. Many companies are part of both efforts and are sharing information, he noted.