WASHINGTON -- The Federal Communications Commission -- The FCC voted 3-2 along party lines today to repeal the Open Internet Order passed in 2015 and replace it with the new Restoring Internet Freedom Order. The new order returns broadband service to its classification as a Title I information service, and removes so-called bright line rules that prohibit Internet service providers from blocking, throttling or giving preferential treatment to traffic through paid prioritization.

While the decision was expected, it also sparked an uproar from net neutrality proponents who believe the regulatory reversal is against the public interest and will lead to pay-for-play delivery of content on the web.

In arguing for the new order, Federal Communications Commission (FCC) Chairman Ajit Pai contended that the Internet doesn't need utility-style regulation, and that the imposition of the earlier Open Internet Order led to a decrease in broadband investment -- a conclusion that is much debated. (See The Title II Capex Argument Is Ridiculous.)

He also asserted that the Federal Trade Commission is the right agency to protect consumers from unfair and anti-competitive practices online, which it will once again be in a position to do now that ISPs are under Title I classification.

"Today, we are putting the nation's premier consumer protection cop back on the beat," says Pai. 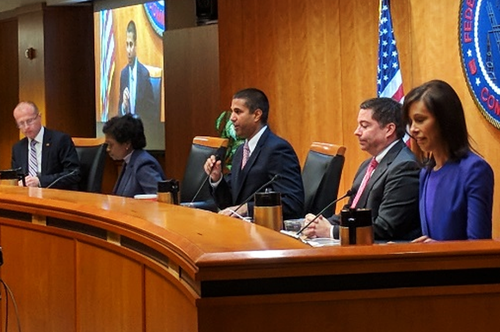 FCC Chairman Ajit Pai holds forth on the Order to Restore Internet Freedom among his fellow FCC commissioners.

However, Democratic commissioners at the FCC have expressed serious concern over the new order, charging that consumer voices are being ignored, and that in addition to problems with the order itself, the process for managing public comments has been mishandled.

Prior to the initial circulation of the Restoring Internet Freedom Order, industry observers had thought that the FCC under Chairman Pai would reverse Title II classification of ISPs, but perhaps leave the bright line net neutrality rules in place. Now some, including the principal analysts at MoffettNathanson LLC , speculate that Pai may have gotten rid of the bright line rules in order to pave the way for Congress to enact legislation that would bring them back while still leaving the Title I designation in place. This would create something of a good cop/bad cop scenario and could conceivably create a law that both sides could claim as a victory.

Such legislation is not what staunch net neutrality advocates are seeking, however, and it's not at all clear that Congress could come to consensus on a law in any case. (See Here's Pai in Your Eye.)

What's interesting about the net neutrality debate is the fact that politicians on both sides of the aisle recognize how much of a hot button issue it is with voters. Numerous Democrats condemned Chairman Pai's Restoring Internet Freedom Order when it was released, but several Republicans have also now expressed their concern in the face of backlash from constituents. Notably, US Representative Mike Coffman (R-CO) reportedly sent a letter to Pai this week requesting a delay of today's vote in order to let Congress review the issue. Both Senators from Maine -- Senator Angus King (I-ME) and Senator Susan Collins (R-ME) -- requested a cancellation of the vote in a last-minute plea to the Chairman today.

Meanwhile, net neutrality advocates are making their voices heard here on site at the FCC. Protesters rallied outside the FCC building early in the morning with speakers including Representative Keith Ellison (D-MN) and actress Amanda Seales of the HBO show Insecure. The general theme of the protests has centered on fears that the net neutrality repeal will threaten free speech and limit the distribution of public news, information and entertainment to established corporate interests. 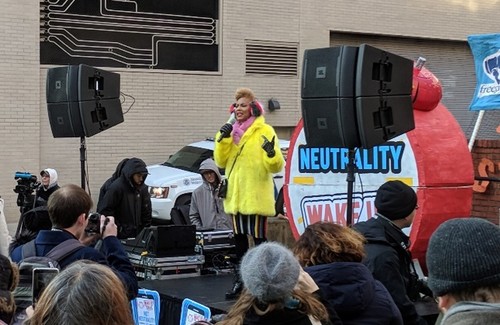 Actress Amanda Seales rallies a crowd of protesters outside the FCC.

Now that the Restoring Internet Freedom Order has passed, the next stop for the regulatory rule is likely the judicial system. The order will be challenged in court, and because the US Appeals Court of the DC Circuit upheld the Open Internet Order last year, there will have to be a compelling argument to suggest that something has changed since then to support a reversal. (See FCC Wins Key Net Neutrality Ruling.)

Phil_Britt 1/3/2018 | 4:34:35 PM
Re: Not dead yet The two political parties have moved so far apart (decades ago the complaint was they were too similar), there needs to be some semblance of balance so that there aren't wholesale rule changes every time the political timeds shift.
Reply | Post Message | MESSAGES LIST | START A BOARD

kq4ym 1/3/2018 | 4:27:36 PM
Re: Not dead yet It may very well be that after the courts have listened to argument on this one, there will be some modification  if one side makes complelling arugments, but that does seem unlikely at this time. But, who know what changes may take place in coming years if political loyalties change over time.
Reply | Post Message | MESSAGES LIST | START A BOARD

Section 706 of the Administrative Procedures Act commands the court to set aside an agency action that is "arbitrary, capricious, an abuse of discretion... short of statutory right... without observance of procedure required by law... unwarranted by the facts to the extent that the facts are subject to trial de novo by the reviewing court."

In my layman's understanding: an agency reverses itself, 3-2 along partisan lines, three years after a proceeding. The previous Order was upheld by the court. There is no real evidence that the facts have changed. The NPRM and the Order are politically charged. 22 Million public comments are dismissed. Comments from widely acknowledged experts, demonstrating that the NPRM is based on fundamental misunderstandings of the subject matter,  are dismisssed. The pretext of the reversal is based on two highly biased studies that are contradicted by the balance of the record. Comments debunking those studies are dismissed. The record is tainted by fraudulent comments that the agency refuses to investigate. The agency refuses to provide public records relevant to the proceeding, and refuses to place them in the record. No public hearings are held, in defiance of custom if not law. The Order, arguably, abrogates the responsibilites delegated to the agency by law. The Order preempts state laws and deprives the states of enforcement powers. The Chairman of the agency attempts in bizarre fashion to discredit critics in the court of public opinion. In a performance that he knows is likely to become public, he makes light of allegations that he is unduly influenced by a party to the proceeding.

Based on all of that:  am I wrong to doubt that the court can uphold this Order? What am I missing?
Reply | Post Message | MESSAGES LIST | START A BOARD

Phil_Britt 12/18/2017 | 9:37:51 PM
Re: Not dead yet Thought Merrill was more centrist. Gorsuch for Scalia probably not much of a difference, as you say. But it does seem that the right is moving much further right.
Reply | Post Message | MESSAGES LIST | START A BOARD

Joe Stanganelli 12/18/2017 | 9:30:52 PM
Re: Not dead yet Who's "they"? Roberts was from Bush 43 and a pretty moderate choice for a "conservative" justice. And the ACA decision was not the only thing he voted with the liberal wing on -- just, arguably, the most famous case.

Or do you just mean presently? Extreme or not, from a Republican president's standpoint, the choice of Gorsuch to replace Scalia is actually quite apt because Gorsuch's jurisprudence -- both in philosophy and in style -- is probably the closest among high-profile US judges and other legal academians. If you're a Republican/conservative president, Gorsuch is really the obvious choice, it seems to me.
Reply | Post Message | MESSAGES LIST | START A BOARD

Joe Stanganelli 12/18/2017 | 9:22:39 PM
Re: Not dead yet @daniel: I'm really struggling to see the legal argument that would compel the FCC to reverse itself here. The only leg liberal state AGs have to stand on here as far as I can tell (of course, I fully grant that I may be missing something because I have not followed this entirely closely) is the issue of fake comments. This is just silliness, however. As with just about every issue on which the public comments, I suspect, the Chairman has pointed out that it was the substance of comments and the legal issues they pointed out that had more to do with anything.

(And it's not like there weren't fake comments when Title-II regulation went into effect two years ago.)

Practically speaking, there's little to nothing a regulatory body can do to prevent fake and duplicate comments. It just so happens that this was an issue that lent itself particularly well to stirring them up and attracting them. Yes, federal systems should be secure, but this is a red herring. Net-neutrality proponents didn't get what they want and they are doing everything they can to stall or interfere with the rollback of the 2015 Order. I don't blame them for it, but it's still tax-dollar-wasting political silliness.

Even if the lawsuit winds up being successful, the Pai FCC will still eventually manage to keep broadband providers categorized under Title I or otherwise not-so-heavily regulated. There's always a way.

As for the state AGs threatening to sue, it's mere political posturing to take advantage of the electorate's whims. A lawyer colleague of mine with whom I once spoke on a panel put it thusly: "'AG' doesn't stand for 'Attorney General'; it stands for aspiring 'Aspiring Governor'."
Reply | Post Message | MESSAGES LIST | START A BOARD

Phil_Britt 12/18/2017 | 9:10:54 PM
Re: Not dead yet To be honest, I was shocked by the Roberts decision. But it seems that they are doing everything they can to stay away from nominees the least bit centrist.

Joe Stanganelli 12/18/2017 | 9:09:03 PM
Re: Not dead yet @Phil: True, but this is the theory behind lifetime appointments -- that, once appointed, executive-appointed members of the judiciary need not fear retaliation or other action one way or the other on the part of the executive.

Harry Blackmun is a perfect example of this. Blackmun was a Nixon appointee to the SCOTUS. Blackmun went on to author the Roe v. Wade decision -- to the chagrin of many a Republican.

Another good SCOTUS example who is more recent is David Souter. Souter was a Bush 41 appointee -- and was planted pretty very firmly in the liberal wing of the court throughout his tenure.

Yet more recent? John Roberts was appointed as our current Chief Justice of the Supreme Court by Bush 43. Roberts wound up being the last-minute switch vote that protected key provisions of Obamacare from being struck down as unconstitutional.

Of course, the better justices switch to "other side" here and there. Even Scalia, who had a reputation as a hardline conservative justice, was an equally hardline protector of accused suspect's 4th-, 5th-, and 6th Amendment rights -- something that tough-on-crime all-the-way conservatives may not be particularly fond of.
Reply | Post Message | MESSAGES LIST | START A BOARD

This is the case with most major regulatory overhauls -- one way or the other.

Well, some lawyers... My practice has yet to see any windfall from this. ;)
Reply | Post Message | MESSAGES LIST | START A BOARD