There are many things that can cause one to toss their cookies -- too much booze, spoiled fish, the flu, riding a rickety roller coaster with a tummy full of hot dogs and cotton candy.

"When I go to one of our towers, I want to throw up," Charlie Ergen, Dish Network's chairman, said on Friday's Q1 earnings call. "We're building something that we know is... technically obsolete... The architecture has to change for a wireless network."

At this point in time, the nb-IoT network Dish is building is based on traditional means, with receivers and baseband processors and so forth. But the longer-term aim of the company, heading into 2020 and beyond and its eventual pursuit of a grander, standalone 5G network, is to develop and deploy a virtualized network that can reduce costs, cut down requirements for tower "sheds" filled with cables, wires, baseband processing and powering, and enable advancements like network slicing. And, as a bonus, settle Ergen's stomach.

"We're going to take that shed and put it in the cloud," Ergen said, noting that the plan is to not only do mobile phone service, but to tap into the "power of 5G" and support robotics, smart cities, smart agriculture and other forms of business. "You can't do that with an existing network today."

Dish's plan in this area has been linked to the success (or failure) of Rakuten, the Japanese e-commerce company that aims to disrupt the mobile market there with a software-driven, virtualized network.

Ergen talked up Rakuten and the tech partners it has assembled for the effort on today's call, calling what has been achieved there in the last eight months "unbelievable."

"That architecture... is starting to gain credibility," he said. "We're in position to build a virtualized network from the ground up... In our case, we don't have any [mobile/wireless] customers, so we can build it right the first time."

Still, skeptics on the call noted that what Rakuten is trying to accomplish and the complexities involved make it far from a slam dunk. Ergen agreed, to a point.

"I don't think they have to be a wild success, but they do need to make breakthroughs in technology and software," he said, still confident that they'll pull it off and those results will greatly benefit Dish.

In the meantime, Ergen said Dish is confident it will meet the FCC build requirement deadlines for its nb-IoT network and that the initial IoT use-case will also fulfill regulatory requirements. On that note, he said AT&T's recent launch of a national nb-IoT network bode well for Dish.

He also reiterated that Dish does not need to raise more capital for its nb-IoT network, but that the company could pursue avenues to help cover the estimated $10 billion needed to cover the phase II, 5G piece, which is still years out. That financial help "could come in a number of forms," including partnerships, Ergen said.

Ergen also sidestepped continued speculation that Dish might try to sell its spectrum holdings, given the rising demand and value of mid-band spectrum. He stressed that Dish remains committed to the build plan.

"You've never heard me say we're going to sell spectrum. But we want to be disruptive... I really believe this company can make a difference," he said. And if Dish were somehow forced to liquidate spectrum in fairness to shareholders or because of an untenable regulatory environment, Ergen would see it as a "personal failure."

"We are well positioned in the mid-band spectrum and low-band spectrum to build a 5G network," Ergen said earlier in the call, pointing out that it's evident that millimeter wave will continue to be challenged in the short-term.

Video losses continue to mount
Mobile, wireless and 5G may represent the future for Dish, but its legacy business, pay-TV, continues to struggle mightily.

Dish lost a total of 259,000 video subs in Q1 -- 266,000 satellite TV losses against just 7,000 sub adds for Sling TV, its OTT-TV service. That gives Dish a grand total of 9.63 million satellite TV subs and 2.42 million Sling TV customers. Dish's satellite TV base is now shrinking at an annual rate of 11.2%, according to MoffettNathanson. 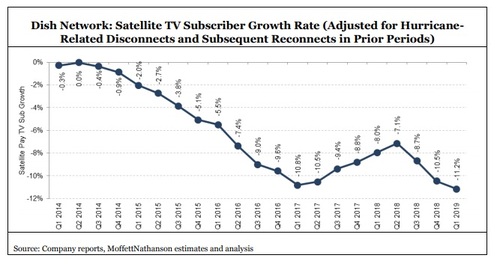 Satellite losses weren't as bad as the expected 288,000, but Sling TV gains fell well short of the expected 46,000. Average revenues at Dish were up thanks to recent price increases, while Sling TV saw some help come in the form of subs taking higher-priced packages, taking programming add-ons, ad sales and a greater number of customers adding Sling TV's cloud DVR service.

Dish said about half of the sub losses in the quarter can be attributed to a carriage dispute with Univision, which was resolved in March, and the ongoing one with AT&T/HBO.

On the call, Ergen was asked if he would entertain the idea of selling Dish's declining pay-TV business.

"We think video makes sense," Ergen said, noting that pay-TV will be one of the biggest users of the mobile network. He pointed out that this is what helped drive T-Mobile's acquisition of Layer3 TV. At the same time, he acknowledged that video is not as important to Dish's business as it might have been two or three years ago and that the general linear TV business must change to survive.

When pressed by BTIG analyst Walter Piecyk on the suggestion to sell off Dish's pay-TV business, Ergen joked: "Send us your recommendation... We take a look at everything."