BARCELONA -- MWC19 -- On the Telecom Infra Project's third birthday, Deutsche Telekom's Axel Clauberg says the collaborative group is celebrating the move of mobile network technologies out of the research phase and into the production stage.

"The areas where we invested in the first three years are coming to market now and reaching broader adoption in the industry -- that's what you see in mmWave the industry saw there's real value in taking a spec developed out of a TIP project group and productizing it," Axel Clauberg, vice president of Infrastructure Cloud & IP End to End at Deutsche Telekom AG, Group Headquarters told Light Reading after Facebook's TIP press conference today. 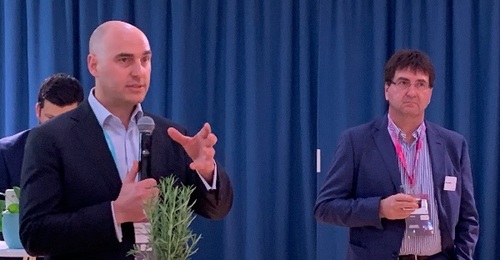 Since issuing requests For information (RFIs) at the TIP Summit last October, Vodafone and Telefonica now are initiating OpenRAN field trials, having used the RFI to identify Altiostar, Mavenir and Parallel Wireless as collaborators. Vodafone selected Turkey as the first of 25 planned OpenRAN trial deployment sites and will carry "commercial traffic over a parallel wireless 2G+4G macro site in the 900Mhz band," wrote Zani. Vodafone also plans future trials in Africa with Vodacom Group, Mavenir and Parallel Wireless, and will test Mavenir's small base stations indoors for 5G in urban areas.

Telefonica intends to launch OpenRAN trials in Peru, Colombia and Argentina in collaboration with Parallel Wireless and Altiostar.

"We're moving not just one set of RFIs with OpenRAN, but now multiple RFIs with cell site gateway, showing operators are moving down that path quickly," Aaron Bernstein, director of Connectivity Ecosystem Programs at Facebook, told Light Reading. "We're also showing how these different TIP project solutions can be stitched together in an end-to-end project demo."

ADVA Edgecore, IP Infusion and Infinera plan to adopt DCSG specs, and are demonstrating the first DCSG prototypes at MWC.

Next month, DT is expected to reveal the results of its RFI for 60 GHz mmWave solutions to the TIP community. Also, Malaysia's YTL Communications announced this week plans to investigate TIP-supported mmWave technologies for the last-mile of its network. mmWave project group members also founded the Wi-Fi Alliance program to focus on certification of Fixed Wireless equipment.

"This speaks to how there are a lot of different areas of technology within TIP and why it's important for the industry to work together," said Facebook's Bernstein. "Initially creating the ideas, moving to spec definition, then procurement, deployment and ultimately deployment at scale. OpenRAN is in the deployment stage with Vodafone in Turkey, and WiFi and 5GNR are in the formation stage."

DT and Facebook are co-chairing the newly minted WiFi Project Group to support collaboration and standardization among vendors and operators deploying WiFi.

"This is another opportunity where new business models should be shared in the broader community with more people collaborating," said Clauberg. "Open collaboration in organizations like TIP and in O-RAN is becoming more important to drive innovation in the industry it's important for us as operators to work with startups, established vendors as well as Internet companies, to advance the industry overall."

This open collaboration model is central to TIP's mission.

The fourth annual TIP Summit will be held on October 8-9, 2019 at ExCeL Centre, London.