AMSTERDAM -- TIP Summit 2019 -- With commercial products that conform to its requirements now available for network operators to purchase and deploy, the Telecom Infra Project (TIP) has opened an online marketplace, the TIP Exchange, to help its members highlight their products to prospective customers.

And based on the activity here in Amsterdam, the number of prospective customers, and the business opportunities they might offer, looks set to soar.

That's because, after years of talk about disaggregated and more open network technology that helps operators break free from vendor lock-in, there are real-world examples of commercial deployments by big names such as Telefónica, Vodafone and MTN, and significant efforts by other telcos towards embracing the models espoused by the likes of TIP: The era of white box wide-area networking looks to be well and truly underway.

That's good news for vendors such as Parallel Wireless, IP Infusion, Volta Networks, Edgecore Networks and an increasing number of others that are plowing their efforts into hardware and software that enable network operators to build their networks as if they were made of Lego pieces, choosing the blocks they like best and being able to swap them in and out in a way not currently possible.

But many of these vendors are relatively small and have limited resources to shout as loudly as their traditional, legacy vendor rivals about their products and capabilities. To help those companies expose their TIP-related products, the TIP Exchange has been launched, enabling vendors and systems integrators to pitch their wares and network operators to check out the qualified technology and professional services options.

While there is no fee to be added to the Exchange, to qualify for such exposure a vendor must be a TIP member (not free) and it must have qualified for one of the TIP "badges" displayed on Exchange entries: Those badges give an indication of whether the Exchange member has been involved in a field trial, successfully completed a "plugfest," conforms to a recognized TIP blueprint or has engaged in a TIP Community Lab. Anyone can set up an account and browse through the options, so we can expect a lot of vendors to be checking out each others' badges and marketing messages in the near future

The Exchange, of course, also gives TIP the chance to show the increasing level of support for its endeavors: Hundreds of vendors have joined as members and increasing numbers of operators are considering TIP options in their 5G strategies. Here at the show, Rakuten Mobile announced it is joining TIP and will contribute to working groups on work it has undertaken as it builds out its open networking 4G/5G infrastructure.

But it's not only the communications service providers of the world who are expected to browse the TIP technology options on display: Enterprises are starting to explore new private network opportunities, especially as regulators such as the UK's Ofcom start to offer up dedicated spectrum for such deployments, and open, software-oriented white box networking looks like a good fit for such deployments. Ofcom CTO Mansoor Hanif noted during a keynote address here just selling to telcos is a limited opportunity for small vendors in particular -- by offering spectrum to enterprises, Ofcom "expects to create a whole new customer base of hundreds, if not thousands" for developers of communications network technology. 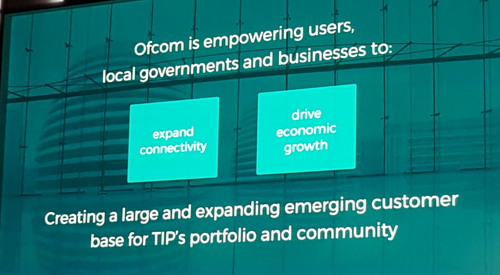 Ofcom sees a synergy between its private networks strategy and TIP's efforts.

Currently there are 28 vendors listed on the TIP Exchange promoting a total of 45 products -- as TIP technology finds its way into live networks and operators and enterprises gain confidence that the technology is fit for purpose, that number is certain to grow. Then, of course, those vendors will need to deliver on their promises  if they don't, it'll not only reflect badly on them but on the TIP organization too.