While the winners and losers of the battle over the coveted C-Band are yet to be determined as the FCC continues to weigh the options, one proposal being made by a group with some cable industry backing could be a boon for the nation's fiber network and data center providers.

A joint proposal filed by ACA Connects (formerly the American Cable Association), Charter Communications and the Competitive Carriers Association aims to free up at least 370MHz of C-Band spectrum for use by next-gen 5G networks, nearly twice the 200MHz that's been proposed by another group, the C-Band Alliance.

Flipping to fiber
The cable-backed group proposes an FCC-led auction (which may include an incentive auction) that would also involve programmers and multichannel video programming distributors (MVPDs) switching from C-Band to fiber delivery, while still allowing satellite operators to serve non-MVPD customers with the remaining C-Band spectrum.

The initial phase of the deployment model would tap into 42 existing data centers across the US to transport video content from uplink stations. 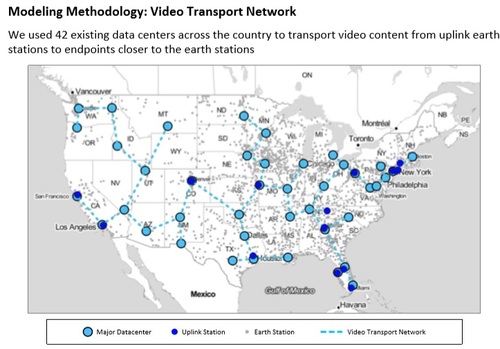 The group notes that the MVPD programming-related services occupy about 70% of the C-Band today, and that an alternative delivery platform, using fiber, will help to free up a large portion of the band. The ACA Connects-commissioned study, conducted by Cartesian, concludes that 130MHz is more than enough spectrum to satisfy the needs of non-MVPD services using the C-Band, leaving about 370MHz free to reallocate for 5G.

Citing the same study, the group believes that the spectrum being targeted could be cleared in all urban markets (including those tagged for the first wave of 5G deployments) in about 18 months, while others could take three years and as many as five years in more rural regions of the US where "fiber deployment is harder."

The Cartesian study also anticipates that the resulting fiber build in rural areas could help providers develop 5G backhaul, boost Internet reliability, increase broadband speeds and reach underserved households. In addition to these rural fiber deployment benefits, the proposal envisions up to $29 billion in financial benefits and the creation of more than 200,000 jobs.

The proposal also aims to reimburse various parties that would be impacted by these changes.

For example, programmers and MVPDs would be reimbursed for the costs to purchase or build fiber and switch to terrestrial fiber-based networks, while satellite operators and non-MVPD C-Band users would be reimbursed for the costs similar to those being proposed under the CBA-led plan. Reimbursements to satellite operators would include about $240 million annually for two years for lost revenues from programmers after the MVPDs complete the transition to fiber in year five of the plan.

Programmers would also be reimbursed an average of $40 million per year for the purchase of equipment to deliver programming on fiber across as many as 50 data centers for five years.

Further, the study estimates total costs of $9.2 billion to $11 billion to clear the 370MHz of spectrum being targeted. It sees these costs being covered by forthcoming C-Band auction proceeds, which are anticipated to be in the range of $30 billion to $37 billion that "conservatively assumes $0.25 - $0.30/MHz/PoP." Although the incentive payments tied into the model are still to be determined, the study sees some $29 billion flowing to the US Treasury as a result.

FiOS was doing about $1500 per home connected - which is WILDLY optimistic for rural folks.  So we have a buildout cpsting $22.8B (and that is highly optimistic) to something nort of $50B with realistic numbers.