From X to Zzzzz: Apple's iPhone 11 faces an uphill struggle

Twenty or so years from now, when other gadgets have replaced the smartphone and "immersive" technology is ubiquitous, today's fascination with the handheld device may seem as quaint as an interest in vinyl records or paperback fiction. The outpouring of fanboy enthusiasm that attends the launch of a new iPhone will look as embarrassing as Beatlemania or John McEnroe's thigh-revealing shorts.

It already appears strange. Apple sent a seismic shockwave through the industry when it stormed into the market with its first iPhone 12 years ago. Touch screens were not new, but no one had featured them in such an exquisitely designed, data-enabled gadget. The late Steve Jobs, Apple's founding father, deserves credit for spotting an opportunity the old timers had missed, and for his unshakeable conviction that elegant simplicity would triumph. Since then, every handset maker from Sunnyvale to Shenzhen has been cranking out the same form factor. And Apple has fallen off its perch.

Applemania, and other embarrassing moments.

None of this seems likely to change with today's release of the iPhone 11, which marks a return to the conventional numbering system dropped for the iPhone X, Apple's previous smartphone, in late 2017. Under Jobs, Apple used to charge a premium for high-performing breakthrough gadgets, from the computers favored by graphic designers to the music-playing iPods and original iPhones. A barren spell for hardware innovation has altered its approach in the era of Tim Cook, Jobs' successor as CEO. As the iPhone X proved, the device strategy these days is more akin to that of an old-fashioned phone company: Make some barely perceptible changes and slap a new model number on the gadget.

The price premium has not disappeared, though. Quite the opposite, in fact. During its fiscal third quarter in 2016, Apple made less than $600 in revenues for every iPhone it sold. By the final quarter of 2018, after some peaks and troughs, it was generating nearly $800 per device. Spotting a deep gully in device shipments ahead, it cynically stopped publishing those details this year, preventing analysts and reporters from easily calculating per-device revenues. But total iPhone sales for the first nine months were 15% lower than a year earlier. Because the iPhone is Apple's biggest revenue generator, overall sales dipped. 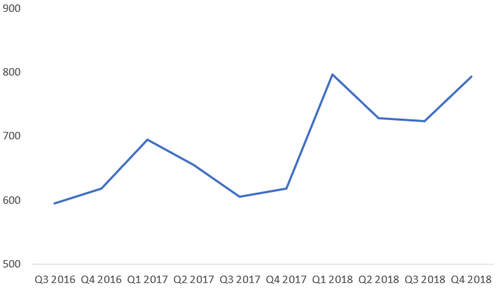 Apple is not the only handset maker that has run into problems. Research companies say the overall market -- in terms of unit shipments -- is shrinking as consumers cling to ageing smartphones. Many people, it seems, have no interest in buying an iPhone X when their iPhone 8 (the 9 was skipped like an unlucky number) is almost as good. Outside fanboy circles, consumer device experts think similar apathy will greet the iPhone 11. CNET, a highly respected website with a focus on mobile devices, reckons Apple "will unveil phones with essentially the same design for the third year in a row." Neil Mawston, an analyst at Strategy Analytics, is quoted saying: "Apple iPhone is struggling at the moment, and this year's upcoming new models are unlikely to change that."

Competition from rivals once derided as imitators is also biting into Apple. In July, Huawei reported a 24% increase in smartphone shipments, and 23% growth in overall revenues, despite the best sabotage efforts of US authorities, which accuse the Chinese vendor of being in cahoots with Chinese government spies. According to some reviewers, Huawei's top-of-the-range smartphones beat the latest iPhones on image quality, battery life and even design features. Jobs must be turning in his grave.

Not all is rotten at Apple's core. Despite the dip in overall sales for the first nine months, revenues from the important services area rose 16% and now account for 17% of the total, up from 14% a year earlier. Apple is also becoming less dependent on iPhone sales, which made up 56% of revenues for the first nine months, down from 63% a year earlier. As Apple steps outside its "walled garden," and develops more services that work on other manufacturers' gadgets, it may have the opportunity to morph into a mainly software and services company.

In the meantime, attention will turn to the iPhone 12, and whether this will support the latest 5G mobile technology. Apple watchers will be stunned if 5G is included in the iPhone 11. But if a 5G-compatible follow-up appears as soon as next year, when 5G networks should be more widely available, consumers may feel even less compulsion to upgrade now. If that is so, the iPhone 11 could be one of Apple's most lackluster launches of all time.