Passive aggressive
Broadly speaking, mobile-only players want two things from Europe's fixed-line incumbents. First and foremost, they are demanding access to the ducts and poles that companies such as the UK's BT Group plc (NYSE: BT; London: BTA) and Germany's Deutsche Telekom AG (NYSE: DT) control. If Vodafone could use this "passive" infrastructure, it would be able to make investments in its own fiber networks, it argues. In the absence of a regulatory framework that supports opening up ducts and poles, mobile operators would also like to use incumbents' dark fiber. Another "passive" network product, this promises more control over connections than operators enjoy with traditional "leased line" wholesale services.

Yet in both the UK and Germany, neither ducts and poles nor dark fiber networks are available to mobile operators for backhaul-only purposes. In the UK, that may not be for lack of regulatory ambition. Through a process of market reviews, regulatory authority Ofcom has been trying to find ways to open up the networks owned by BT's Openreach infrastructure division. But its efforts have been "cack-handed," says Barney Lane, the director of UK regulatory affairs for Colt, a rival to BT in the market for mobile backhaul services. 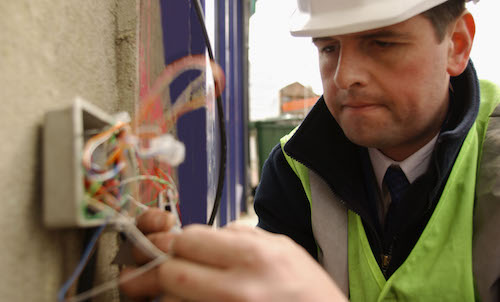 Gaining access to BT's network facilities remains a challenge for rivals such as Colt and Vodafone.

Colt's frustration is understandable. Under Ofcom's rules, an operator can access BT's ducts and poles only if its primary goal is broadband rollout for residential customers. In other words, if the provision of a business service like mobile backhaul is an adjunct to a residential deployment of fiber-to-the-home (FTTH) networks, Openreach's ducts and poles can be used. But if mobile backhaul is the main project, they cannot.

The rules, which effectively bar Colt Technology Services Group Ltd from using BT's facilities, relate partly to the legal distinction that Ofcom has drawn between the residential and business sectors in its market reviews. Instead of examining those markets together, it has set out to regulate each on a standalone basis and avoid taking any decisions about one that would have an impact on the other.

Pricing concerns have also compelled it to maintain a rigorous separation between the residential and business sectors. The pricing methodology for access to BT's ducts is incompatible with the pricing of BT's business services -- or so Ofcom has argued. "They are basically saying they are using different methodologies for pricing business and residential services, and that if you apply one to the other it would cause the whole methodology for that to collapse," says Colt's Lane.

Yet while Lane does not dispute the inherent logic of this position, he says Ofcom has been "quite transparently wrong" in its approach. Colt has fruitlessly urged Ofcom to adopt an alternative methodology and assess the business and residential markets simultaneously. "There is always an alternative cost methodology they could use but they just haven't ever done it," he says. "The French have had duct access for business use since 2006."

As an operator losing out under Ofcom's rules, Colt is hardly an impartial observer. But the EC, which oversees the market reviews carried out by Europe's national regulatory authorities, also takes issue with Ofcom's approach and recommends the same remedy as Colt.

In a clause in Ofcom's business connectivity market review, to which an Ofcom spokesperson directed Light Reading, the UK regulator acknowledges that: "The Commission did not share Ofcom's view that imposing universal duct access would create undue implementation risks (related to correct price differentials along the value chain). The Commission considered that the risks could be mitigated by the use of a uniform costing methodology with consistent asset valuation along the value chain."

Nevertheless, Ofcom is eyeing an alternative solution in the business sector. Instead of opening up BT's ducts and poles, it has been leaning on the incumbent to provide dark fiber services to the likes of Colt and Vodafone. It ran into a major obstacle in July, however, when a UK court ruled that Ofcom had erred in its definition of the market, following a BT appeal. To the incumbent's evident delight, Ofcom is back at square one.

A remittal hearing could leave Ofcom with less flexibility to move ahead. In the meantime, BT's rivals face prolonged uncertainty. "We are disappointed by the recent ruling overturning Ofcom's decision to require BT to provide dark fiber on a regulated pricing basis from October 2017," said a 3 spokesperson. "It seems likely that Openreach, the only provider able to supply dark fiber on nationwide basis, will not provide a dark fiber product in October 2017, either on a regulated basis or voluntarily."

Circumstances are just as unfavorable in Germany, according to Lane, albeit for different reasons. "Ofcom has essentially been hoodwinked by BT's economic arguments on pricing. In Germany it is more about procedural accuracy," he says. Wary of blurring the boundaries separating one telecom market from another, and thereby falling foul of the EC, the German regulator has failed to bring about any improvement in conditions for Deutsche Telekom's rivals, argues Lane. "It has taken a rigidly timid line against the incumbent because it is afraid of crossing a legal Rubicon," he says. (See Vodafone Calls for Broadband Regulation Shake-Up in Germany.)

Ultimately, the situation is the same as in the UK. While the German regulator did not respond to Light Reading when asked for a status update on the relevant rules, there has been no substantive change since 2014. "The Germans will not open up Deutsche Telekom's infrastructure for business operators to use, and so Colt can't use it," says Lane.