Filled with concerns and doubts that AT&T can achieve its new financial guidance in the coming years as video and other parts of its business struggle, MoffettNathanson has downgraded the stock to "Sell" while retaining a target price of $30 per share.

In a report issued Tuesday, analyst Craig Moffett outlined the reasons for his doubts, holding that growth at AT&T's mobile business will have a difficult, if not impossible, time making up the difference as other units of AT&T, including its Entertainment Group and wireline business service unit, struggle. 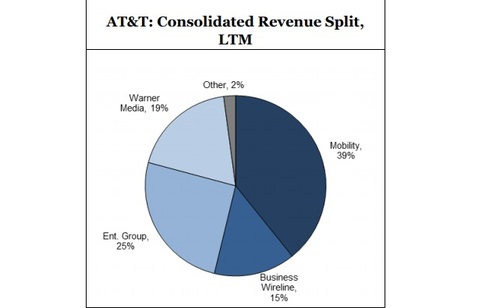 Moffett is skeptical that AT&T's mobile unit will be able to grow fast enough to make up for deficiencies at other parts of its business.
Note: Revenue contributions are shown before inter-company eliminations.

"On the surface, the numbers don't sound challenging, especially the forecast of 1%-plus revenue growth. But the more we poke at our estimates, the harder it is for us to imagine they can be achieved," Moffett wrote.

Given his downgrade from "Neutral" to "Sell," it's pretty clear he isn't supremely confident that AT&T can pull it off. Notably, he's highly skeptical that wireless will be able to provide the heavy lifting required to make up for weakness and challenges in other parts of AT&T's business.

AT&T's Entertainment Group, he points out, will start 2020 with at least 15% fewer subs than at the start of 2019, thanks to massive, pay-TV subscriber losses recently. Although AT&T believes that the worst of those losses is over, no one expects that part of the business to return to growth. Meanwhile, AT&T's broadband business is also in decline despite some subscriber growth from its fiber-to-the-premises platform.

"The Entertainment Group, in short, is a cancer," Moffett proclaimed.

The picture also isn't pretty at AT&T's business wireline unit, which is shrinking by about 4% and wrestling with contracting margins. Not helping matters is pricing pressure being applied by cable in the small and medium business segment and, to a lesser extent, in the enterprise sector. Software-defined networking in client networks is also putting more downward pressure on pricing, Moffett points out.

WarnerMedia's results, meanwhile, will be diluted by costs for HBO Max, its new subscription OTT service set to debut in May 2020, while its Turner unit is faced with the prospect of declining affiliate fees as the US pay-TV sub base continues to erode.

The onus is on mobile and wireless
So, the big question, Moffett says, is whether wireless, which today represents just 40% of AT&T's revenues, can make up the difference by growing roughly ten times faster in 2020 than it has in 2019, and do so in a market that is increasingly competitive?

AT&T Mobility, he said, will need to deliver about 8% revenue growth, a huge acceleration from Q3's -0.2%. "And the hill only gets steeper after 2020," Moffett added. "We believe it's highly unlikely that Mobility revenue growth could accelerate so much and so suddenly."

Moffett's downgrade also arrives on the scene as AT&T is pressured by activist shareholder Elliott Management to overhaul the carrier's front-office management and to explore divesting DirecTV, the satellite TV company that AT&T acquired four years ago for $49 billion.

AT&T has been clear that DirecTV isn't for sale, in part because it brings in a lot of cash and will play a big role in the company's advanced advertising initiatives. But just this week AT&T did show that it is willing to unload non-strategic assets -- it's selling its stake in Game Show Network LLC for $500 million to Sony Pictures Entertainment.