If the transactions are approved by the FCC, the nation's spectrum regulator, they will give Verizon more spectrum for its mmWave 5G network in locations in Florida, Alabama, Virginia and elsewhere, and more midband AWS-3 spectrum for either LTE or 5G in select locations around the country.

"Verizon plans to deploy a commercial 5G mobile network on this and other UMFUS spectrum to provide mobile broadband 5G service using 5G capable smartphones, mobile WiFi hotspots, and other devices as they become available," Verizon wrote of its transaction with Sunshine LMDS Network for its 28GHz mmWave spectrum licenses. "Approval of this transaction will facilitate Verizon's continued investment, innovation, and deployment of 5G technology that will benefit the U.S. economy and the millions of consumers, businesses, and government users that increasingly rely on wireless broadband and soon, 5G."

The operator made similar comments of its pending purchase of mmWave licenses from Virginia Tech Foundation.

In its filings with the FCC, Verizon didn't disclose its plans for the AWS-3 licenses that it's hoping to purchase from Blue Ridge Wireless, but the operator's existing 4G LTE network relies heavily on AWS-3. However, Verizon has hinted that, over time, it plans to eventually deploy 5G across all of its spectrum holdings.

Why this matters
Verizon has made no secret of its desire for more spectrum. Despite the fact that Verizon counts more wireless customers than any other US wireless network operator, its overall spectrum holdings are either equal to or below those of its rivals. 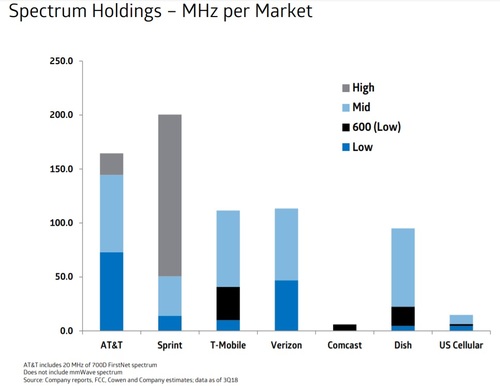 Verizon executives continue to argue the company is comfortable with its spectrum position, despite rising user traffic on its network. However, Verizon has loudly asked the FCC to release more spectrum for 5G, including valuable midband spectrum like the C-Band.

Moreover, Verizon is working to buttress its network while it waits for the FCC to release more spectrum, in part by making use of unlicensed spectrum, including the 5GHz band and the recently freed 3.5GHz CBRS band.