5G-powered fixed wireless broadband is being billed as a potential disruptor to cable operators and other in-home wireline service providers, but a new analysis of Verizon's 5G Home rollout in Sacramento suggests that the company faces a "steep climb" to scale the offering and generate an acceptable return on the investment.

"Our findings in Sacramento -- limited coverage, low penetration -- preliminary though they may be, suggest that earning an attractive return will be challenging, at best," Craig Moffett, analyst with MoffettNathanson, wrote in a lengthy analysis of Verizon's 5G Home rollout there.

He allowed that these are "very early days" and that a new network doesn't "prove out in a matter of months," but likewise found the early findings eye-opening. Here's a breakdown of some key points from MoffettNathanson's study:

For its self-described "proprietary deep dive" into Verizon's 5G Home rollout in Sacramento, MoffettNathanson sampled nearly 45,000 Sacramento addresses (out of about 70,000) within a 0.7 mile radius around 5G small cells located within seven zip codes. 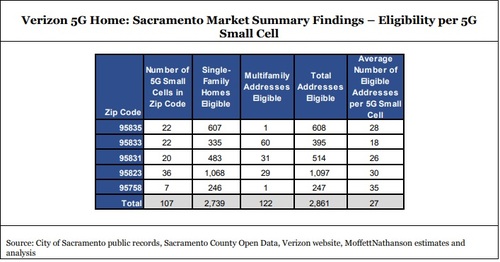 "To us, the most interesting statistic isn't so much the low take rate as it is the relatively low coverage, as it illustrates the enormity of the challenge of scaling a small network, in neighborhood after neighborhood, across the United States," Moffett wrote.

By way of comparison, a recent study by Earl Lum of EJL Wireless Research observed that about 10% of Sacramento had access to Verizon's 5G Home, and that the company's 5G transmitters were attached to streetlights. (See Analyst Maps Verizon 5G in Sacramento, Finds 'Pretty Sparse' Coverage.)

Economics trump technology
The core questions about 5G Home, MoffettNathanson argues, are not the technology or the physics of millimeter wave spectrum, but the broader economics and if Verizon stands to achieve a "passable return" on capital.

And even if fixed wireless broadband is less expensive than FTTP to construct, the total cost per connected home could actually be more if the penetration rate for the new wireless service is not comparably high.

The report notes that the cost of the drop for fixed wireless broadband (it could dip to about $200) is lower than it is for an FTTP network (about $700), but the "passing cost" is about the same. The difference maker, Moffett said, is the number of homes that are eligible for service and the ultimate take rate. The low penetration rate Verizon has seen thus far for 5G Home in Sacramento isn't nearly enough to achieve economics that are better than a typical FTTP network example, the report found.

"Our analysis suggests that costs will likely be much higher (that is, cell radii appear smaller) and penetration rates lower than initially expected," the report explained. "If those patterns are indicative of what is to come in a broader rollout, it would mean a much higher cost per connected home, and therefore much lower returns on capital, than what might have been expected from Verizon's advance billing."

The report also analyzed the effectiveness of Verizon's use of millimeter wave spectrum for 5G Home (Verizon is using 28GHz in Sacramento) and the useful radius of the small cells.

While no single number can capture the propagation distance of a small cell due to multiple variables, MoffettNathanson says its admittedly oversimplified estimate is that each cell site serves an effective radius of about 700 feet. The study also points out that Verizon has said the company has seen distances of up to 1,900 feet, but likewise noted that the percentage of homes within that distance is the number that matters. 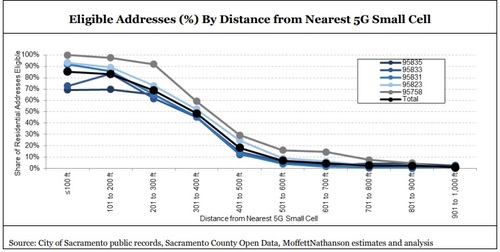 MoffettNathanson's study is based only on an analysis of 5G Home in Sacramento. Verizon is also trying it out -- in different topologies and foliage levels -- in Houston, Indianapolis and Los Angeles, so it's possible that Verizon could be seeing better (or worse) results in those markets.

The analysts conclude that it's of course possible that Verizon will be able to roll out 5G Home to about 25% of the country, or some 30 million homes -- as it guided to earlier -- with this architecture."But it will take a very, very long time. And it will cost a great deal of money," the report concludes.

"We don't have the numbers to do it, and making up some numbers and then multiplying them and dividing them by each other wouldn't help our analysis. Instead, we have hewed to the numbers we do have. We suspect they are enough to make the answers relatively clear," he wrote.

However, a colleague pointed out to me that New Street Research estimated early last year that VZ could shell out as much as $35B in capex to deploy the 5G fixed wireless offering to 32 million US homes, and it could take 7 years to do it.

The MoffettNathanson report also keeps in mind that there's speculation that VZ could also use mid-band spectrum for this too thought it's not clear if it makes dollars and sense for them to use this kind of spectrum for that use-case given that home broadband connections generate about 1/20th as much revenue per GB as a wireless connection. JB

daveburstein 3/20/2019 | 1:09:07 PM
Actually, CEO has said "Whole country" Moffett's analysis is extraordinary and your writeup catches it well. But one data point to add. CEO Vestberg has said "whole country by about 2027." 25% the first few years and the rest after that when he expects prices of hardware to come down.
Reply | Post Message | MESSAGES LIST | START A BOARD
EDUCATIONAL RESOURCES