IHS Markit's RootMetrics today released what are the first big, public, comprehensive and independent tests of 5G networks in the US by a major wireless network testing company. The results reinforce the fact that it's still early days for 5G in the US, and that 5G coverage and performance is uneven -- to put it mildly.

RootMetrics -- which is not owned by Informa, Light Reading's parent company -- tested 5G networks from all the major wireless networks operators in Atlanta, Chicago and Dallas. The study used multiple devices (the LG V50 ThinQ 5G and the Samsung Galaxy S10 5G), covered hundreds of miles of urban and suburban territory in each city (including some indoor locations), and featured results from Verizon, AT&T, T-Mobile and Sprint across 3G, 4G and 5G, where available. The testing company also compared its US testing results with similar tests it has conducted in other countries that also offer 5G, such as South Korea.

So what are the findings? Well, 5G is fast. At least, when it's coming from Verizon: 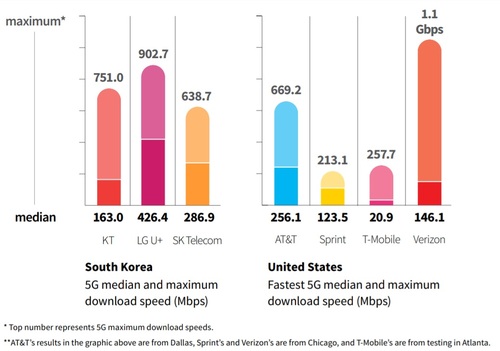 Verizon leads the pack, but South Korea leads the space.

However, the firm noted that the US lags dramatically behind South Korea when it comes to actually finding a 5G signal.

"US 5G deployments are in their infancy compared to those in South Korea," the firm noted, adding that the "availability" of 5G -- meaning, the amount of territory covered by the service -- is minimal in the US when compared with South Korea. "In South Korea, the 5G availability rates for each operator ranged from 42.2% to 45.6%. In the US, Sprint was the only carrier with a 5G availability rate above 24.9% in any of the three cities we tested, and Sprint's 5G rates were at least that high in all three markets, topping out at 51.4% in Atlanta. AT&T, Sprint and T-Mobile, however, each had 5G availability rates below 7.2%."

For example, the firm noted it was only able to connect to AT&T's 5G network in Dallas 2.6% of the time. For T-Mobile that figure was just 1.3%.

To anyone following the rollout of 5G in the US, this should come as no surprise. South Korean operators are mostly using the 3.5GHz band for 5G, which is often described as "Goldilocks" spectrum and offers a good balance between carrying lots of data and covering lots of geography. In the US, however, Verizon, AT&T and T-Mobile are all using millimeter-wave (mmWave) spectrum, which can carry a lot of data but cannot cover large geographic areas. That's just due to the physics of radio waves in those spectrum bands.

Sprint's high "availability rate" for 5G, according to RootMetrics' figures, is due to the fact that the operator is using 2.5GHz spectrum for 5G, which offers performance and coverage characteristics similar to 3.5GHz.

Finally, it's worth noting that RootMetrics carried out its testing between July and August, and it's likely that US operators' 5G coverage and performance have improved since then. Indeed, Verizon executives have touted threefold improvements in 5G speed and coverage in some markets since the operator launched services in April.

Other data points
But those are just a few of the takeaways from RootMetrics' report. Among other noteworthy findings:

These results largely dovetail with recent findings from OpenSignal, which relies on results obtained from regular consumers as opposed to RootMetrics, which conducts its own tests directly. OpenSignal found that 5G services in the US are around 2.7 times faster than 4G LTE services.

What to conclude from all this? First, 5G is a new technology, while 4G is a much more mature technology, and therefore its performance will likely improve. Further, operators like Verizon and T-Mobile are going to have to engage in some serious work -- or use other spectrum bands -- to spread 5G signals beyond tiny slivers of major metro areas. (Already AT&T and T-Mobile have pledged to launch 5G in their lowband spectrum.)

However, given Sprint's results, they probably won't record the kinds of results that Verizon has managed over its mmWave spectrum. For example, T-Mobile has said that 5G in lower spectrum bands will provide 60-70Mbit/s download speeds.

Finally, operators in the US, South Korea and elsewhere are using the first version of the 5G standard, and future versions of the standard promise a range of fancy new features like ultra-low latency and network slicing.

But it's clear that, here in the early days of 5G, a "fourth industrial revolution" it is not -- at least, not yet.

2020 and beyond
But, according to some 5G proponents, the technology will gain steam in the months and years to come. The GSMA -- the world's largest trade organization for the wireless industry -- predicted in a new report that fully 24% of connections in North America will be on 5G networks by the end of 2022, rising to 46% by 2025 -- equivalent to 200 million 5G connections. [Ed. note: We'll link to the report soon.]

And the organization said North American mobile network operators are going to spend the money to make that happen. "2019 will be the first year where 5G accounts for more than half of operators' capex in North America, reflecting the shift from LTE to 5G deployments," the firm wrote. "This trend will continue through 2020-2025, with 87% of operator capex in North America to be allocated to 5G by the end of the period. Between 2018 and 2025, mobile operators will invest $353 billion in capex in the US, more than in any other country."

Finally, the GSMA reported that, during 2018, mobile technologies and services in general generated 4.2% of gross domestic product (GDP) in North America, amounting to $937 billion of economic value added. "By 2023, mobile's contribution to the North American economy will reach almost $1.2 trillion (4.8% of GDP)," the organization wrote.