Trump's administration is eyeing the construction of a nationalized 5G network as a safeguard against cybersecurity threats from China, according to US government documents obtained by media outlet Axios.

Under one option being considered, the government would pay for and build a nationwide 5G network, effectively nationalizing a section of the country's telecom industry.

The documents, apparently written by an official at the National Security Council, argue that America needs a centralized 5G network within the next three years because of the rising threat from China. 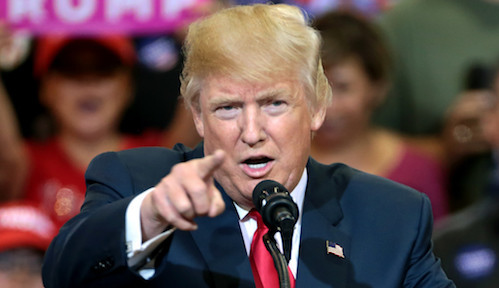 Trump's administration is on the offensive against China.

A Powerpoint presentation that is among the documents Axios obtained says that "China has achieved a dominant position in the manufacture and operation of network infrastructure" and that "China is the dominant malicious actor in the information domain."

The report comes amid signs of rising tension between the US and China, which President Donald Trump has long criticized in discussions about international trade as a threat to US jobs and economic prosperity.

In 2012, concern about possible Chinese interference in the US led government authorities to issue a report describing Huawei Technologies Co. Ltd. and ZTE Corp. (Shenzhen: 000063; Hong Kong: 0763), China's two biggest makers of telecom networks, as a potential security risk, and warning major US operators not to use those companies as infrastructure suppliers.

US hostility toward Huawei and ZTE appears to have risen since Trump became president. A smartphone deal between Huawei and AT&T Inc. (NYSE: T), which operates one of the biggest networks in the US, recently collapsed after security concerns were raised during negotiations, according to a Reuters report. (See Huawei Still Knocking on US Door – but AT&T Deal Thwarted.)

Then, in mid-January, Texan Congressman and staunch Trump supporter Mike Conaway proposed new legislation that would prohibit US authorities from buying any product or service from the Chinese companies. (See Huawei, ZTE Face US Federal Ban.)

Any decision to build a nationally owned 5G network, however, would be a major challenge to operators including AT&T, Verizon Communications Inc. (NYSE: VZ), T-Mobile US Inc. and Sprint Corp. (NYSE: S), all of which are busy preparing for the launch of commercial 5G services.

According to the documents seen by Axios, one government proposal involves building a 5G network and then renting capacity on this to the private sector carriers. Such a move would clearly undermine the investments those operators are making, and the business models they have used.

The alternative plan whereby operators build their own competing 5G networks has been described as "no option at all," according to an Axios source familiar with the documents. The real government debate, says that source, is over whether the government builds the 5G network or whether it forces the carriers to build it as part of a consortium on the government's behalf.

Either way, the scheme would disrupt existing business models to ensure the country ends up with a single 5G network under government control.

The government would also create a process for installing 5G wireless equipment, preventing states and municipalities from developing their own rules about equipment installation, according to Axios.

The documents reportedly go on to say that a model for government-controlled 5G infrastructure could be exported to other countries that are US allies to guard against Chinese interference.

They also lay out concerns that China is winning the battle on artificial intelligence and that "not building the network puts us at a permanent disadvantage to China in the information domain."

Austin Idol 1/29/2018 | 2:44:33 PM
Amazing that a powerpoint presentation that some schmuck could have drafted up and left out in the open is causing this type of stir. Anyone could have fabricated this and look at the Bloggers and Posters falling for it. You will all need help getting the hook line and sinker out of your throats.
Reply | Post Message | MESSAGES LIST | START A BOARD

Duh! 1/29/2018 | 11:31:29 AM
Re: Unlikely Axios published the supposed leaked memo. If it actually came from any USG agency, every page would be marked with a security classification. Looks like the fevered imaginings of some beltway bandit.

Oh, and it it apparently lifted some material from a Heavy Reading report.
Reply | Post Message | MESSAGES LIST | START A BOARD

If you have the original Onion link, please post the link.  I looked through the Onion as best I could and found a story on some 700 pages of faked leaked documents.  None that I saw referenced 5G nor in a way that was as well put together as the presentation on Axios.

I think it is worth noting that the Axios document is rather odd.  It looks like a policy document that has a coherent purpose.  That means (to me) that it had 1 author and probably that person passed it around.  This would create a huge kerfluffle in the Capital Markets and not sure how it would end up.

Austin Idol 1/29/2018 | 9:42:31 AM
Re: Unlikely The original story if you follow back came from The Onion. Lots of people getting punked on this one.
Reply | Post Message | MESSAGES LIST | START A BOARD