The Un-CEO: Legere to Leave T-Mobile

John Legere, one of the most colorful leaders in the telecom industry, will leave as T-Mobile's CEO when his contract ends on April 30, 2020, the operator announced Monday. The CEO position at the self-proclaimed 'Uncarrier' will be taken up by Mike Sievert, the company's current chief operating officer and president .

T-Mobile held a call Monday to announce the leadership move and other management changes. Legere and Sievert both insisted on the call that the moves change nothing about T-Mobile's proposed $26.5 billion merger with Sprint, which the companies hope to close early next year.

"Mike Sievert is absolutely the right choice to become the next CEO of T-Mobile," declared Legere on the call. "The timing of Mike and I has been in the works since 2012," he added later in the call.

Legere had been recently named as a possible CEO successor at WeWork, the troubled shared workspace company. But he denied this today. "I was never having discussions to run WeWork," said Legere, who positioned T-Mobile as the 'Uncarrier' in late 2013 with a set of competitive unlimited service offerings.

This leadership transition has been in the works for a while, T-Mobile says, citing a "comprehensive, multi-year, leadership succession planning process" with Legere's involvement. The main difference being that the Sprint merger was supposed to have closed by now, as Legere commented.

T-Mobile's proposed merger with Sprint still faces opposition from 16 US state attorneys general; their lawsuit against the merger is scheduled to head to court December 9 in a trial that is expected to last two to three weeks.

Sievert and Legere both said on the call that they felt good about T-Mobile winning the case. 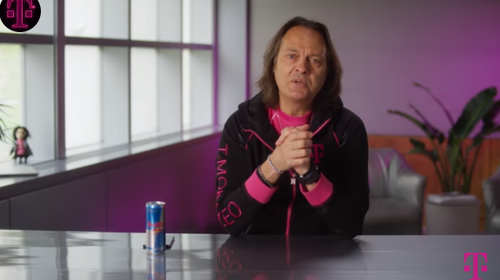 Legere used video messages to good effect during his tenure.

In other management moves at T-Mobile announced today, longtime CTO Neville Ray was awarded an upgraded position as president of technology. Meanwhile, Braxton Carter will stay on as CFO at T-Mobile until at least July 1, 2020, the operator said.