BARCELONA -- MWC 2018 -- T-Mobile pumped the gas on its mobile 5G deployment plans on Tuesday evening -- promising to introduce a next-gen network supporting both high- and low-band 5G in 30 cities in the US in 2018 -- but it won't go commercial with service until devices are available in 2019.

T-Mobile US Inc. 's CTO Neville Ray told reporters in Barcelona Tuesday that the "Un-carrier" will deploy 5G on 600MHz, 28GHz and 39GHz frequencies in those cities this year, including New York, Los Angeles, Las Vegas and Dallas.

The infrastructure will be split "roughly 50/50" between Nokia Corp. (NYSE: NOK) and Ericsson AB (Nasdaq: ERIC). For instance, he said, NYC is an Ericsson city, while Nokia will handle Dallas. (See Nokia makes 5G waves with its ReefShark chip and T-Mobile, Nokia Start Nationwide US 5G Rollout.) 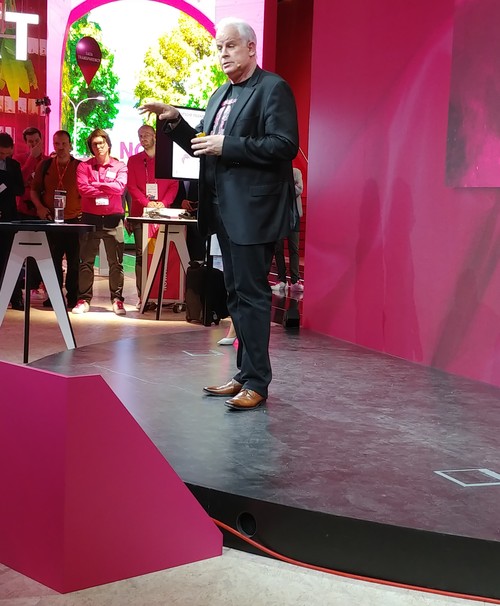 The 600MHz push has already started with "5G-ready" LTE upgrades in the field. The millimeter-wave infrastructure updates will have to wait a little longer, as Ray explained to Light Reading after the press conference.

"To be honest, standards-based 39GHz and 28GHz gear will only be coming in the fourth quarter of this year," the CTO noted. He claimed that T-Mobile has 200MHz of millimeter wave spectrum "across dense urban pops" to play with.

Initially, T-Mobile plans to deploy mmWave to add speed and capacity in urban areas, while Ray acknowledged that 5G small cells might only see a coverage range with 200 meters.

He was also cautious about what exact speeds mobile 5G will offer initially. "I don't know," he said in response to questions, while suggesting that competitors may be over-promising with talk of "multi-gigabit" speeds. Ray suggested he "would love to see" a tripling of average 4G LTE speeds with the initial 5G service.

"Are we going to see average speeds move up by tens of megabits per second? For sure," he said. But he noted that he couldn't promise this would be consistent, at least initially.

"There's a lot to learn" with millimeter wave, he stated, which is partly why T-Mobile is going to deploy in NYC and other big cities, rather than smaller markets, at first.

Ray couldn't resist taking a pop at AT&T's announced mobile 5G plans at the press conference: "Why are we in New York and not Waco? Because New York matters."

As for delivering a commercial 5G service with devices that can run on the network, Ray stated that he was "confident" that "by this time next year," 5G smartphones will be available.

DanJones 3/20/2018 | 8:05:43 AM
Re: Cat People Yeah. Although Ray actually said they were experimenting with millimeter on macro too.
Reply | Post Message | MESSAGES LIST | START A BOARD

The latter 2 would be deployed on Small Cells that would have the 200m range mentioned.

Albeit with much lower bit-rates than the Small Cells, 600MHz has a range of around 3 times that of PCS 3G services and easily 20mile+ range.
Reply | Post Message | MESSAGES LIST | START A BOARD

kq4ym 3/12/2018 | 8:43:42 AM
Re: Cat People The 600 foot or so range will certainly cause some planning to be aborted or revised as provider attempt service in less than very populated areas. A two-football field range is not going to be helpful out in the rural areas.
Reply | Post Message | MESSAGES LIST | START A BOARD

mendyk 3/2/2018 | 12:13:11 PM
Re: Cat People Some would point out that many rural areas are particularly dense. But a different kind of dense, maybe.
Reply | Post Message | MESSAGES LIST | START A BOARD

DanJones 3/2/2018 | 10:53:32 AM
Re: Cat People Dense urban areas in cities will be first to go 5G, there's really no question about that now. Chris Schmidt at Verizon told me they could be looking at filling in less populated areas later if there are commercial reasons to do. After 2020 or so? Maybe. In the initial rollouts? Not so much.
Reply | Post Message | MESSAGES LIST | START A BOARD

mendyk 3/2/2018 | 9:41:19 AM
Re: Cat People At this point, 5G is a prime example of marketing nonsense run amok. The economic reality check will come later -- it's part of the hangover phase that telecom can't seem to avoid.
Reply | Post Message | MESSAGES LIST | START A BOARD

Rhodes1 3/2/2018 | 7:17:01 AM
Re: Cat People The word was 'commercially'. I'm not going to be paying extra for my kids to get 2Gbps on the motorway. So who pays for premium sites on highway lighting/gantries etc?

That 4K can be delivered by C-Band macros, and if it can't well either they either pre-load the movies or accept a transcode to FHD.

Show me the money.

I guess New York is more of a place people "love to hate". Sure, it's fun to say nasty things about it and the people who live there. But then it's kinda neat to visit it and do cool stuff that you can't do back home.
Reply | Post Message | MESSAGES LIST | START A BOARD