Mobile customers in the US now hold onto their phones for an average of six years before buying a new one, according to one estimate, which is twice as long as they did in 2012.

That's creating a real concern among the US wireless industry executives charged with managing the transition from 4G to 5G. There's no way for wireless network operators to quickly cash in on all the benefits of 5G if a good chunk of their customer base is planning to keep their current 4G phone until 2025 or later.

The situation could allow some mobile customers to skip 5G altogether if they hang onto their 4G phone long enough and 6G makes an early appearance.

One Wall Street research firm said things may not get any worse. "We suspect 1Q19 could be the trough levels for industry upgrade rates," wrote the analysts at Cowen in a recent research note to investors. "We expect upgrade rates to remain near current levels (adjusted for seasonality) with the exception of some volatility around iconic device launches."

Plummeting handset upgrade rates
The so-called "upgrade rate" is the number of customers who purchase a new phone each quarter. This is a critical metric for wireless network operators because the only way they can implement new technologies is by both installing new transmitters onto their cell towers and then also by getting customers to upgrade their handsets (phones).

During the heyday of the smartphone -- think 2012 or so -- mobile customers couldn't wait to upgrade to the latest and greatest. Remember how shoppers would camp out for days in order to get the latest iPhone? At the time, operators like T-Mobile sought to encourage that trend with promotions like Jump. The situation was ideal for wireless network operators keen to move large numbers of customers onto their latest network technology, 4G LTE.

As the Wall Street research analysts at Nomura's Instinet wrote in a recent report for subscribers, the "replacement rate" hovered around the three-year mark in 2012, meaning that mobile customers typically purchased a new phone every three years or so at that time.

But things have been changing since then. The analysts at Nomura's Instinet pointed to three big reasons why mobile customers today are hanging onto their phones for longer and longer periods:

As a result of the above, the analysts at Nomura's Instinet believe mobile customers today are holding onto their phones for an average of six years. 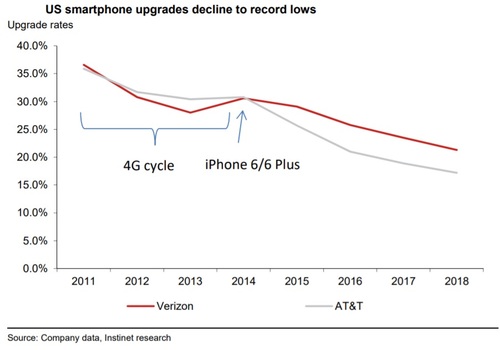 "With phones approaching $1,000-plus, what you're seeing is really an elongation of a handset lifecycle. Right now, it's about 34-35 months for a smartphone," T-Mobile's outgoing CFO Braxton Carter bemoaned way back in March of 2018.

This creates a range of problems for operators, Carter explained, because customers often reconsider their provider options when they buy a new phone. He said that's partly how T-Mobile has managed to steal so many customers from the likes of AT&T and Sprint -- when customers of those carriers decide they're going to buy a new phone, they also start shopping around for a new provider as part of that decision.

Switching providers is possible outside of a new phone purchase, but is often much more difficult considering customers' existing phones may not support all the spectrum bands and network technologies of competing carriers.

But, according to the analysts at Cowen, the handset upgrade rate might be smoothing out this year considering AT&T hit record-low levels of handset upgrades in the first quarter of 2019. "AT&T led the way with an upgrade rate of 3.5%, the companys lowest ever, down from 4.3% in 1Q18," the firm wrote. "Overall, upgrades were at a historical low during 1Q19 as the phone elongation story continues." 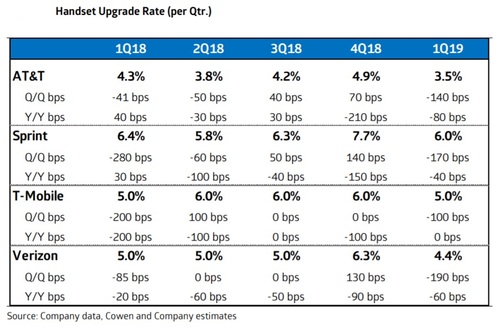 The analysts said the situation likely would stabilize in coming quarters. "Upgrade levels may be at trough levels but should remain at relatively low levels with the exception of some volatility around iconic device launches," they wrote.

What this means for 5G
US operators are in the very early stages of switching on their 5G networks -- and it's clear that they're not too concerned about getting customers to switch over to those networks right now.

First, and most importantly, today's 5G phones sit almost exclusively at or above the $1,000 threshold. That's an eye-watering price for just about anyone outside the 1%. It's also a noteworthy price tag because it means no operator is putting much promotional effort into their 5G phone sales. If operators wanted customers to move to 5G quickly, they would at the very least provide discounts on 5G phones to encourage customers to buy them. That hasn't happened in the US, at least not yet.

There are some indications that at least some mobile customers are actively seeking out 5G phones. "Consumers are buying 5G capable devices across the country despite not having a 5G network available in most cases," Tom Kang, research director at Counterpoint Research, said in a release. Kang explained that cities like Dallas, Houston and Los Angeles showed 5G phone sales in May at higher rates than in Minneapolis, where 5G service was available.

However, according to a separate survey, that kind of 5G attentiveness could backfire. According to a survey of 2,000 US smartphone owners conducted in late May by Decluttr, one-third of Americans said they already own a 5G-capable device (AT&T, we're looking at you).

Research firm Canalys maintains a relatively rosy outlook for 5G phone sales, predicting that vendors will ship a combined 1.9 billion 5G smartphones in the next five years, overtaking 4G in 2023. According to a new report from the Global mobile Suppliers Association (GSA), there are now a total of 39 vendors globally that have announced a total of 90 different 5G products destined for networks around the globe.

But Canalys cautioned that the growth in 5G would largely be due to equipment and handset vendors in China: "5G smartphones will see rapid adoption in China, thanks to a strong government technology roadmap and operators' financial capabilities. China is also home to many major 5G equipment suppliers and smartphone vendors, which will be responsible for an aggressive marketing push over the next few years," Canalys' Nicole Peng said in a statement.

Here in the middle of 2019, there will be two key milestones to look for as the US wireless industry hurdles toward a 5G future. The first is when operators like AT&T and T-Mobile launch 5G nationwide. If they offer promotions and phone discounts around that event, that could be a signal that they're serious about the 5G transition.

The second milestone will be Apple's release of a 5G iPhone. If that results in serious sales, it will signal broad consumer interest in both 5G services and 5G devices.

Either way, the analysts at Nomura's Instinet aren't expecting much: "5G [is] an unlikely catalyst for a refresh," they wrote, adding that "we consider 4G speeds of (20Mbps and rising) easily sufficient for consumers to enjoy today's most intensive applications, including streaming  5G does offer operators improved network efficiency, which we believe means less from the consumer value perspective. We do not expect carriers to offer incentives to migrate to 5G handsets."

cojewazo 7/16/2019 | 9:39:57 AM
romy I essentially started three weeks past and that i makes $385 benefit $135 to $a hundred and fifty consistently simply by working at the internet from domestic. I made ina long term! "a great deal obliged to you for giving American explicit this remarkable opportunity to earn more money from domestic. This in addition coins has adjusted my lifestyles in such quite a few manners by which, supply you!". go to this website online domestic media tech tab for extra element thank you .
Click Here>>> 𝐰𝐰𝐰.𝐆𝐞𝐨𝐒𝐚𝐥𝐚𝐫𝐲.𝐜𝐨𝐦