There is one definitive thing you can say about 5G service: it makes carriers happy.

The mood in Irving yesterday during Sprint's 5G launch event was more than upbeat. Execs greeted one another with hugs, not handshakes. The relatively small group made some noisy hallway chatter following the press conference.

"This is a day I hope all of you in this room will never forget the launch of 5G and the launch of this new wireless generation," said Michel Combes, president and CEO of Sprint, as he took the stage to kick off the event.

They certainly won't forget the bill. To get 5G service, customers will need to sign up for Sprint's Unlimited Premium plan; the plan costs $80 a month, and it includes Hulu and Amazon Prime.

Earlier, a group of media gathered to talk about the 5G network with Sprint's CTO John Saw. He touted the advantages of Sprint's spectrum position (in the 2.5GHz band) but noted that carriers, in the long run, would create the most value for their customers by providing low-, mid- and high-band spectrum.

Saw said that when Sprint launches its first nine 5G markets -- four were launched yesterday -- the carrier will reach about 11.5 million people, covering nearly 2,180 square miles with 5G service. "That is why I'm confident in telling you that this is probably going to be the largest initial 5G launch in terms of coverage and footprint," Saw said.

For the most part, the industry hype has far outrun the promise of 5G. And Sprint, as a company, has had a lot of false starts, a lot of setbacks in the last decade (or longer).

But on the subject of 5G, they can't be dismissed. On AT&T's network and Verizon's network, you can't currently buy a smartphone that gets a 5G signal in Dallas or Fort Worth. You can get 5G service on a smartphone in those markets with Sprint. Does that make Sprint the first carrier to market with a 5G mobile service?

Here are a few scenes from the press event announcing Sprint's 5G service in Dallas. 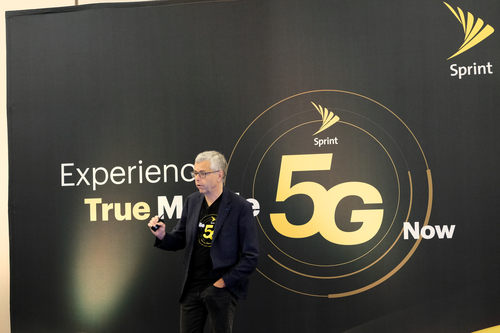 Michel Combes, president and CEO of Sprint, talked about Sprint's journey to 5G and how the company can only fulfill its 5G promise completely if it is allowed to merge with T-Mobile.

MarkWills 3/3/2020 | 9:44:03 PM
Major Leap in Wireless Technology 5G wireless technology perspective made its headlines in 2018. Now its becoming a reality. Congrats Sprint for taking a major leap wireless technoloy. It said that this connection could improve the quality of your internet speed.
Reply | Post Message | MESSAGES LIST | START A BOARD

HankGilbertson 12/28/2019 | 12:45:02 AM
Amazing Developments Love the advancement of our wireless technology. We've come so far in such a short amount of time.

patsm00re 11/6/2019 | 9:20:59 PM
Scenes From Sprint's Big 5G Launch Pretty wonderful content. That i really stumbled upon your blog page together with imagined to say that have seriously enjoyed reading your weblog items.  spider solitaire classic
Reply | Post Message | MESSAGES LIST | START A BOARD

Dexter was clearly not an average killer.....