Video to dominate mobile traffic
Video, the study predicts, will represent 79% of mobile data traffic in 2022, up from 59% in 2017. By comparison, Cisco's latest Visual Networking Index (VNI) study, which was released in November 2018 and factors in both fixed and mobile traffic, predicts that video will represent 82% of global Internet traffic by 2022, up from 75% in 2017. (See Terabyte Households Surge as Video Eats the Internet .) 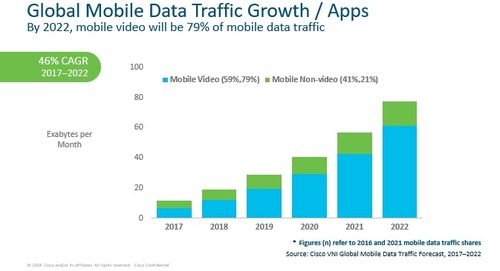 By 2022, Cisco also expects annual global mobile data to flirt with the zettabyte (1,000 exabytes) milestone, with an annual run rate of roughly 930 exabytes per year, which equates to 113 times the mobile traffic generated in all of 2012 (8.2 exabytes). By that time, mobile traffic will represent about 20% of global IP traffic, Cisco said.

The study predicts that total mobile connections will grow from 8.6 billion in 2017 to 12.3 billion in 2022, At the same time, mobile data traffic will surge to 77 exabytes per month in 2022, representing a compound annual growth rate of 46% over the study's five-year snapshot.

That usage data could cause some carriers to reassess their data-usage policies and the ways they monetize their networks, Thomas Barnett, director of service provider thought leadership at Cisco, said, "The demand for the networks never seems to go away... But it's about what the consumer is willing to pay."

Smartphones -- including 'phablets' -- are set to exceed 50% of total mobile devices/connections by 2022, with machine-to-machine being the next closest category.

M2M trends
The study sees global M2M connections reaching 3.9 billion by 2022, up from 1 billion in 2017 -- a CAGR of 32%. Also by 2022, M2M modules will represent 31% of total global mobile devices and connections. But, given their small data usage, the modules will account for just 2% of mobile data traffic, according to Cisco's forecasts.

Among M2M categories, connected home will be the top use case, outpacing areas such as connected cars, connected healthcare, manufacturing and supply chain, and energy. 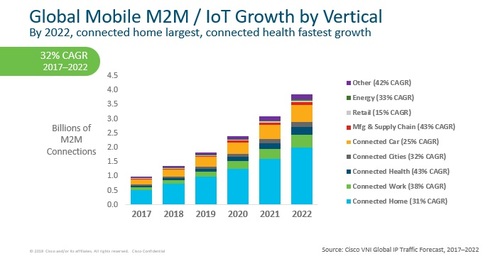 Also by 2022, Cisco believes that 9% of connected wearables will have embedded cellular connectivity, compared to 3.7% in 2017.

Whipping up more WiFi
Speeds over WiFi -- a technology that remains key to cable operator wireless strategies -- are set to double, from 24.5 Mbit/s in 2017 to 54.2 Mbit/s in 2022. Cisco's study predicts that 59% of mobile traffic will be offloaded by WiFi in 2022, a CAGR of 50%. Of note: In 2017, monthly WiFi offload traffic of 13 exabytes exceeded monthly mobile/cellular traffic of 12 exabytes.

The number of global public wireless LAN and community hotspots is expected to reach 549 million in 2022, up from 124 million in 2017, with the Asia-Pacific region to be home to 45% of them, Cisco's forecast found.

Offering a bigger view of the mix of fixed and mobile global IP traffic by 2022, Cisco said 29% will come from wired connections, 51% via WiFi and 20% from mobile/cellular.